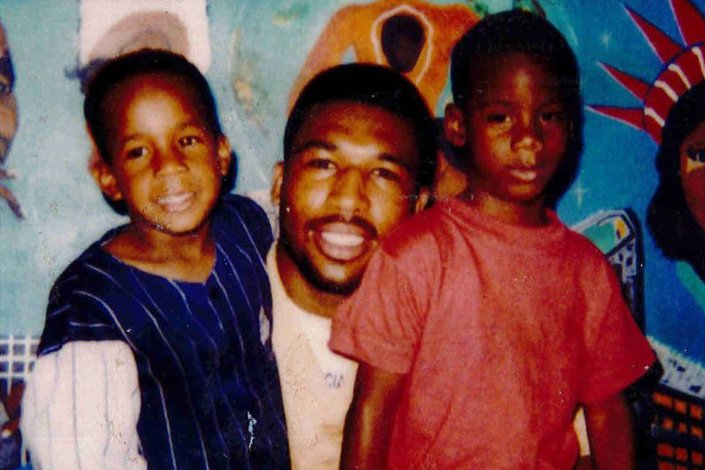 In this photo taken in 1991, Anthony Wright, center, is pictured with his son Anthony Wright Jr., left, and his nephew, who was not identified. On Tuesday, Aug. 23, 2016, a jury found the older Wright not guilty of charges stemming from a 1991 rape and murder in Philadelphia's Nicetown neighborhood. Wright previously had been found guilty of the charges in 1993 and served more than 20 years in prison before DNA evidence linked the crime to another man, and Wright was granted a new trial.

Anthony Wright filed a lawsuit Tuesday against the city of Philadelphia and the police after he wrongly spent 25 years behind bars for the rape and murder of his neighbor, Louise Talley, 77, in her Nicetown home in 1991.

Wright was sentenced to life without parole until he was exonerated in August by DNA evidence and help from the Innocence Project of New York. New technology found that DNA left on Talley's body belonged to another man – Ronnie Byrd, who was addicted to crack cocaine and died when he was in prison at the age of 62, the Inquirer reported.

The complaint, published in full by Philadelphia Magazine, accuses the Philadelphia police officers involved in the investigation of "egregious misconduct."

It also accuses the police of "forcing" Wright to sign a written statement that did not include any narrative from him.

"...Mr. Wright's wrongful conviction was the direct result of the unconstitutional and otherwise improper policies, practice, and customs of the PPD, including the Homicide Unit, which, for a period starting as early as the 1970's and continuing through the investigation in this case and for years thereafter, evidences deliberate indifference by the Defendant City of Philadelphia to practices of coerced confessions, fabrication of evidence, witness intimidation and coercion, suppression exculpatory evidence, and abuse of authority."

Wright, 44, is being represented by attorneys at Neufeld, Scheck & Brustin LLP as well as Kairys, Rudovsky, Messing & Feinberg, LLP.

Mike Dunn, a spokesperson for the city, told Philly.com that officials were reviewing the suit.

Unlike many other states like Massachusetts and Texas, Pennsylvania doesn't make it necessary for those who have faced wrongful convictions to be rightfully compensated.

Pennsylvania State Sen. Stewart Greenleaf did sponsor a bill in May that would award those who are wrongfully convicted of a crime a minimum of $50,000 for each year spent in prison.

"Hopefully, the legislature will now make amends and create a statute that would compensate people like Tony Wright," Peter Neufeld, co-founder of the Innocence Project, told NewsWorks in August.