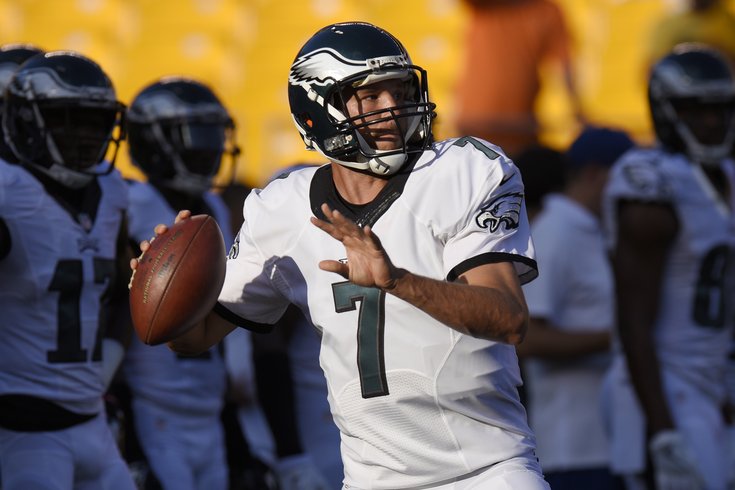 Philadelphia Eagles quarterback Sam Bradford warms up prior to the Eagles preseason game against the Pittsburgh Steelers on Thursday night.

One of the tangential effects of Chip Kelly's departure from Philadelphia is the impact his absence is having on the value of Eagles players in fantasy football drafts.

Despite being unable to keep his job following his first sub-.500 season at the helm, Kelly's impact on his players' apparent worth to potential fantasy owners is without question. Worst case scenario, his uptempo style was going to guarantee your players more opportunities to rack up statistics than the average player at the same position.

Best case scenario and you're looking at Nick Foles in 2013 (27 touchdowns and just two interceptions). Or LeSean McCoy (2,146 yards from scrimmage and 11 total touchdowns). Or DeSean Jackson (82 receptions for 1,332 yards and nine touchdowns). Hell, he even made Riley Cooper (835 yards and eight touchdowns) a legitimate fantasy receiver that year.

Each of those numbers -- literally every single one listed for each of those four players -- was a career high, numbers that none one of them have been able to replicate in either of the two seasons since.

Still, there was plenty of reason for optimism going into Kelly's third and final season. There was a new quarterback in Sam Bradford. DeMarco Murray, the NFL's leading rusher a year earlier, joined Ryan Mathews in the backfield. Jordan Matthews was coming off a stellar rookie season and the team had just spent its first-round pick on Nelson Agholor. Fantasy prognosticators were even high on the Birds defense; they finished 2014 ranked sixth in the NFL in takeaways, including four returned for touchdowns. Add to that an NFL-high four return touchdowns by Darren Sproles and the rest of the special teams, and you can see why people expected more from them last year.

Here's a look at the average draft position (as well as positional rankings) for Eagles players a year ago, prior to the 2015 season:

*Based on average draft position on six different fantasy sites, compiled by FantasyPros.com and TheBigLead.com.

This year, however, there's been a huge drop in the value for most of these guys -- some due to subpar play last season (see: Agholor, Nelson) but others that can only be explained by the arrival of first-year head coach Doug Pederson, who will be running a much more traditional scheme on offense. And even the small sample size so far this preseason hasn't been all that appetizing (27 offensive points in two games, much of it coming off field position created by the defense).

Just take a look at where those guys (or their expected replacements) are going in 2016 drafts, according to FantasyPros.com's aggregate ADP rankings, and specifically how that compares to last year:

With the exception of Mathews, who has gone from playing second-fiddle to DeMarco Murray, and Zach Ertz, who is poised to break out for the third straight season, the ADP of Eagles players is down almost across the board.

And in the cases of Sam Bradford, Agholor and the defense, they aren't even getting taken in your average 10-team draft.

I'm also kind of speaking from experience. My league held its annual fantasy football draft on Friday night, and it took quite a while for the first Eagles player to go. It's not exactly an apples-to-apples comparison since our league is PPR and the above rankings and ADP based on standard scoring. Still, it wasn't a great night for Pederson's guys. Here's a look at where they went in our 10-person snake draft:

*I was the one who took J-Matt, and was pretty happy to get a team's unquestioned No. 1 WR with the second to last pick of the 8th round.

As you can see, only four players were taken this year -- and if it wasn't for someone deciding to draft a second defense in the last round, it would've only been three. With nearly the same group of fantasy owners, there were more than twice as many Eagles taken a year ago.

That being said, let's take a look at why -- beyond the new (old) system in which they'll playing -- so many Eagles have seen their draft stock take a big hit this summer.

SAM BRADFORD:  Kelly's system was very quarterback friendly, and Bradford's numbers last season would have been better had it not been for an obscene amount of dropped passes by his receivers. And this season, he's going to be throwing to more or less the same guys (with the addition of Dorial Green-Beckham). That's not really a reason for a lot of optimism given that he's learning his 473rd offense since being drafted first overall by the Rams in 2009.

RYAN MATHEWS: One of the few players who actually saw his value go up, Mathews is still being drafted well below where he would have been in Kelly's final year if he was projected to be the feature back. Even still, his ADP in PPR leagues hasn't gone up all that much because with Murray above him on the depth chart, Mathews was expected to be used a lot on passing downs in his first year in Philly. Now that he's the starter, you can expect to see more Darren Sproles in those situations.

DARREN SPROLES: You'd think he's in line for a larger percentage of the team's carries this season, especially on those aforementioned passing downs. Sure, he's getting up there in age, but given his limited workload over the years, he's likely got more left in the tank than your average 33-year-old back. The only real explanation for him dropping nearly three rounds (and almost out of the draft entirely) is that the Eagles aren't expected to run as many plays under Pederson, meaning that larger percentage of carries may be coming from a much smaller pie.

JORDAN MATTHEWS: Now in his third year, Matthews may have scared off some potential owners last year with inconsistent fantasy scoring that was due to a combination of drops, sub-par quarterback play, and opposing defenses being able to focus on him in the passing game. He recorded six double-digit games last season, including in the first two weeks and last three weeks of the season, but in his other 10 games, Matthews failed to reach double digits seven times. That includes a stretch of seven games in which he scored 10 or more points just once.

NELSON AGHOLOR: Even if you took him with as a flyer in the final round last year, the USC product left you disappointed last season. But if you took him where he was projected (one spot above Jacksonville's Allen Robinson), then I really feel bad for you. Robinson finished sixth among receivers in PPR scoring, one spot behind Odell Beckham, Jr. and one spot above Larry Fitzgerald. Meanwhile, Agholor caught just 23 passes for 283 yards (one touchdown), reached double-digit fantasy points in only one game, and in six of his games, he failed to record a single catch. Add to that the addition of DGB on the outside for the Eagles, and his 2016 outlook begins looking worse and worse.

So while it's clear that no longer playing in Chip's offense is having an impact on the Eagles' ADP, they didn't do much last year to offer fantasy players a reason to think that they'll be very productive without him.