Anti-violence activist: 'Jim Kenney ain't out here in the streets' 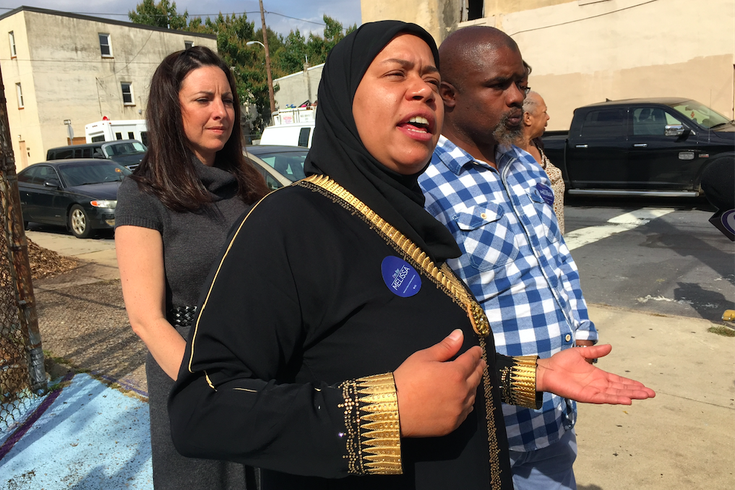 Two days after a pair of bullets fired by gunmen on bicycles near the 8th and Diamond Playground found a 40-year-old man’s leg, mayoral candidate Melissa Murray Bailey and community activists decried the proliferation of gun violence and chided Jim Kenney’s absence from crime scenes.

Standing across the street from chalk outlines of some of the 36 casings found after Wednesday night's shooting, Bailey spoke generally about the need to stop gun violence, address the schools-to-prison pipeline and build better relationships between police and the communities they serve.

Bailey, the Republican facing off against Kenney (a Democrat) and a trio of third-party candidates in November’s general election, also said she would release a “safety plan” next week.

That plan, she said, will center, in part, on her hope that the “police force [will] have eight hours a month dedicated to engagement and community activities, whether that is playing in a basketball league with the kids or working in after-school programs.”

“A mayor is a critical job for the city of Philadelphia, and Jim Kenney is not out here on these crime scenes seeing the deplorable conditions of the people." – Terry Starks, who "built" the Philadelphia CeaseFire program

Should Police Commissioner Charles Ramsey not want to remain on the job in a Bailey administration, she would look for internal candidates “like [First Deputy Commissioner] Richard Ross,” she said.

“One of the reasons I decided to run for mayor was because of a shooting at the playground my daughter plays at,” said Bailey, who lives in Society Hill. “This happens in all neighborhoods across the city, and we have had an extremely violent summer.

“We’ve had kids getting grazed by bullets. We’ve had shootings on playgrounds and at neighborhood picnics, and yet, nobody is talking about this. We are in a time of crisis in our city. People in this neighborhood are afraid to come out of their house because of the violence that’s happening, and nobody’s been asking us, throughout this race, what are we going to do about it?”

She then discussed the need for better schools, along with expanded after-school activities for city youths, and efforts to partner with community activists like the pair who flanked her near the gate to the playground: Terry Starks and Melissa Taylor.

“If we’re ever going to stop the school-to-prison pipeline, it has to be the school-to-jobs pathway so every kid in the city can see a future for them,” Bailey said, noting that she’ll campaign in neighborhoods like this one in coming weeks.

When the conversation shifted to a perceived lack of interest and conversation about gun violence, Bailey noted, “It’s happening in neighborhoods where people aren’t going.”

“I haven’t seen any other politicians in the neighborhoods where we are working and we’re serving,” she said, alluding to mandatory minimums for some weapons offenses. “So, if it’s not happening in front of my face, it must not be happening. No parents should worry about their kids at the playground, yet they do.”

For her part, Taylor – “better known as Ma Dukes from Wynnefield” – focused on the lack (or slashing) of after-school and community programs for youths.

Starks – who “built” the Philadelphia CeaseFire program – said a lack of response from City Hall and the Kenney campaign led him to support Bailey after an April mayoral forum at Dobbins High School in North Philadelphia.

“I love Jim, but Jim ain’t out here in the streets,” said Starks. “Me and Melissa have been on crime scenes. I’ve taken her to vigils so she can see the people. In order to run the city, you have to meet the people.

“Right now, I don’t think Jim Kenney has proven himself, so I’m rolling with Melissa Murray Bailey day in and day out, trying to save this city. … I have five bullets lodged in my chest from this community, and I fight this fight from a community standpoint.”

He also decried a political structure that seemingly, to him, just hands people jobs rather than making them earn them.

“A mayor is a critical job for the city of Philadelphia, and Jim Kenney is not out here on these crime scenes seeing the deplorable conditions of the people,” said Starks, who no longer leads the program he launched. “Right now, we’re in the middle of the war zone, and we’re out here.

“It’s a shame that a female would be able to come out here and not a male, and I’m just being honest. I don’t have anything against the Kenney administration, but as a community leader, I just can’t get no help from them.”

Asked for a response, Kenney campaign spokeswoman Lauren Hitt said the candidate has discussed issues related to those discussed at the press conference throughout the race.

"Jim Kenney has run for mayor on the promise that he will fight to increase economic security and public safety in every neighborhood, and he has built a coalition of stakeholders and community activists from across the city to match," Hitt said. "His work on marijuana decriminalization and sanctuary city law as a city councilman disproportionally benefited Philadelphia's low-income communities, and he continues to campaign for policies like universal pre-K, community schools, bail reform and focused deterrence that will improve life for all Philadelphians."