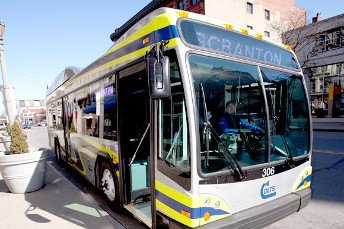 Pictured is a County of Lackawanna Transit System bus.

An atheist group's lawsuit against a Pennsylvania bus system has been allowed to move forward.

The lawsuit, filed last year, alleges that the County of Lackawanna Transit System rejected an advertisement from the Northeast Pennsylvania Freethought Society but allowed ads from other religious organizations, such as churches.

As noted by Washington Post legal blogger Eugene Volokh, a motion from COLTS to have the lawsuit thrown out was denied Wednesday.

The proposed ad read "atheists" and included a website link as well as the name of the organization on a blue background.

This ad was rejected by a Pennsylvania transit group because of a policy banning religious messages from their buses.

COLTS rejected the ad in 2014 citing a policy that bans any ads that "promote the existence or non-existence of a supreme deity, deities, being or beings."

However, the transit system accepted numerous ads from other organizations that violated their policies, including three churches and one Christian group, the lawsuit alleges.

In the ruling Wednesday, the judge wrote that this evidence provided by the organization warranted plausible first amendment claims against the transit system.