Atlanta Jesuit schoolers join hundreds on floor at The Prep 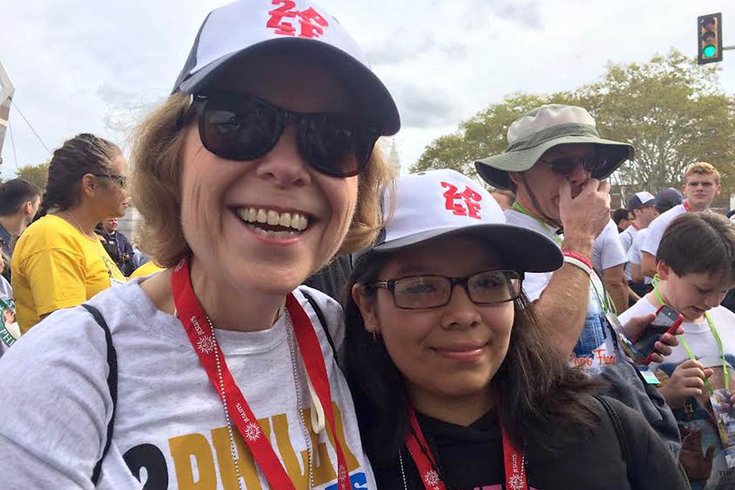 Diane Bush, assistant principal of Cristo Rey Atlanta Jesuit High School in Atlanta, and Jaqueline Montes-Espericueta, 15, are among hundreds of Jesuit students sleeping on floors at St. Joseph's Prep in North Philadelphia for the papal visit.

There may only be one Jesuit high school in all of the state of Georgia, but it wasn't about to miss the historical papal visit to Philadelphia.

They are part of the more than 400 young guests who are sleeping on the floors at St. Joseph Prep in North Philadelphia, arrangements that have made it easy for them to meet boys and girls from other Jesuit high schools in Canada, Puerto Rico and across the United States.

“I feel like the pope is one of us, don’t you?” Bush said to Jaqueline. "He does not take on any of the trappings of the rich. He wants to be among the people.”

Cristo Rey serves a predominantly poor population – half Hispanic and half African-American.

The election of a Jesuit to the Holy See “set a different tone in the Catholic Church," Bush said. “He’s given people a lot of hope.”

On Saturday night, they are heading to Independence Hall to hear Pope Francis' speech on immigration.

“I have students who live in fear that their parents will be deported,” Bush said, adding the father of one of her students was recently deported.

Bush thinks we have already seen the pope’s influence in American – with U.S. House Speaker John Boehner's resignation coming one day after meeting and talking with the pontiff.

“He listened to his conscience” and realized he could not lead Congress anymore, she said.

Jaqueline, apparently a close follower of the 2016 presidential race thus far, is hoping the pope can wield his political influence again.

“He needs to talk to Donald Trump,” she said.