Filming for "Audrey's Children" began in Philly recently. The movie, due out in 2023, will star Natalie Dormer as the pediatric oncologist 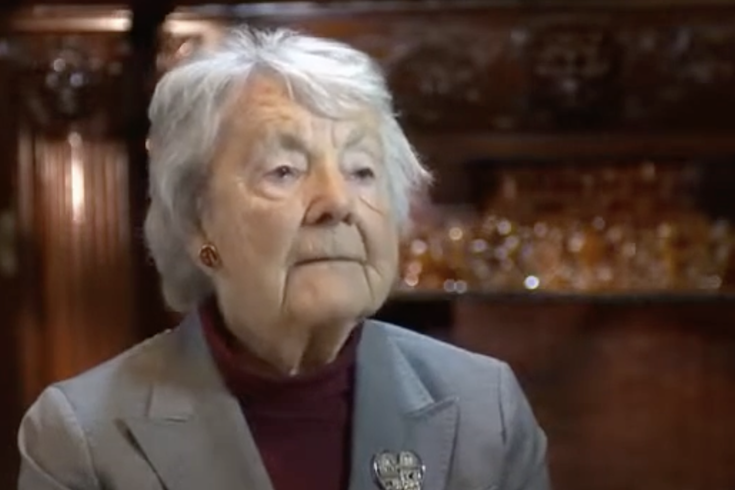 Dr. Audrey Evans is the subject of the biopic, 'Audrey's Children.' She is a pediatric oncologist whose work at the Children's Hospital of Philadelphia led to advancements in neuroblastoma treatment. Evans also co-founded the Ronald McDonald House Charities. Natalie Dormer, from 'Game of Thrones,' will portray her in the film due out in 2023.

Another high-profile movie project began filming in Center City recently, as production got underway on "Audrey's Children," a biopic about the groundbreaking work of pediatric oncologist Dr. Audrey Evans at the Children's Hospital of Philadelphia.

Evans, a native of England, is world-renowned as the "Mother of Neuroblastoma" for improving the treatment options and survival rates of one of the most common forms of childhood cancer. Evans also co-founded the Ronald McDonald House Charities, which got its start in West Philly, and she is regarded as a trailblazer for women in the male-dominated medical profession of the 1950s and 1960s.

Dormer is joined on the cast by New Jersey-native and Bloomsburg University grad Jimmi Simpson, who is known for roles in "The Newsroom" and "House of Cards." Simpson plays Evans' longtime colleague and late husband, Dr. Dan D'Angio.

Clancy Brown, who was in "The Shawshank Redemption" and most recently"Dexter: New Blood," will play Dr. C. Everett Koop, the former head of pediatric surgery at CHOP and later U.S. Surgeon General. Koop recruited Evans to Philadelphia in 1969, putting her in charge of the hospital's new Children's Cancer Center that became ground zero for a revolutionary treatment approach that has saved millions of lives.

The screenplay for "Audrey's Children" was written by Julia Fisher Farbman, who is also a producer on the movie. Farbman interviewed Evans in 2016 as part of her "Modern Hero" series on Amazon Prime.

Who Is Dr. Audrey Evans?

Born in York, England in 1925, Evans grew up in a middle-class family and was exposed to hospitals at a young age after suffering from chronic bouts of tuberculosis. Her experiences inspired her to pursue a career in medicine, despite the pervasive sexism and discouragement that pushed women away from the field.

In the early 1950s, Evans trained at the Royal College of Surgeons in Edinburgh, Scotland, where she was the only woman in her program. She initially struggled with her medical education due to problems with memorization, but excelled after changing the way she studied — focusing on listening-based learning methods instead of reading volumes of text.

After earning her degree, Evans was awarded a prestigious Fulbright fellowship to continue her training with a residency at Boston Children's Hospital. She studied under Dr. Sidney Farber, a trailblazing pathologist and leukemia researcher known as the father of modern chemotherapy. She also spent a year at Johns Hopkins University in Baltimore before returning to England at the Royal Infirmary Teaching Hospital.

In the "Modern Hero" interview, Evans reflects on her experience being among the few women – and sometime only woman – in her field. She says she was never deterred her from her mission to help children.

"I wouldn't call it hard," Evans says of being surrounded by men. "More amusing."

Following a stint at the University of Chicago's hematology and oncology unit in the 1960s, Evans got her major break in 1969. Koop, then the surgeon-in-chief at CHOP, wanted to create a new pediatric oncology unit that could change the fortunes of cancer patients and their families, who had little hope for recovery after a diagnosis at that point in time.

"That's why I came to Philadelphia, to take care of children with cancer," Evans, now 97 and retired, told Farbman in 2017. "Because at the time I came, there wasn't much else you could do but care."

Much of Evans' work at CHOP focused on neuroblastoma, one of the most common solid tumors seen in childhood cancer patients, which typically appear before a child turns 5. The rare disease occurs in about 700 children every year in the United States, and it is the result of developmental abnormalities in nerve tissue.

While at CHOP, Evans' research led her to create a staging system for neuroblastoma that helps identify which patients would respond best to different treatments. She studied how the locations of tumors and their behavior could be used to determine prognoses for patients, including the option for no treatment at all if it meant sparing a child's suffering in terminal cases.

After Evans implemented her staging system at CHOP in 1971, the approach was credited with increasing survival rates among neuroblastoma patients from about 10% to 50%. She co-founded the National Wilms Tumor Study in collaboration with leading neurosurgeons and radiation therapists in order to advance data-based research.

The model Evans spearheaded has been used as the basis for further advancements and modifications, and it has been adapted to new research, further improving survival outcomes closer to a rate of 75-80% of patients. The Advances in Neuroblastoma Research Conference, still held every two years in the U.S. and Europe, is another lasting piece of her legacy that continues to yield advances in pediatric oncology.

A 'Total Care' Approach and the Ronald McDonald House

Perhaps the most significant contribution Evans made to pediatric oncology is a broader commitment to integrative medicine. The "total care" approach that she implemented at CHOP emphasizes the social and family needs of patients, in addition to their medical care.

The property had room for seven families and was intended solve the problem of lodging for long-distance travelers, who had come to Philadelphia for their children's cancer treatments. As a fledgling organization, it received financial support from the sale of McDonald's Shamrock Shakes, around St. Patrick's Day, after the founders approached the fast-food restaurant about a partnership.

The Ronald McDonald House later moved to 3925 Chestnut St., an expanded facility with more rooms and better resources. The concept evolved to include summer camps and entertainment that brought patients closer with young siblings and other family members, who could take advantage of on-site amenities that ease the burdens of day-to-day life during treatment.

The Ronald McDonald House Charities was officially established in 1984 and has since expanded to more than 360 locations in 63 countries, providing comfort and support to millions of families worldwide. A second location in Philadelphia opened in 2008 at Front and Erie streets, accommodating 20 families each night, and the organization also has developed a mobile medical care unit.

After serving as CHOP's Oncology chair for 20 years, Evans partially retired in 1989 and continued her work on neuroblastoma in the lab for another 20 years. She went on to co-found the St. James School in the Hunting Park neighborhood of North Philadelphia. The private, tuition-free Episcopal middle school aims to address inequities through education.

Over the years, Evans has received a number of awards and recognitions, including the Distinguished Career Award from the American Society of Pediatric Hematology/Oncology and the William Osler Patient Oriented Research Award from the University of Pennsylvania. She also earned the Lifetime Achievement Award from the Advances in Neuroblastoma Research Association.

The exact release date for "Audrey's Children" has not been determined, but the film is expected to hit theaters in 2023. The plot of movie will center on the time after Evans arrived at CHOP.

"This film brings to light a woman who has spent her entire career ferociously dedicated to saving the lives of children and supporting families who have gone through unimaginable challenges," Dormer said in an interview with Deadline. "Audrey has done so with great heart and modesty. I'm honored to be playing her, and to be a part of this inspiring project."

To celebrate Evans' 90th birthday in 2015, the St. James School produced a video that highlights her career and features interviews with Evans and other significant figures in her life.