Queen Elizabeth II presented the U.S. with a replica Liberty Bell while visiting Philly in 1976

The Bicentennial Bell hung in tower in Old City for decades. For the last 10 years, it has been in storage awaiting a new home 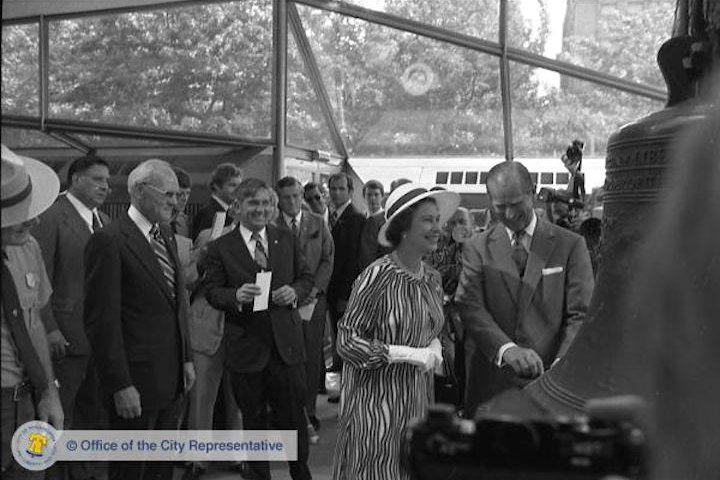 Queen Elizabeth visited Philadelphia on July 6, 1976 as part of the United States' bicentennial celebration. She is pictured above with her husband Prince Philip at the Liberty Bell. For the country's 200th anniversary, Great Britain presented the U.S. with a full-sized replica of the Liberty Bell, known as the Bicentennial Bell.

Queen Elizabeth II, who died at age 96 on Thursday, once visited Philadelphia to deliver a symbolic gift to the United States during the county's bicentennial celebration in 1976.

During a July 6, 1976, appearance at Independence National Historical Park, the queen presented the Bicentennial Bell, which was cast at the same London foundry where the Liberty Bell had been made prior to the American Revolution.

The approximately 6-ton bell – 6 feet, 10 inches in diameter at its lip and 5 feet, 6 inches in height – has an inscription that reads, "For the People of the United States of America from the People of Great Britain, 4 July 1976, Let Freedom Ring."

"It is a message in which both our people can join and which I hope will be heard around the world for centuries to come," the queen said, adding that she was grateful to America's Founding Fathers for teaching the British "to respect the right of others to govern themselves in their own way." 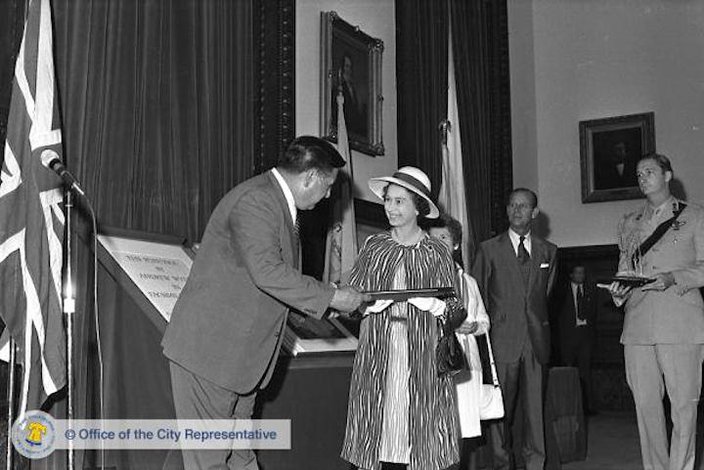 Queen Elizabeth is presented with a gift by Philadelphia Mayor Frank Rizzo during a ceremony at City Hall on July 6, 1976. Prince Philip, Duke of Edinburgh, looks on in the background. 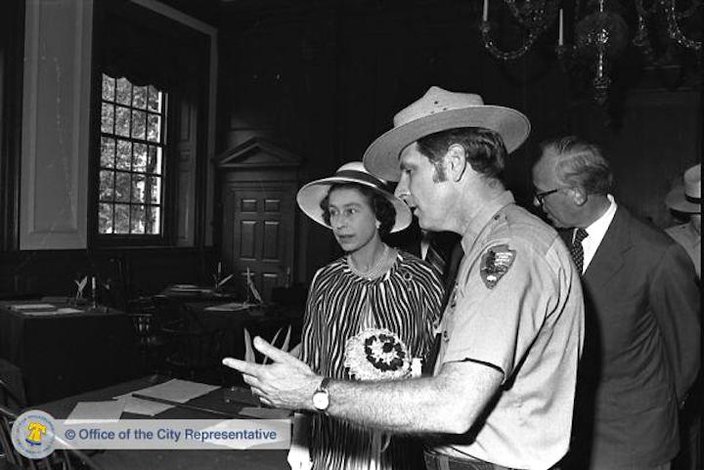 While in Philadelphia for the United States bicentennial celebration in 1976, Queen Elizabeth visited Independence Hall in Old City. She is pictured above speaking with a National Parks Service employee.

The Bicentennial Bell was placed in a tower outside the park's original visitor center, where it remained until its removal in 2013 to make way for the Museum of the American Revolution. The bell has been in storage ever since. But there are plans to showcase it in a revamped garden at Third and Walnut streets.

Elizabeth, who was the longest reigning monarch in Britain, died surrounded by the royal family at Balmoral Castle in Scotland. She had been under medical supervision and was resting at the advice of her doctors. The queen had survived a bout with COVID-19 earlier this year and suffered from other health problems, including mobility issues that increasingly had limited her involvement in affairs at Buckingham Palace.

The queen's death marks a profound generational shift in the British royal family. Elizabeth had been the reigning monarch since her father's passing in 1952, when she was 25. Her death comes after her husband, Prince Philip, Duke of Edinburgh, died last year.

The next in line to succeed Elizabeth II is her eldest son, Prince Charles, who will inherit the sovereign title and become head of the Commonwealth, in addition to inheriting land and other assets. He issued a statement on his mother's death Tuesday afternoon. 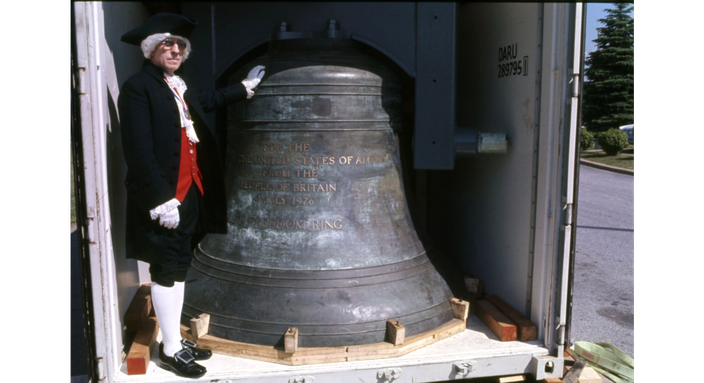 A colonial actor poses with the Bicentennial Bell on June 3, 1976. The bell, still packed in a shipping crate after arriving in Northeast Philly, was a gift from the Great Britain to the United States. 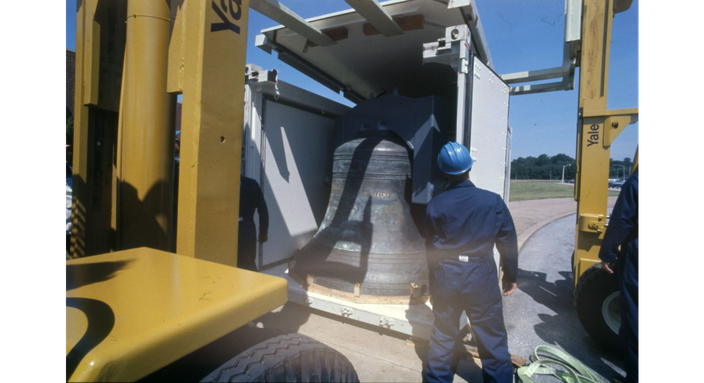 Crews unpack the Bicentennial Bell on June 3, 1976, after it arrived in Philadelphia. For decades, the gift from Great Britain, hung in a bell tower on Third Street between Walnut and Chestnut streets, until it was moved to make way for the Museum of the American Revolution.

A London native, Elizabeth rose to the royal family throne during a period of transition and progress following World War II. She came to be venerated around the world as the leader of a symbolic power structure whose importance lies in tradition and the stewardship of social values. Once thought of as a fairytale queen, Elizabeth helped usher the monarchy into modernity during her 70-year reign, embracing reforms and adapting to the public scrutiny that envelops royal life.

In February 2020, as the world was entering the COVID-19 pandemic, the Independence Historical Trust and Independence National Historical Park announced progress on a plan to create a Bicentennial Bell Garden in Old City to house the bell from Elizabeth.

The plan is to rehabilitate the existing garden, known as the Benjamin Rush Garden or Boxwood Garden, and build a historical attraction that commemorates the relationship between the U.S. and Britain. Once fierce adversaries, the two nations grew to become historical partners and allies. 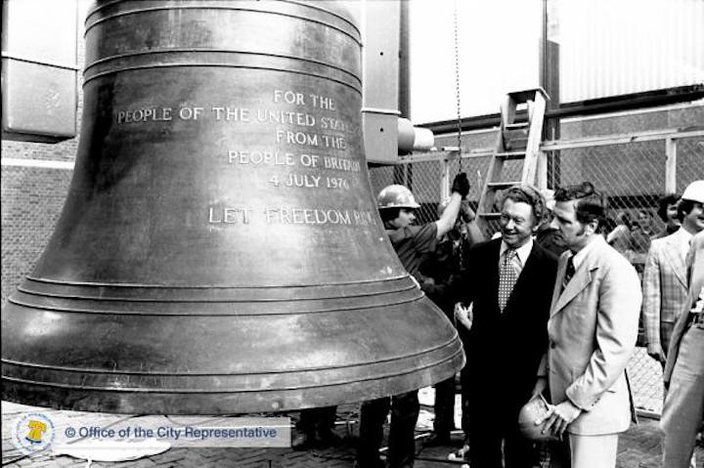 The Bicentennial Bell is pictured here in Old City before being installed in a bell tower on June 15, 1976. The bell remained in the tower for decade, ringing twice a day for much of that time. Since 2013 the bell has been in storage as plans continue to find it a permanent home on display in Philadelphia.

The project received $1 million in support from the Landenberg Family Foundation, with a goal to complete the garden in time for the nation's 250th birthday celebration in Philadelphia in 2026.

The bell's planned return to public view will serve as a marker of the queen's efforts to forge a deeper bond between the two nations. During her address in Philadelphia in 1976, she remarked that Britain should view the Fourth of July as a day of celebration for what emerged from the Revolutionary War.

"Ultimately peace brought a renewal of friendship which has continued and grown over the years and has played a vital part in world affairs," Elizabeth said. "Together we have fought in two world wars in the defense of our common heritage of freedom. Together we have striven to keep the peace so dearly won. Together, as friends and allies, we can face the uncertainties of the future, and this is something for which we in Britain can also celebrate the Fourth of July."