Richard Michetti, 29, was turned in by his girlfriend after he called her a 'moron' for not believing former President Trump's claims of voter fraud 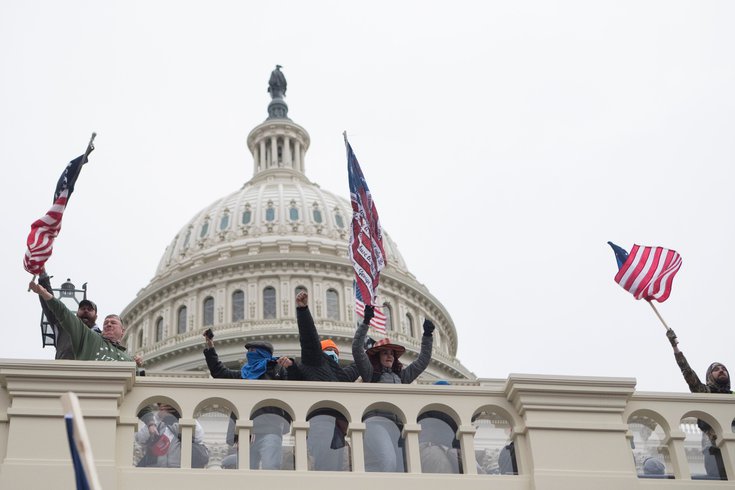 Richard Michetti, 29, was sentenced to nine months in federal prison for his role in the Jan. 6, 2021 insurrection at the U.S. Capitol. He plead guilty to obstruction of an official proceeding in June and also is facing two years of supervised release.

A man from Delaware County has been sentenced to nine months in prison for his role in the attempted U.S. Capitol siege on Jan. 6, 2021, federal prosecutors said Tuesday.

Richard Michetti, 29, of Ridley Park, was turned in to the FBI on Jan. 7 by his girlfriend after he called her a "moron" for not believing former President Donald Trump's false claims of voter fraud.

Michetti is also facing two years of supervised release and is required to pay $2,000 in restitution as part of his sentencing.

On Jan. 5, Michetti traveled to Washington, D.C. to attend the "Stop the Steal" rally and listen to a speech by Trump while both houses of Congress were meeting to certify the 2020 presidential election. The first rioters stormed into the Capitol building around 2 p.m. and Michetti texted his girlfriend that "it's going down here(,) we stormed the building(,) they held us back with spray and teargas and paintballs," according to court documents.

Michetti entered the building at 2:35 p.m. and took several videos of the Capitol Rotunda, sending many of them to his girlfriend. While in the building, he yelled at Capitol police while they were guarding the Senate Chamber, saying that "we feed your family."

He gesticulated at the officers and eventually got around the group to a stairwell beside the Senate Chambers. He was quickly escorted away and the crowd dispersed back into the Rotunda, where Michetti yelled at officers that "you are starting a civil war."

Federal prosecutors initially recommended that Michetti be sentenced to 18 months in prison,  saying it reflects the "gravity" of his misconduct, but also supports his early apology to the court.

At his sentencing on Tuesday, Michetti once again apologized to U.S. District Judge Christopher R. Cooper, noting his sympathy for those who were afraid of what happened at the Capitol that day, the Inquirer reported.

In addition to Michetti's sentencing on Tuesday, Philadelphia resident Michael Dickinson pleaded guilty in federal court to assaulting Capitol police by dumping a bucket of unknown liquid onto them while rioters were storming the Capitol.

Dickinson was first identified in an open-source clip of footage from the riot that was posted to Twitter, according to court documents. Dickinson was later seen injured and was taken to a hospital for treatment. He is set to be sentenced in February 2023 and could face up to 8 years in prison.

In August, Virginia resident Anthony LaMotta was criminally charged in connection with Jan. 6 after he was seen on surveillance footage. Just after election day in 2020, LaMotta and Veterans for Trump co-founder Joshua Macias were arrested and charged with election interference after they allegedly drove to the Pennsylvania Convention Center in a grey Hummer filled with guns and ammunition.

The men were released on bail shortly after their arrest and both were present at the U.S. Capitol on Jan. 6. Macias has not been charged in connection with the riot.

The FBI has arrested more than 850 people in connection with the Jan. 6 Capitol riot. Lancaster Online reported that nearly 70 Pennsylvania residents have been charged, with many still in or awaiting trial.