Surveillance footage allegedly shows Anthony LaMotta inside the U.S. Capitol two months after he purportedly sought to disrupt the vote-counting process in Philly 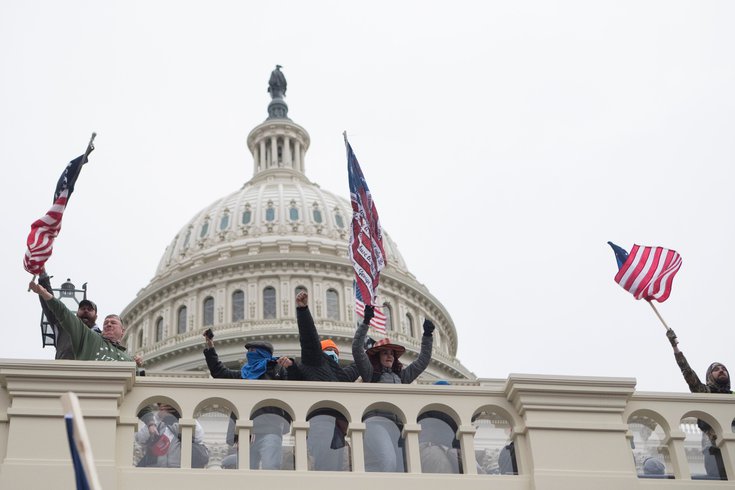 Anthony LaMotta, one of two men arrested in Philadelphia for allegedly driving a weapons-filled Hummer to the Pennsylvania Convention Center, where votes were being counted during the 2020 presidential election, has been charged with four misdemeanors tied to the Jan. 6, 2021 riot at the U.S. Capitol.

A QAnon conspiracy follower who was arrested in Philadelphia after he allegedly drove a weapons-filled Hummer to the Pennsylvania Convention Center, where votes were being counted during the 2020 presidential election, is now facing criminal charges tied to the U.S. Capitol insurrection.

Anthony LaMotta, 63, forcibly entered the U.S. Capitol on Jan. 6, 2021 while a joint session of Congress was being held to certify Joe Biden as the election's winner, according to an affidavit filed by the FBI. He was arrested Tuesday in Chesapeake, Virginia and charged with four misdemeanors for his alleged actions.

Video surveillance shows LaMotta among a group of rioters that pushed past police before rushing into the Capitol Rotunda, the affidavit says. He allegedly was in the building for less than 10 minutes before police pushed him and dozens of other rioters back outside.

The affidavit said the surveillance footage and LaMotta's social media posts provide probable cause for his arrest.

LaMotta has described himself online as a former Army illustrator, bodyguard and a member of Veterans for Trump. In 2020, a webpage promoting his private security services included rambles about "brainwashing Democrats" and "brainless Antifa jerks."

LaMotta — along with Veterans for Trump co-founder Joshua Macias — are awaiting trial on illegal gun possession and election interference charges stemming from their arrests in Philly after the presidential election.

Police allegedly found an AR-15 and more than 160 rounds of ammunition in their silver Hummer, which was adorned with QAnon decals. Neither man had a valid Pennsylvania gun license at the time.

Philadelphia District Attorney Larry Krasner has described the incident as a potential mass shooting situation, and his office previously asked the judge in Macias' case to revoke his bail.

LaMotta and Macias were released following their arrests in Center City – about two months prior to the Capitol insurrection. Though LaMotta allegedly made his way inside the Capitol, Macias could be heard on a bullhorn outside, comparing former Vice President Mike Pence to Benedict Arnold.

On the night before the Capitol riot, Macias met with leaders of the Proud Boys and Oath Keepers in an undisclosed parking garage, according to a video released by U.S. prosecutors and defense attorneys for longtime Proud Boys leader Henry "Enrique" Tarrio.

Tarrio and Oath Keepers leader Steward Rhodes each have been charged with seditious conspiracy for their alleged roles in the Capitol insurrection.

Macias has not been charged in relation to the Jan. 6 riot. In June, Krasner's office sought to have him sent to prison while he awaits trial due to his presence outside the U.S. Capitol and his use of social media. The judged determined Macias had "clearly violated" some of his bail conditions, but declined to have him jailed. Instead, she warned him to stay off social media.

Days earlier, Krasner and state Rep. Malcolm Kenyatta had addressed the importance of prosecuting people who were involved in the Capitol riot.

"As the entire world is watching the Jan. 6 hearings, I think we're all reminded of how close we came to losing this experiment in democracy," Kenyatta said. "In standing outside of this building (the Convention Center) where democracy was very much in action, as the votes were being counted, we had a dangerous individual who — thank god — was intercepted."

The FBI reportedly has the names of hundreds of people who participated in the U.S. Capitol insurrection, aided by civilians who have identified people seen in footage of the riot. But there are not enough U.S. attorneys to prosecute the cases, which must be brought to trial in Washington. The Justice Department has sought more funding to prosecute the cases.