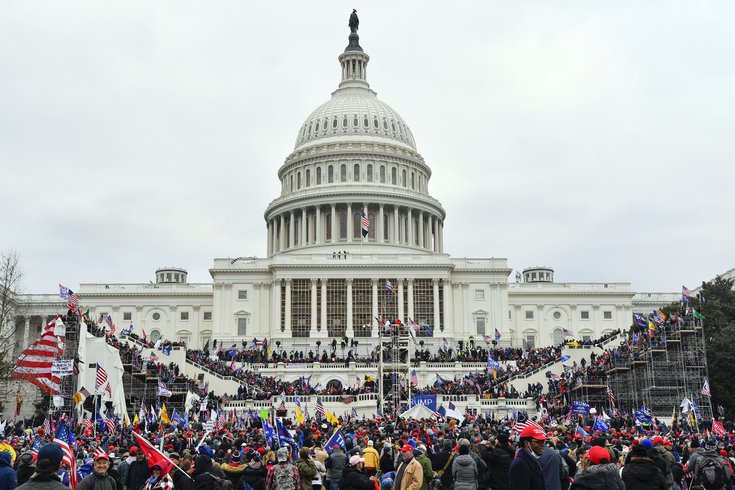 Joshua Macias, co-founder of Veterans for Trump, could be facing additional jail time after video footage surfaced of him meeting with leaders of the Proud Boys and Oath Keepers, District Attorney Larry Krasner said on Monday.

A meeting between Veterans for Trump co-founder Joshua Macias and leaders from the Proud Boys and Oath Keepers could result in jail time for the 43-year-old Navy veteran, District Attorney Larry Krasner said on Monday.

Macias is currently awaiting trial over illegal gun possession and election interference charges in the 2020 election. He was first arrested with Antonio Lamotta on Nov. 5, 2020, after Norfolk, Va. police alerted authorities in Philadelphia that two men were headed to the Pennsylvania Convention Center in a silver hummer armed with guns and ammunition.

Police found the men and the car — which featured QAnon stickers on the back window — later that night. In addition to both of the men being armed with handguns, there was also an AR-15 in the backseat of the car with more than 100 rounds of ammunition. While Lamotta did not have a license to carry the gun he was armed with, Macias had a concealed carry permit from Virginia, which is not recognized in Pennsylvania.

The video of the meeting was first reported by The Washington Post and features Macias in an undisclosed parking garage with Proud Boys leader Enrique Tarrio and Oath Keepers leader Stewart Rhodes. Tarrio and Rhodes have since been charged with seditious conspiracy for their alleged roles in the U.S. Capitol siege.

Both right-wing extremist groups were described by Krasner as "the tip of the sphere" of the insurrection. The footage was discovered as part of a documentary directed by Nicholas Quested that was being filmed in the months leading up to the Jan. 6 insurrection.

"When we first encountered these two defendants (Macias and Lamotta) we knew it was serious," said Krasner. "But we thought they were medium-sized fish. We thought they weren't sharks. Stewart's a shark. Enrique Tarrio is a shark. And who are they meeting with in this underground parking lot, who were they choosing to meet with face-to-face so there's no electronic communications that can be tracked? Why are we meeting underground? There were only four or five people in this meeting, and now that meeting is being lifted up to show that there was specific collusion between the Proud Boys and the Oath Keepers in advance. And who was there with them?"

Macias and Lamotta attended the "Stop the Steal" rally in Washington, D.C. on Jan. 6, 2021. Macias spoke outside of the U.S. Capitol during the riot, comparing former vice president Mike Pence to Benedict Arnold, while Lamotta actually entered the Capitol building, Krasner said.

Though Macias has not been accused of anything directly related to the insurrection, Krasner believes that his involvement in the meeting shows that investigators need to "radically reconsider" whether Macias was as serious about the Jan. 6 Capitol riots as the extremist leaders in the meeting.

The District Attorney's Office previously asked the judge in Macias' case to revoke his bail, which was set at $850,000 earlier this year. During a previous press conference announcing those actions by the DAO, Krasner said that Macias has shown his "disregard for criminal law and for the sacred principles undergirding our democracy."

"As the entire world and country is watching the Jan. 6 hearings, I think we're all reminded of how close we came to losing this experiment in democracy," said Rep. Malcolm Kenyatta. "In standing outside of this building (the Convention Center) where democracy was very much in action, as the votes were being counted, we had a dangerous individual who — thank god — was intercepted."

He said that many officials who were working on securing the election in the months leading up to the insurrection faced attacks and death threats. Most notably, former City Commissioner Al Schmidt received death threats against him and his entire family after Trump tweeted at him over his handling of the election. Schmidt testified to the Jan. 6 select committee on Monday morning during its ongoing public hearings, detailing the threats he received.

Macias has a contempt hearing coming up at the end of the week regarding violations over the conditions of his bail. Krasner said that given the surfacing of this video, Macias should be "locked up" while he awaits trial.