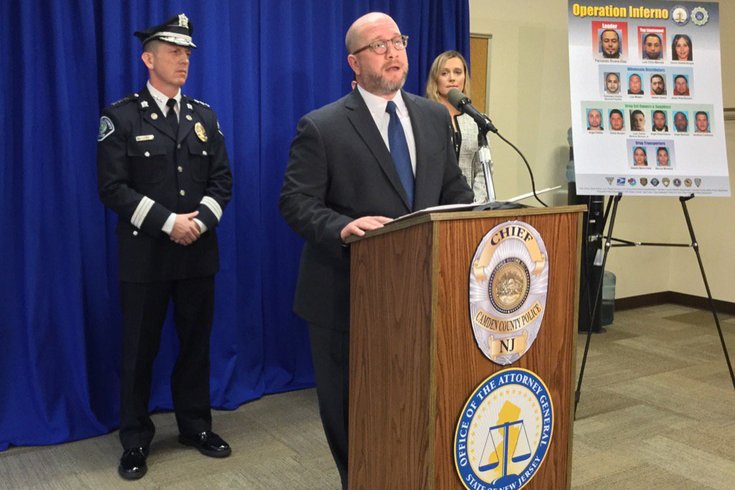 A violent drug network that is allegedly one of the biggest suppliers of heroin and cocaine in South Jersey and Philadelphia has been disrupted after several high-ranking dealers were arrested this week, according to state authorities.

New Jersey Attorney General Christopher S. Porrino announced Thursday that 15 members of the group, including its leader Fernando Diaz-Rivera, were charged as the result of a seven-month investigation, dubbed "Operation Inferno."

Law enforcement officials also seized more than six kilograms of heroin and nearly nine kilograms of cocaine in the bust. Those drugs are worth $600,000 wholesale and approximately $2 million on the street.

“By dismantling his network, we will starve many of those dealers of a reliable source of high-quality heroin and cocaine, making the city safer and reducing the flow of these pernicious drugs into South Jersey and North Philadelphia,” Porrino said.

Diaz-Rivera, 33, of Salem City, was charged with leading a narcotics trafficking network, racketeering, narcotics possession, distribution of narcotics and conspiracy. His ring distributed as much as 20 to 30 kilos of drugs per month to Camden and North Philadelphia.

Authorities said Diaz-Rivera ran the operation from Puerto Rico in recent months by giving orders to Luis Ortiz-Merced, 33, of Philadelphia. Ortiz-Merced was already in custody in Pennsylvania on a prior drug charge.

“We named this investigation Operation Inferno because Diaz-Rivera for years allegedly has been one of the hottest suppliers of heroin and cocaine in Camden and North Philadelphia,” said Elie Honig, director of the Division of Criminal Justice. “With these arrests and charges, we have put out the fire.”