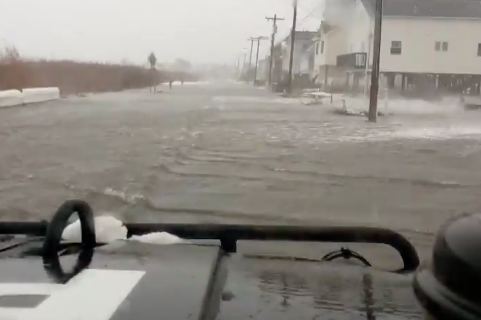 Humvee sloshes through water at Bayfront in Barnegat, Ocean County.

As a forceful winter storm continues to batter the Delaware Valley, officials in Barnegat Township declared a local emergency and issued a mandatory evacuation notice for residents between the Barnegat Municipal Bathing Beach and the East Bay Avenue Bridge.

Despite a potential 4-foot storm surge in Barnegat – nearly as powerful as the 4.5-foot surge during Hurricane Sandy – one local resident brazenly decided to stick around for the show, according to NJ.com.

Keith Sprinzen said he held his ground for Hurricane Sandy and there was no way he was going to leave for the winter storm.

"It's our house, I'm not leaving now," Sprinzen said "It's amazing to see this; who would want to miss this?"

Sprinzen was one of more than 100,000 people who lost power in New Jersey. Ocean County, whose streets were littered with downed power lines in some areas, has borne the brunt of the damage. Scenes from Barnegat on Saturday demonstrated clearly why officials from the Office of Emergency Management and the Barnegat Police Department decided to issue the evacuation.

This would be why a mandatory evac was ordered. Bayfront. Humvee. Still 2 hrs until high tide. pic.twitter.com/u50MnHdwn4

Those without power in Ocean County have been advised to shelter at warming centers set up in the southern part of the county. Barnegat residents can head to the Brackman School, while Stafford Township residents can take refuge at the Town Hall at 260 East Bay Avenue.

Sprinzen said he was among several Barnegat residents who received evacuation notices but chose to stay put. If he survived Hurricane Sandy, he figures he can brave the snow.