Marc Schwartz, the voice of the Somerset Patriots, was suddenly an infielder 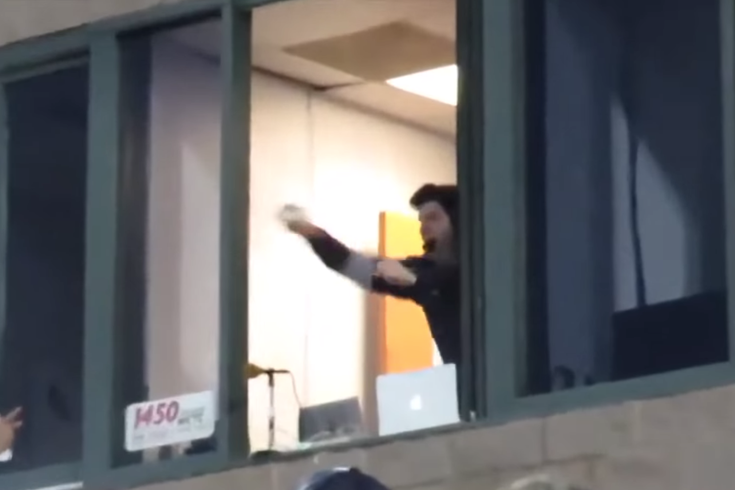 Marc Schwartz caught a foul ball in the middle of announcing a Somerset Patriots baseball game.

When it comes to sporting events, announcers and reporters usually try to avoid inserting themselves into the action. But an announcer found himself front and center Thursday evening at a New Jersey minor league baseball game, and the fans loved it.

Marc Schwartz handles play-by-play duties for the Somerset Patriots, an Atlantic League team from Bridgewater, New Jersey. The Patriots – an unaffiliated minor league team whose roster includes one-time Phillie Jimmy Paredes – were trailing the High Point Rockers, 3-1, in the top of the seventh inning Thursday when Schwartz was suddenly participating in the game, along with announcing it:

boy am I impressive... 😎 pic.twitter.com/KaaOWPI84V

I’ve got to hand it to Schwartz, that’s some pretty sweet composure. No huge exclamation, or any kind of incoherent sounds that would confuse the listeners at home. He manages to narrate exactly what’s happening in real time, give himself a few compliments, and also remind listeners what the count is:

“Cardullo fouls it off, toward the broadcast booth … and I make the catch on the foul ball! I am very proud of myself I hope somebody got video of that, as I caught it on the fly. And it’s a 1-2 count. Boy am I impressive. What a play by me.”

It's hard to blame Schwartz for patting himself on the back. That was sick.

Schwartz’s catch was captured on video by Mike Ashmore, a reporter for The Trentonian who’s been covering the Patriots for more than a decade.

Unsurprisingly, the video quickly went viral, and was shared by ESPN, Major League Baseball, and basically everyone else:

Hopefully Schwartz enjoys his day in the spotlight. The Patriots lost, 5-2.