Baseball stadium food: What to eat this year at three area ballparks 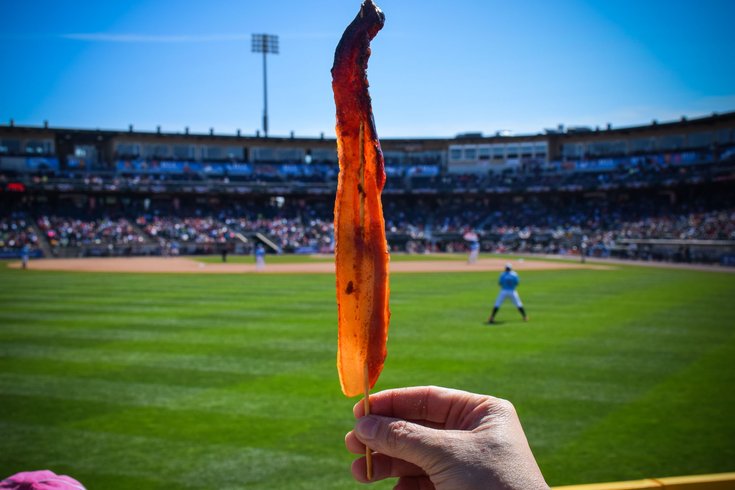 New this year at Coca-Cola Park: maple-candied bacon on a stick.

There’s nothing wrong with classics like hot dogs, peanuts and Cracker Jacks, but local baseball concession stands today offer so much more. Whether you’re looking to splurge on an over-the-top novelty item (hello, nine-patty cheeseburger) or perhaps stick to your vegan, gluten-free diet, they’ve got you covered. Here's a guide to some of the best eats for the 2015 season.

The Phillies may be in for a rough year, but at least their fans have a dizzying array of options for eating their sorrows away.
Some of the perennial best bets here are Tony Luke’s roast pork, the Schmitter sandwich from McNally’s Tavern, Federal Donuts’ fried chicken and donuts, grilled kielbasa from Bull’s Barbeque, Campo’s cheesesteak, and Chickie’s and Pete’s crab fries.

A chocolate scoop with sprinkles from the new Turkey Hill Creamery in Citizen Bank Park's Ashburn Alley. Photo by Wendy Ramunno.
New this year in Ashburn Alley is Turkey Hill Creamery, with hand-dipped and soft-serve ice cream, milkshakes and floats. The Wayback Burgers chain (now in sections 120, 135 and the left-field plaza), brought its “Triple Triple” ($30), an absurd tower of nine patties, nine slices of cheese, lettuce and tomato on a bun. Who orders this 2,200-calorie heart-stopper? “College students,” says Aramark GM Kevin Tedesco. 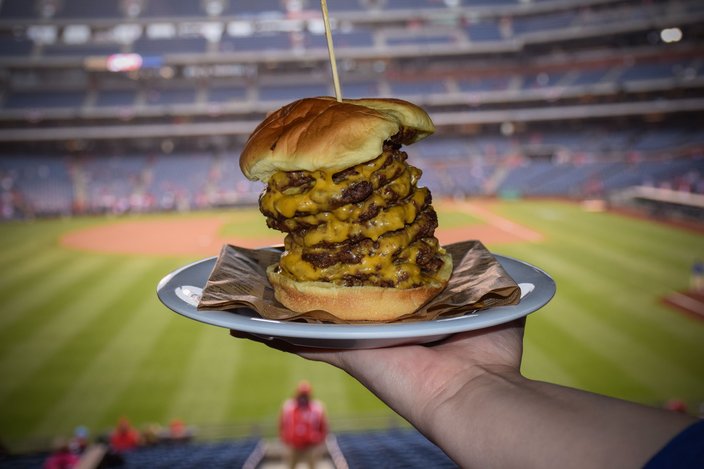 Wayback Burger's out-of-control "Triple Triple" cheeseburger at Citizen's Bank Park. Photo by Wendy Ramunno.
Section 134 will continue to host a rotating selection of souped-up hot dogs, with a few new additions. The “Carnegie Dog,” topped with pastrami, Swiss cheese and Thousand Island dressing, is worth seeking out.
But it’s not all burgers and dogs. For years, CBP has ranked among the top vegetarian-friendly stadiums nationwide. The vegan “Society Hill Mushroom Steak” at Harry the K’s (the sit-down bar and grill at section 243) features sautéed wild mushrooms, dairy-free cheese, caramelized onions and crispy tofu croutons (tip: substitute provolone or another cheese for a vegetarian version). Gluten-free rolls are available here and at the dedicated gluten-free stand at section 126. 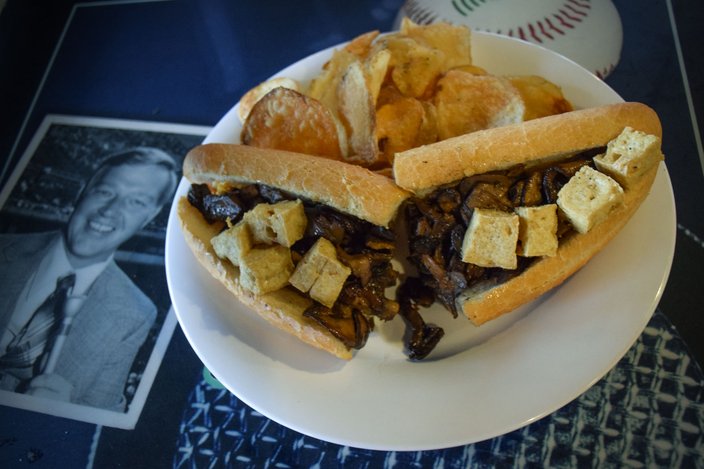 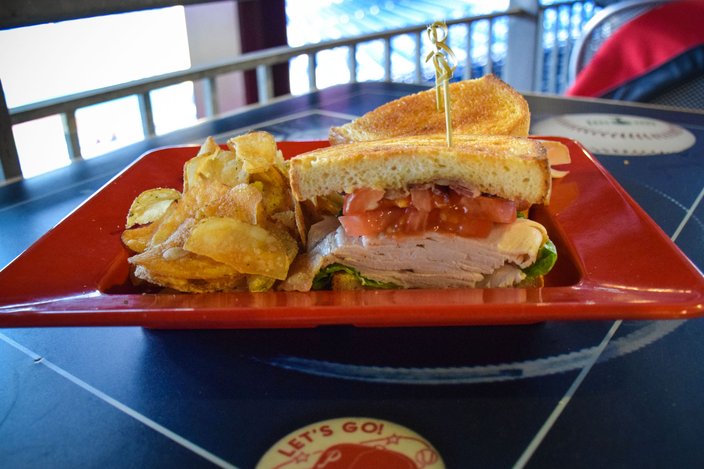 Harry the K's new Rittenhouse Square Smoked Turkey Club at Citizen's Bank Park. Photo by Wendy Ramunno.
Under executive sous chef Anthony Campagna, the Aramark staff at CPB takes pride in going beyond typical mass-produced food — making their own sausages, and curing and smoking meats in-house, for example.
And when Aramark partners with popular local brands like Federal Donuts, they work to replicate their beloved products as much as possible (yes, they have a FedNuts’ “Donut Robot” at the stadium).
If you prefer drowning your Phillies-related sorrows, the new team-branded red wine from Chaddsford Winery is now sold in the concession areas that sell cocktails.

At the home of the Lehigh Valley IronPigs, the Phillies Triple-A affiliate, bacon rules.
Not only does it dominate the concession stand menus, but the wavy strips appear on players’ uniforms and team merchandise, and even on the grass behind home plate — physicians’ groups be dammed. 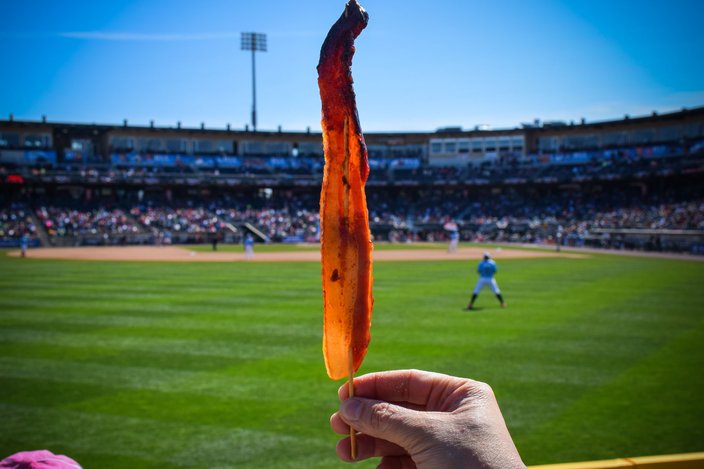 New this year at Coca-Cola park: maple-candied bacon on a stick. Photo by Wendy Ramunno.
Among the new offerings this season is a fun maple-candied bacon on a stick, perfect for snacking on with a beer in the other hand. Other items veer toward the extreme: A two-foot-long hot dog is smothered with chili, bacon, beer cheese sauce and fried onions. Mashed potatoes, pulled pork, cheese sauce and green onions are all loaded into one cup for a “pork parfait.”
In non-porcine offerings, fan favorite Aw-Shucks serves up addictive ears of sweet corn slathered in butter and topped with Parmesan and a Southwestern spice blend. The IronPigs’ take on the “walking taco” is local brand Martin’s nacho cheese chips tossed with ground beef, lettuce, tomato and cheese — eat it directly out of the bag with a fork.

Aw-Shucks corn on the cob is slathered in butter and topped with Parmesan and a Southwestern spice blend at Coca-Cola Park. Photo by Wendy Ramunno.
The Jaindl Pennsylvania Dutch–style smoke house at section 118 is worth a stop for its pulled turkey sandwiches and smoked turkey legs. (Fun fact: Jaindl Farms, based in Orefield, Pa, sends two Thanksgiving turkeys to the White House each year.) 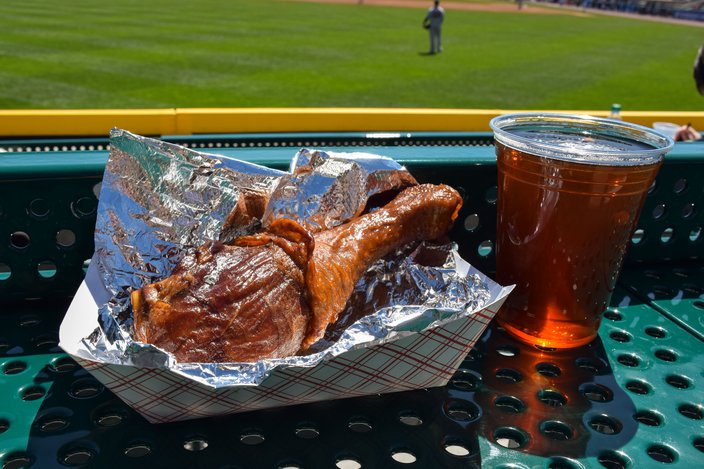 The new "Pig Pen" section next to the bullpen at Coca-Cola Park is a great place to enjoy a smoked turkey leg and a Victory HopDevil IPA. Photo by Wendy Ramunno.
For lighter fare and vegetarian alternatives look for salads, wraps and black bean burgers. There’s a dedicated gluten-free cart with baked potatoes and other healthy offerings at section 107.
What’s for dessert? Chocolate-covered bacon, of course.

The home of the Lakewood BlueClaws, a Class-A Phillies affiliate, is worth a visit for its reasonable prices and laid-back vibe.
You won’t find many outrageous menu options here, but all of the bases are covered. Concession stands sell the usual burgers, sausages, nachos, and Chickie’s and Pete’s crab fries.
At the Dog House stand, choose from a number of loaded hot dogs, such as Chicago-style or mac-and-cheese. There’s a craft brew house down the right field line. 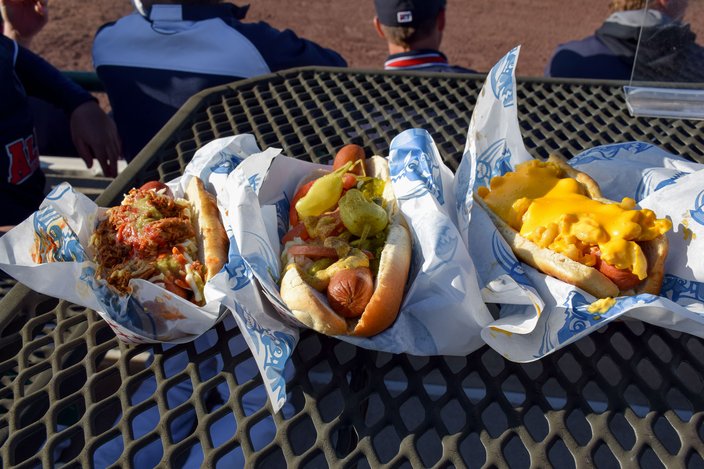 Loaded hot dogs from the Dog House stand at FirstEnergy Park. Photo by Wendy Ramunno.
The Horizon Healthy Plate menu at the third-base concession stand features heart-healthy items like turkey burgers, grilled chicken and salads. At the other end of the spectrum, fans can choose from among deep-fried Oreos, deep-fried cinnamon rolls or deep-fried cookie dough.

Cookie dough is one of several deep-fried dessert options at FirstEnergy Park. Photo by Wendy Ramunno.
There’s plenty of lawn space for spreading out on a blanket. Along the right field line, several rows of tables go all the way down to the bullpen area—just inches away from the players.
Perhaps the biggest incentive to head to FirstEnergy Park is the promotions that run throughout the season, like $1 tickets during opening weekend. Other “simply clawsome” deals are the Kids Eat Free special during Sunday and Monday games, all-you-can-eat ticket packages, and the Thirsty Thursday Club (just $56 covers admission to seven games and discounts at the WRAT Trap bar behind center field).