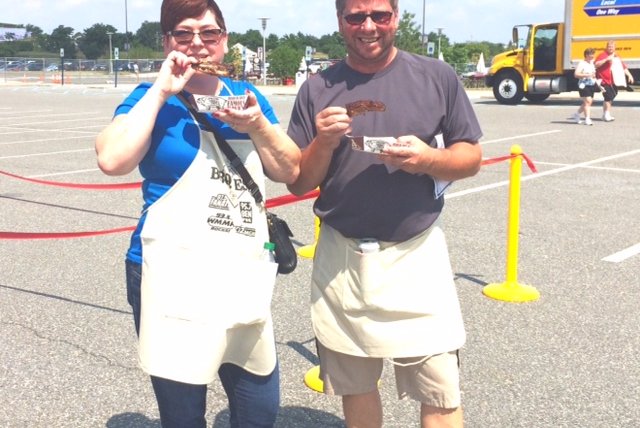 Rick and Sandy Risko planned to scope out the entire festival, but the made a pit stop -- that's a barbecue pun -- for the ribs at Famous Dave's.

Rick and Sandy Risko's plan for hitting up Philly’s BBQ Fest was to tour the parking lots of Citizens Bank Park, look over the many samples, make a mental list, come back and eat.

Their plan went out the window when they hit their first vendor.

In this case, the Glassboro couple’s spontaneity paid off when their first pit stop was at Famous Dave’s.

One look and they had to stop.

While Rick Risko nodded, grinned, smiled and gnawed, Sandy spoke for them.

“These are delicious! Awesome!” she said.

Dave Marks, standing nearby, smiled and whipped away the sweat that comes with tending hundreds of pounds of smoking meat while standing on a macadam parking lot on the hot penultimate day of July in sultry Philadelphia. 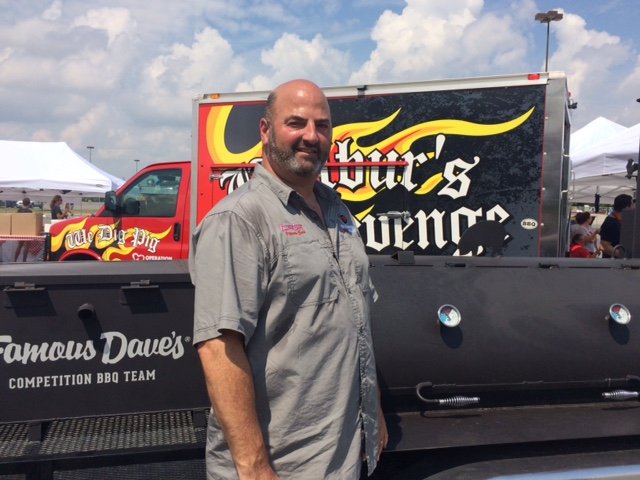 David Marks, who owns the Famous Dave's franchise stores in the Delaware Valley, is a hands on pit mater who sweats up a storm. He'll be on an episode of "Smoked" Wednesday night on the Destination America network.

Marks, you see, is the pitmaster at Dave’s, the man who makes sure the cuts of meat are just right, seasoned right, smoked right.

And while he’s not that Famous Dave, in the Delaware Valley he may as well be.

On Wednesday night, he’ll be on the Destination America show “Smoked,” with the real Dave, Dave Anderson, a Native American who once ran the Bureau of Indian Affairs.

Marks loves competing, trading tales with customers, posing for selfies, as well as donating his talents: he recently fed 1,000 cops.

The festival, in its first year, offered tickets at $50 and $75 per person, providing different levels of tasting samples, an hour early jump on entry for the premium price. Parking was abundant and free, the festival well-organized, vendors prepared, and lines manageable.

Steve Fahey of Passanante’s in Bristol, Bucks County, a 100-year-old institution, was trying out a new product, a slider made from several beef cuts as well as pork sauced with a sweet and mustardy prepared sauce made by French’s.

Alas, only one vendor, Tim Smith, was serving up the thinner savory sauce favored in central North Carolina, a part tomato, part vinegar and pepper sauce with a piquant tang, and a cleaner flavor profile.

Smith said he’d tried the straight vinegar and pepper sauce favored in coastal Carolina and found it a slow seller, so this was his compromise.

Customer Bert Bennett, who is deaf, signaled his satisfaction for Smith’s version of pulled pork with a thumbs up.