Behind Bartolo Colon's arm (and bat), Mets beat up on Phils 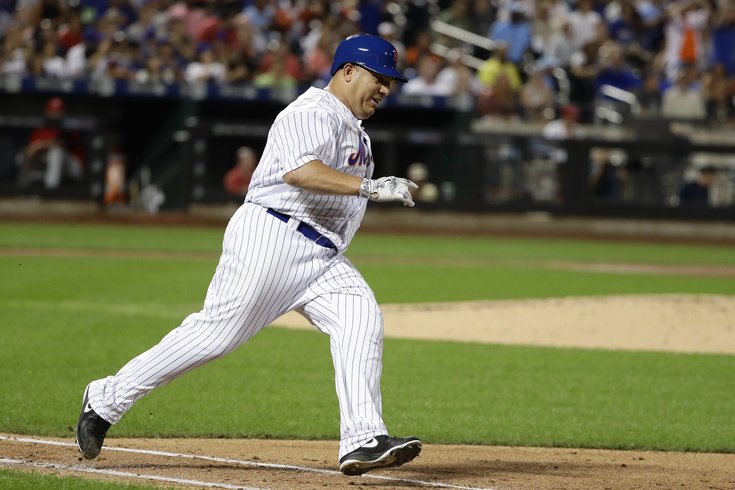 Bartolo Colon hit a double against the Phillies on Friday night. And no, that's not a typo.

NEW YORK – The 43-year-old pitcher with the .088 career batting average had just as many hits as the Phillies entering the eighth inning. Bartolo Colon, once traded for Cliff Lee, Grady Sizemore, and Brandon Phillips when the trio were prospects, and a current a folk hero in Flushing, collected his fifth career extra-base hit.

The pitcher Colon was sharing the mound with at the start of the game, Adam Morgan, had allowed more runs two batters into his night than he had allowed in six innings a week earlier against the hot-hitting St. Louis Cardinals. Five pitches in, Jose Reyes and Asdrubal Cabrera greeted Morgan with back-to-back home runs.

Despite a valiant effort from the boys in gray in the eighth inning, it was not the Phillies (or Morgan’s) night on Friday at Citi Field.

Colon, the ageless wonder in the Mets fragile rotation, and a hat trick of home runs off Morgan sent the Phillies to a 9-4 defeat. It was their third loss in their last four games, and sixth in their last nine.

“Once again … Colon seems to own us,” manager Pete Mackanin said. “We can’t square the ball up off of him. He does a heck of a job with command and movement. He’s tough. We didn’t score enough runs to stay in the game.”

The Phillies didn’t collect their first hit until the fifth inning.

Colon pitched into the eighth inning. He has a 3.44 ERA after 27 games this season, an ERA lower than every starting pitcher on the Phillies staff.

"I think it helped that he had a lead – he was able to pound the zone," Phils outfielder Peter Bourjos said. "Colon is different than any pitcher you see nowadays. You don’t see guys throwing 88, just fastballs, sinking it. There aren’t many guys left that are sinker ball guys and if they are, they’re throwing 95. So he’s kind of a rare breed. You don’t face guys like that. And he does a good job of locating, changing speeds on his fastball and working quick."

Colon looks like the kind of guy that could be a stabilizing force and innings eater type the Phillies will need in 2017. And maybe a decent nine-hole hitter, too.

Morgan, meanwhile, will go into the season’s final month hoping to increase his chances of having a role in 2017. The 26-year-old left-hander with the 6-something ERA helped himself a week ago with a sharp performance against the Cardinals at Citizens Bank Park.

Morgan is likely to continue to get work down the stretch, as the Phillies are down two pitchers (Aaron Nola, Zach Eflin) wth another (Vince Velasquez) likely to be shut down at some point in September. But if he continues to look as he did on Friday, and during the majority of his start earlier this season in May and June, those starts are no guarantee and 2017 would almost certainly be another year ticketed for Triple-A Lehigh Valley or another organization.

"He just wasn’t the same guy," Mackanin said of Morgan on Friday compared to a week earlier against St. Louis. "It’s just a matter of consistency and being able to repeat and doing it over and over again. Once in a while isn’t getting it done. He’s got to be more consistent."

Morgan has had back-to-back quality starts just once this season, in early June.

Reyes, back in New York after stops in Miami, Toronto, Colorado, and a suspension for a domestic violence suspensions, too, homered on the fourth pitch Morgan threw on Friday. The next pitch left the playing field, too, as Cabrera sent his 14th home run of the season into the visiting bullpen, perhaps as a nudge to the Phillies relievers that they had better get their arms loose.

Morgan finished the inning with flair, collecting back-to-back strikeouts, punched out three more in a harmless second, and then escaped a vicious line drive back at him from Yoenis Cespedes and then a jam when Maikel Franco turned an inning-ending double play in the third. But in the fourth, Morgan wasn’t as fortunate.

Colon, who entered 2016 with two extra-base hits in his first 19 big league seasons, led off with a double. Reyes followed with a double. Later in the inning, Neil Walker worked a nine-pitch walk.

And then Wilmer Flores hit a grand slam and there wasn’t a whole lot else to be said on Friday night in Flushing.