A séance with Ben Franklin 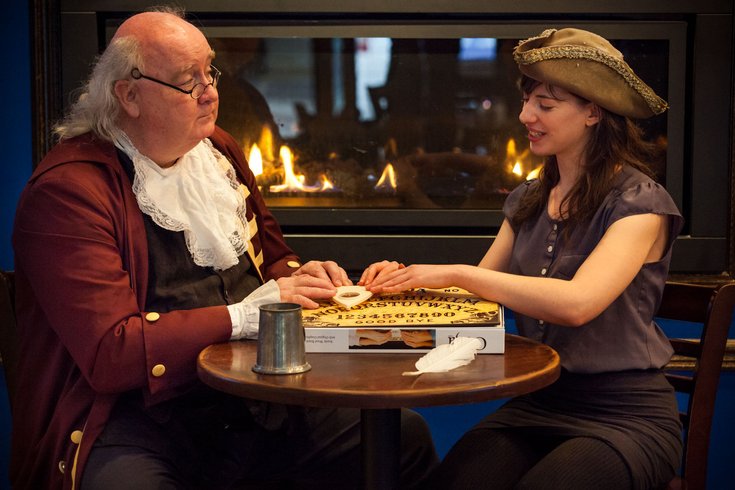 You’re milling about Center City, aimlessly killing time before happy hour begins, as you do, when – who’s that you see? That long white hair, those tiny bifocals – you can’t help but think… My god, it’s Benjamin Franklin.

A man known for his Socrates-level wisdom could shine new light on the gossip of yore, and maybe even predict the future of his adopted city, Philadelphia. What could he tell us about the world we’re living in today?

Break out the Ouija board: We had the supernaturally lucky chance to find out.

Channelling the spirit of old Benny F, impersonator J. Ward Larkin exclusively revealed to PhillyVoice.com what the real Betsy Ross was like, how hard it is to use a quill, and who’s going to take the cake as next mayor of Philadelphia.

How do the forefathers compare to modern politicians? Say, you and Bill Clinton.

If you’ve ever met Bill Clinton - if you shook his hand, you were gonna vote for him. He had that ability to do that. He was charming. He is charming.

I would compare Thomas Jefferson to Paul McCartney. He was kind of cute. The women loved him. A little bit of the red hair. I would compare John Adams to Richard Nixon, which the younger generation doesn't understand. Very abrasive, but got things done. And I would probably compare George Washington to Dulles, who was the right-hand man to Roosevelt during WWII. They named [Washington] Dulles Airport for him. Or Marshall, who designed the Marshall plan after WWII.

She was a very talented seamstress. Actually, she was an upholsterer. She was not a wallflower because guys found her attractive, and I forget if she was widowed three or four times but, you know, I didn't want to take the chance to be the next one in there.  She had daughters. I wouldn't consider her a diva or a wallflower. But when George Washington and Robert Morris went down and asked her to sew the flag, she was more than willing to.

Who will be the next mayor of Philadelphia?

Well, I have to tell you, I’m really a fan of Lynne Abraham. Because she’s got age and wisdom on her side. And if you look at what I’ve done, most of the things I’ve done were after I was 70. For example, I signed the Declaration of Independence when i was 70; I signed the constitution at 81; I was ambassador to France in my 70s. So I respect the age of the senior candidate. However, I have to admit I’m a big Jim Kenney fan. His name just flows easily, like Ben Franklin. Jim Kenney. Local kid.

Are you cool with women in politics?

I am completely against women suffering - or is it women’s suffrage? I just can’t figure out which one.

What’s easier to use, a feather quill or cell phone?

The feather quill is very difficult to use. The cell phone - U think they’re going to catch on. [The quill] was very difficult. If you look at the writing, it was almost phonetic because you would write and dip, write and dip. If you were writing the word ‘writing,’ for instance, w-r-i-t-i-n - you might not have enough ink for the ‘g.’ So it looks as though it’s almost the phonetic alphabet.

There was a lot of discussion of my wife Deborah not being very intelligent because she wrote in a phonetic way. Her spelling wasn't good but it was really a test of the quill pen.

Is color TV here to stay?

This TV thing, I call it television - I understand it’s here to stay. And that can somehow pull the signal down from the heavens. See people’s faces. Young people can see things you couldn't see in my day. I’d have to go to Michelangelo’s drawings to pick up what they see.

How do you think social media has changed the world?

There’s a story about me playing chess all day with a woman in a bathtub. At that time, the aristocracy would bathe maybe once a month and the plebeians would bathe twice a year. She was in the bath all day long and I was playing chess with her. She was in Versailles, and I went back to Passais and I penned her a note. And I said in the note, ‘I had an enjoyable time this afternoon, but my chess was awful. I had trouble maintaining eye contact.’ And I had the note couriered to her. That’s what I call the first instant message.