Bibles in hotel rooms: Is it time for checkout? 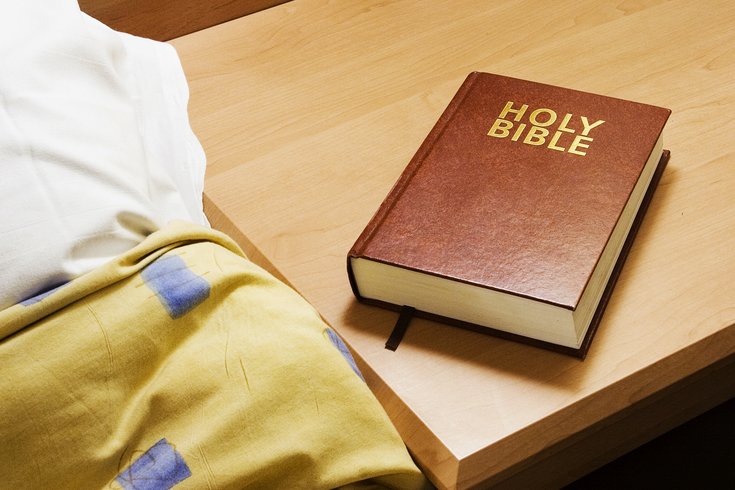 In Pennsylvania about 300,000 Gideons Bibles are distributed to hotels, hospitals and university students each year.

For the nomads of the world, the presence of the Holy Bible in a hotel room nightstand feels about as ubiquitous as a tabloid at the supermarket checkout -- an item we expect to see quietly lingering on the sidelines, whether we want to read it or not.

But with 1.5 million Catholics expected to flood the region for the World Meeting of Families later this year, might it be a problem that many Philly hotels are stocked with those Bibles -- that is, Protestant Bibles?
Apparently so, according to the Greater Philadelphia Hotel Association.

“We're working with the World Meeting of Families to have Bibles on request for the attendees," Ed Grose, executive director of the Greater Philadelphia Hotel Association, told PhillyVoice. "We're going to try to let hotels give guests the option of having a [Catholic] Bible, because a lot of my hoteliers ... removed Bibles because they want to be welcoming to all faiths and didn’t want to limit it to just one -- especially with international visitors. And I think that’s happening across the country, to be more accommodating to all faiths instead of just one.”

However, whether hotels are being accommodating to all faiths isn't clear.

There's no exact record of how many hotels in the Philadelphia region offer Protestant Bibles in their hotel rooms. But what is known is that many of those Bibles are sourced back to a Kentucky-based organization called Gideons International, which takes ownership of the tradition that stems all the way back to 1898 when two traveling Christian businessmen in Wisconsin bonded over the Bible in their hotel room. Gideons, which issues all of its hotel Bibles for free through individual donations, placed its first organizationally backed King James Bible in 1908 and just last week placed its 2 billionth copy worldwide. (Fun fact: A number of those Bibles happen to be manufactured here in Philadelphia by a publisher called National Publishing Co.)
In Pennsylvania, Gideons International told PhillyVoice, about 300,000 Gideons Bibles are distributed to hotels, hospitals and university students each year. About 10 percent of those are distributed to hotels -- both new hotels and established ones that replace their stock every six years. Used Bibles are then shipped off to prisons.
In short, that's a lot of Bibles being dispersed in an industry that's purportedly abandoning the tradition, not enabling it.
Moreover, religion's presence in a neutral space triggers a bigger question: Why, in 2015 -- in Philadelphia, no less -- keep Bibles in hotel rooms at all?

The answer, in truth, is that there is no answer -- or not an easy one, anyway.
Hotel Bibles, according to Gideons, are placed by "camps" of businessmen "and their wives" who facilitate dialogue with hotels and other organizations. The mission of those dusty Bibles in the nightstand is as you'd imagine: to convert and, to some degree, comfort existing Christians.
The local Gideons branch, based in Devon, Chester County, did not respond to PhillyVoice's calls -- nor did Gideons International respond to questions about the relevance and appropriateness of its Bibles' existence in hotels. Calls made to Philly hotels revealed that major-player residences like the Ritz-Carlton, the Four Seasons in Logan Square, the Sheraton Downtown, Loews Philadelphia, Hotel Sofitel and Marriott all have Gideons Bibles in hotel rooms. The Marriott Downtown, the largest hotel in Philadelphia, not only keeps a Gideons Bible tucked away in the nightstand drawers of its rooms but also the Book of Mormon -- likely because the corporate owner himself is Mormon.

Representatives from Hyatt, Hotel Sofitel, Loews and Hilton did not respond to inquiries on their policies in time for this story. Kimpton Hotels, meanwhile, which manages Hotel Monaco and Hotel Palomar, offered a "no comment."

With the exception of the Borgata in Atlantic City, which launched "Bring Your Own Bible" in 2003, the subject of Bibles in hotel rooms is a hot potato no one in hospitality dares touch.

"It’s one of those things that the hotels are complacent with," explained Jeff Lolli, associate professor of hospitality management at Widener University. "They’ve always done it, and continue to do it, and as long as it’s free, it’s not a big deal. Hotels are focusing on the bottom line. But if they have to start paying, then they might make a decision [to take them out].”

Basically, with Gideons doling out Bibles from an endless stockpile, there's little incentive to pull them out of rooms. Because U.S. citizens are predominantly Christian, and because the practice has become status quo, little thought has been given to what the actual value of a Bible in a hotel room is.

“It’s not the hoteliers so much as the Gideons themselves," said Michael Sheridan, professor of tourism and hospitality management at Temple University. "The Gideons supply them for free and make sure they’re visible – they’re around every few years to replenish if you’re missing some or go through renovations; they’re well-connected to the hospitality industry. They’re in-your-face – not in a negative manner, even. But if you say you need 100 Bibles, they’ll give you 200. And I think there’s guilt on behalf of hotels, so they don’t throw them away and they put them in rooms."

"It's just something we're accustomed to," he added. "There's a bed, a TV and a Bible in the nightstand."

While the Archdiocese of Philadelphia is happy to go along with the Greater Philadelphia Hotel Association's initiative to distribute Catholic Bibles, it's steering clear of any concerted effort to have Protestant Bibles swapped out, telling PhillyVoice only that the World Meeting of Families aims "to be inclusive of all people regardless of their faith tradition or lack thereof."
The Council on American-Islamic Relations Philadelphia, meanwhile, said it's not exactly up in arms over Bibles in hotel rooms, though it would like to see a Quran placed next to it.
And then, of course, there's the Philadelphia Coalition of Reason -- Philly's nontheistic organization.

"It has become a bit of a joke that everyone but the Gideons are in on," Staks Rosch, coordinator for the Philadelphia Coalition of Reason, told PhillyVoice. "If someone is really religious and needs a Bible, they probably packed their own. Most people either ignore the Bibles completely or use them as a prop for a joke."

Rosch explained that his organization isn't asking for space in hotel rooms, but that other organizations should have access if Christians are also being given that space. (He jokingly cited an English hotel that replaced its Bibles with copies of "Fifty Shades of Grey.")

"I don't really see why hotels need to put any books in their rooms, but if they open it up to one religion or group, they really should open it up to any group that wants to provide a book," he said. "I bet if the Church of Scientology put Dianetics in hotel rooms, there would be more media outrage."

BDK America, an organization that distributes free copies of "The Teachings of Buddha" to hotels across the country, told PhillyVoice that it faces an uphill battle to get Buddhist literature in hotel rooms. It distributes 20,000 copies of the book per year, but not one to a hotel chain.

"You won't find [a Buddhist book] at the Hyatt, Hilton or, of course, Marriott," said Brian Nagata, director of BDK America. "The primary reason we're always told is that customers may be offended to find the book in the room, so they don’t want to even approach the idea of including it in hotel amenities."

Nagata said that a handful of motels in Philadelphia and outlying regions of Pennsylvania have placed the literature, but none of those are major chains.

David Watt, a professor of religion at Temple University, noted that it's not altogether surprising that hotels have gone so long without seeing a complaint about the seemingly exclusionary policy of religious texts in rooms -- after all, 50 percent of Americans, according to a 2014 Gallup poll, identify as Protestant. He compared the general American attitude to laws in France, explaining that 20 nuns might walk by in Paris with not a single passerby batting an eyelash -- except when one in a Muslim veil strolls by. (Muslim veils are banned in France.)

Watt added that there's also no lack of Philadelphia history between Catholics and the King James version of the Bible, the same one Gideons issues.

"There were riots called the Philadelphia Bible Riots in the 1840s, when Catholic churches were burned to the ground, and the riots were [partly] over whether the King James Bible was going to be taught in Philadelphia’s public schools," he said. "It’s a 150-year-old controversy.”

Bibles: On the way out of hotel rooms?

While it's surely not evident that the bulk of hotels are chucking Bibles in the garbage bin, there does appear to be momentum in that direction.

"My personal belief is that in 10 to 15 years, hotels will get rid of anything that’s related to religion, to not offend any guests -- no religious paraphernalia, whether it’s a Bible or anything else," Lolli said. "“It was there for convenience, to encourage people to read it, but that was many years ago. And with the onset of technology, you can get a Bible on an iPad [in the hotel room] or on your phone. You don’t need the hard print."

Though it wouldn't comment for this story, Kimpton made note that its Philly hotels -- both of which opened in the past six years -- have never offered religious texts in their hotel rooms. The Hyatt at the Bellevue and the DoubleTree Downtown, meanwhile, each said they don't carry Bibles anymore. Rittenhouse Hotel said it keeps them available upon request, a trend Lolli said he's noticed in recent years.

Look, it's one thing to offer Grey Goose over Ketel One in the mini-fridge, and quite another to offer one religious (but especially a third-party-organization-endorsed text) over every other one. And with as many walks of life that pass through Philadelphia, and waning national interest in religion, it's only a matter of time before housekeeping departments everywhere are tasked with emptying the nightstand drawer.

In an increasingly multicultural society, it might be the Bible's time for checkout.

"We have such a huge blending of religions in the U.S. that it’s hard to please everybody," said Lolli. "It might be better to not have anything at all.”