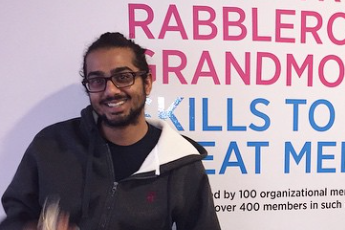 Jay Mohan poses for a picture for his employer's Instagram page.

The bicyclist who died after being struck by a car Saturday night at the intersection of Girard and Ridge Avenues has been identified as Jay Mohan, a 26-year-old filmmaker and Temple University graduate, according to Philly.com.

He worked as the access manager at Philadelphia Community Access Media, which operates the city's public access television network and provides film equipment and classes to residents. Mohan, who lived on the 1300 block of N. 26th Street, was reportedly working on a documentary film project at Philly CAM before his death.

Mohan, whose full first name is Vijay, was born in India, where his mother and sister live.

His girlfriend, Maori Karmael Holmes, told NBC Philadelphia that he would be missed:

"He was just a sweet, kind person. He took care of a lot of people. It’s an incredible loss, especially someone so young."

According to CBS3, the 26-year-old Mohan was heading eastbound across Girard when he was struck by a Buick Roadmaster around midnight.

Mohan reportedly suffered multiple fractures and a serious head injury. He was transported to Hahnemann Hospital, where he was later pronounced dead. Police said the driver of the vehicle stayed at the scene and was taken to the hospital with minor injuries.

This is the second car accident involving a cyclist in North Philadelphia in the past two weeks after 22-year-old Temple graduate Rachel Hall was hit by an 18-year-old driver with a learner's permit. Hall remains on life support at Temple University Hospital. The driver, Rashan Roberts, is charged with death and/or injury with no license and faces a minimum 90-day sentence as a result of the third-degree felony charge.

The latest report does not state whether Mohan wore a helmet.