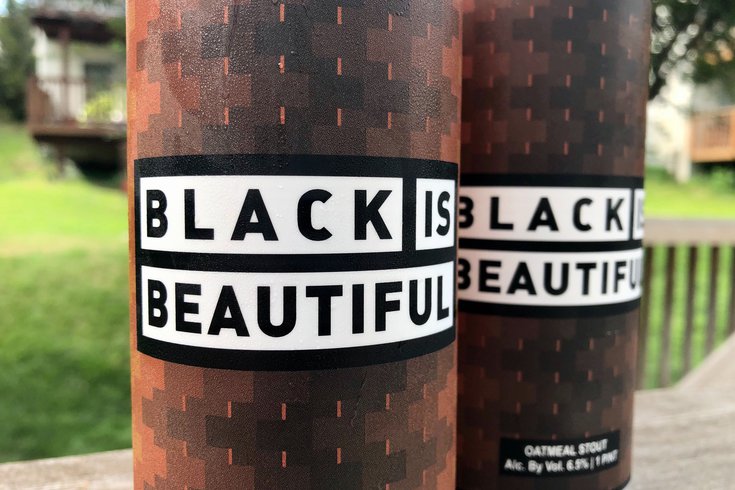 The Black Is Beautiful initiative was started by Weathered Souls Brewing Co., a Black-owned brewery in Texas. Other breweries can participate by using the recipe and donating 100% of proceeds to local organizations that support police reform.

The Callowhill brewery worked with Scott Broussard of Double Eagle Malt in Huntingdon Valley, the Harris Family Brewery in Harrisburg and Two Locals Brewing in Philadelphia to produce the imperial stout. Both Black-owned breweries are preparing to open but have been delayed because of the COVID-19 crisis.

🎉🖤Black Is Beautiful imperial stout with toasted coconut is officially READY FOR RELEASE! Available Wednesday, July 15 at 12pm in our taproom and at our online store. This isn’t an average beer release. Of course we’re excited about the beer, but we’re even more excited about the partnerships its created. We got to work with the amazing people at @twolocals @harrisfamilybrewery and @doubleeaglemalting PLUS, all proceeds will be donated to @blmphilly Support PA’s black-owned breweries and fight for justice for BIPOC. ・ ・ ・ ・ ・ ・ #blm #blmphilly #blackisbeautiful #amplifymelanatedvoices #phillysupportphilly #phillybeer #blackpeoplelovebeer #phillyphire #beerrelease #newbeeralert #imperialstout #goodbeer #beerforall #beerforacause

The limited-release brew is available to buy at Love City, located at 1023 Hamilton St., and online. A four-pack is $15.

The Black Is Beautiful initiative is a collaborative effort among breweries that raises funds for local groups that support social justice and police reforms. It was started by Weathered Souls Brewing Co., a Black-owned brewery in San Antonio, Texas.

Weathered Souls is providing the recipe and the design for the label to breweries around the country. Breweries are then asked to donate 100% of the beer's proceeds.

According to Eater Philadelphia, the Black Is Beautiful brew from Love City has toasted coconut, which was added to Weathered Souls’ recipe.

You can check out which other breweries are participating in the initiative through the Black Is Beautiful website. Currently it states that just over 1,000 breweries have gotten involved. Other local breweries include Attic, Round Guys and Sly Fox.

We are honored to release our version of the Black Is Beautiful collaboration organized by @weatheredsoulsbrewing . This Imperial Stout is rich and bold, brewed with an array of malts to showcase all shades of black. In an effort to raise awareness for the injustices that people of color face daily and to support members of our communities that are in need, we will donate proceeds from this beer to the Pennsylvania Legal Aid Network to help them provide free civil legal aid for low-income, vulnerable people in Pennsylvania. Black Is Beautiful Imperial Stout is now available in 16oz cans at all of our Eastern PA pubs. #BlackIsBeautifulBeer