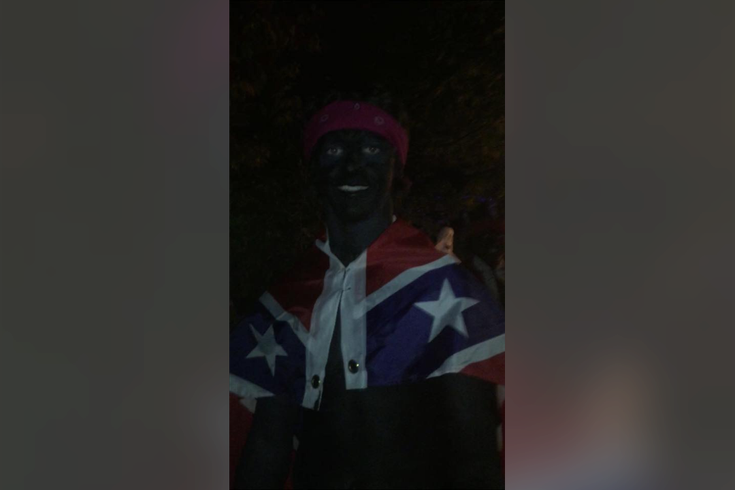 This still frame from a video recorded in Lower Macungie Township, Pennsylvania, shows one of two unidentified trick-or-treaters, who appeared to be dressed in blackface and draped in Confederate flags on Halloween.

The video was later posted to Facebook (and can be viewed below; but be aware it contains explicit language) after being filmed by 17-year-old Esperanza Menendez, according to LehighValleyLive.com. The video shows Menendez confronting the pair about their costumes.

Menendez was reportedly trick-or-treating with her two sisters and a friend during Lower Macungie Township's trick-or-treat night off Route 100.

Rafael Menendez, the girls' father, said nobody else told the pair that their costumes were inappropriate.

"This is my daughter who was the only one surrounded by adults that had the courage to address them," he wrote in the Facebook post with the video.

The father told LehighValleyLive.com the incident  "ruined the night for everybody."

No reports have been filed with police regarding the costumes.

Despite the downfall of NBC host Megyn Kelly after she defended blackface during a broadcast last month, Halloween still has resulted in several related controversies. Blackface is a symbol of racism that dates back to the mid- to late-19th century and minstrel shows, when white actors would darken their skin with makeup to portray unflattering and demeaning caricatures of black people on stage.

This Halloween, a nurse in Missouri posted a photo of her as Beyoncé for Halloween, using blackface, causing her to get fired from her job. In Philadelphia, police are also investigating a photo of an officer who appears to be wearing blackface in a photo he posted to Facebook.