Book to give name and face to Kensington's drug crisis 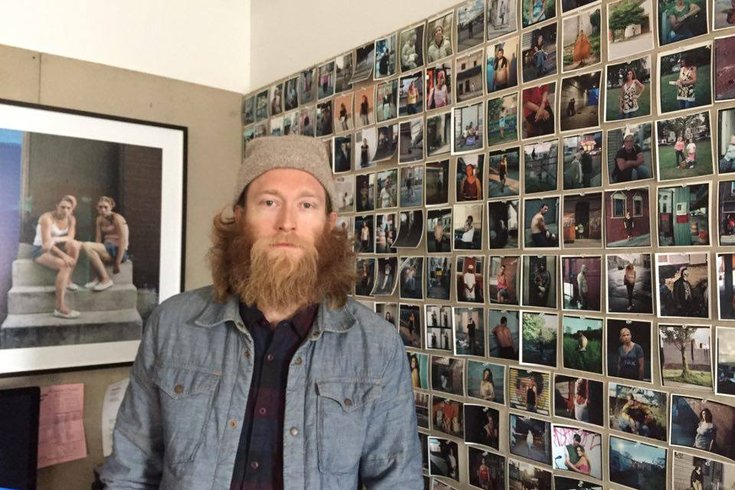 Photographer Jeffrey Stockbridge at his studio on 11th Street near Vine Street. Stockbridge has spent the last eight years documenting the people along Kensington Avenue in a blog called Kensington Blues. On the wall behind him are some of the photos he's taken over the years.

This spring, Jeffrey Stockbridge will conclude nearly 10 years of work in telling the stories of Kensington Avenue, where drugs have left many stranded on the fringes of society.

His book, "Kensington Blues," is the byproduct of a blog with the same name, which he started compiling material for in 2008 and began publishing three years later.

READ: Kensington Blues: Photographer tells the stories of addicts on 'The Avenue'

The project's roots trace back to when Stockbridge was a photography major at Drexel University. Documenting abandoned buildings in West Philadelphia, he met a woman who was working at a nearby crack house.

She said she got her start on "The Avenue," so he headed there and began taking pictures of those struggling with addiction.

In his blog, Stockbridge posted portrait photos of the people he met, who described their daily struggles and how they got there in journal entries and audio recordings.

In December, Stockbridge told PhillyVoice he wanted to humanize a neighborhood that is often defined by sobering statistics like deadly overdoses and drug sweep arrests.

"They’re going through so much," Stockbridge said. "When’s the last time anybody asked them how their day was?"

The new book will be released May 5 during a signing event at Savery Gallery, where Stockbridge's work will be displayed through June 2.

Stockbridge said his book will have a more linear narrative than the blog. The ultimate goal is to give a name and a face to those who are too often generalized or forgotten.

"Everybody’s ... battling their own personal demons and trying to survive," Stockbridge said in December. "It’s about the lengths to which they will continue to suffer but also continue to be strong at the same time."

For more information on the book signing and gallery, click here. To read more on Stockbridge's work, click here.