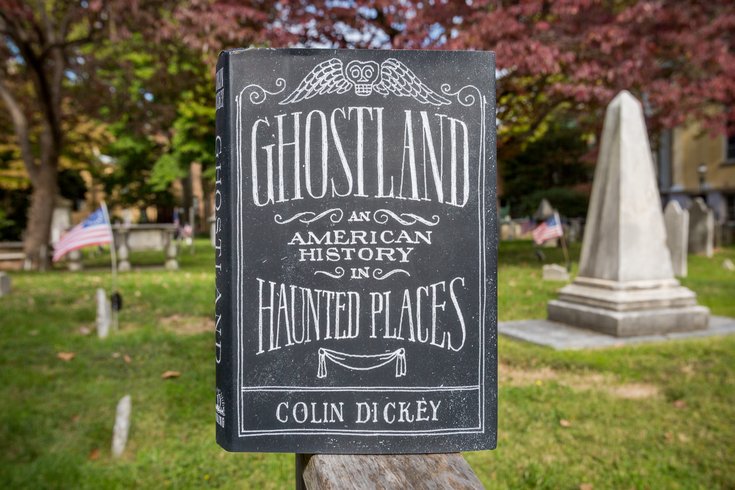 Ghostland: An American History in Haunted Places, by Colin Dickey.

The United States is lousy with ghost stories. History, legend and an unspoken need to believe have inspired us to populate seemingly every battlefield and withering mansion with one spirit or another.

Whether the ghosts in these stories are somehow, you know, real is sort of beside the point in writer Colin Dickey’s fascinating (but rarely spooky) new non-fiction book ‘Ghostland.’ Instead, Dickey’s more concerned with the role ghost stories play in the lives of the living.

History tours use them to boost ticket sales and keep places like The House of Seven Gables in Salem, Massachusetts, in good shape. Young people — like the kids under a bridge in Portland, Oregon, hoping to spot the sad visage of murdered woman — use them to freak each other out. Many of ghost stories appear to be little morality plays — tales of unfinished business and untimely deaths being mulled over by wronged specters in period garb.

Most of them are pinned to a specific location, and Dickey crosses the country to see them firsthand and describe them with clear eyes and artful prose. Though he’s hardly a believer, the author allows the locals to have their fun. A little research is enough to make him, and his readers, skeptical of these small-town claims to fame, but he rarely gives anybody a hard time. (Well, he does have a few stern words for tech-obsessed ghost-hunters with TV shows and matching t-shirts.)

Some ghost stories, Dickey finds, are plainly the result of our collective unconscious attempting to make sense of a chaotic and senseless world. We want justice, order and peace. That said, old ghost stories are sometimes tweaked by their tellers to adapt to the morals and the anxieties of the changing times. A reputed madwoman who kept adding new rooms to her house might become an architectural visionary and feminist heroine if you wait long enough.

Most tellingly, ‘Ghostland’ explores the way America deals with the sins of its past. Many of our worst transgressions come complete with undead apparitions popping up to remind us of their torments — from the witch trials to “Indian burial grounds” to sites of the worst atrocities of the slave trade. We’re a haunted country, rightfully so.