Breaking down the West: How far can St. Joe's go in NCAA Tournament? 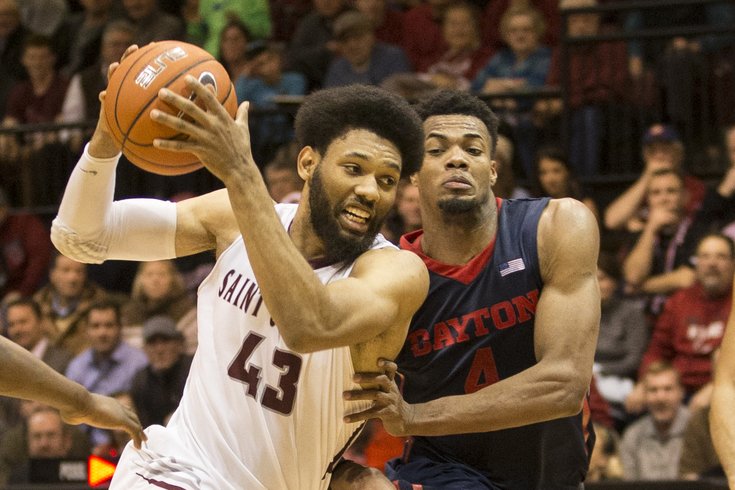 For the first time since 2013, the Big 5 is sending three teams to the NCAA Tournament -- Villanova, Temple and Saint Joseph's. But the way the selection committee laid out the field guarantees that no more than two of those teams will survive past the opening weekend. And if they do make it to the Sweet 16, none of them will have the luxury of playing in the East Region, taking place this year at the Wells Fargo Center in Philadelphia.

Temple and Villanova, the No. 10 and No. 2 seeds in the South, will square off in the second round if both win their opening games on Friday afternoon in Brooklyn. The Owls would need to pull off an upset of No. 7 Iowa, and the Wildcats would need to hold off No. 15 UNC Asheville.

In another corner of the bracket, way out in the West, Phil Martelli and his Hawks are back in the tournament for the third time since their run to the Elite Eight in 2004 with Jameer Nelson and Delonte West. Each of their previous two trips ended in just one game (2008, 2014).

Led by a trio of upperclassmen, St. Joe's is going to be a tough out for any team that overlooks them.

But none of that matters now, as the season has ceased being about a team's accomplishments over 30-plus games. Starting this week, it only matters what you do going forward.

With that in mind, let's take a look at the road ahead of them.

The Atlantic 10 champions' first game of the tournament is actually the last game of the first round and is slated to tip around 10 p.m. on Friday night. St. Joe's will face No. 9 Cincinnati (22-10) out of the American Athletic Conference.

Unlike the Hawks, the Bearcats enter the tournament with a sour taste in their collective mouths. In case you forgot, they were on the losing end of UConn's insane four-overtime win in the conference quarterfinals. But what will make this game tough for St. Joe's is what these two teams have in common: experience.

Cincinnati's lineup has four players -- three seniors and a junior -- that average double-digit points and another four that average six or more. That also means they're balanced. This should be a hell of a game, one of the better matchups of the first round. However, I have to give the edge to St. Joe's in this one. They've got momentum, a better offense, and a game-changing player in Bembry.

OTHER FIRST ROUND GAMES

(1) Oregon vs. (16) Holy Cross/Southern -- Although Oregon is one of the lowest-rated top seeds in the history of the tournament, I still don't think they become the first one-seed to lose to a 16.

(4) Duke vs. (13) UNC-Wilmington -- The selection committee loves putting two teams from the same relative part of the country up against each other in the first round (or second, a la Temple/Villanova). I usually take one 13 seed each year, but this probably isn't going to be the one, especially when UNCW hasn't played a top 25 team all season. The defending champs will move on.

(6) Texas vs. (11) No. Iowa -- Shaka Smart was able to win games like when he was the No. 11 seed at VCU. But now the coach of Texas, there will likely be more pressure on Smart's team to deliver in March. After all, their football team isn't getting the job done, so someone has to. Then again, Northern Iowa is 2-0 against Top 25 teams with wins over UNC and Iowa State. Not too shabby. Clearly, they have the ability to knock off the Longhorns, it just depends on whether or not the stage is too bright. But if you're looking for a potential upset in this region, this game isn't a bad place to start.

(7) Oregon St. vs. (10) VCU -- It's going to be really awkward when Shaka Smart's Longhorns are eliminated in the first round, but his former team, Virginia Commonwealth, pulls off an upset.

Yes, I was planting a seed earlier when I mentioned that Oregon was one of the worst teams ever to be given a No. 1 seed. And that's because I think that St. Joe's actually has a chance to knock them off, potentially making them the first top seed to be eliminated.

Call me a homer, but if you're from this area, odds are you haven't seen much of Oregon. I haven't seen nearly as much of them as St. Joe's, which may be influencing my decision here, but the little I have seen of Oregon has not left me all that impressed. Plus, after the Chip Kelly disaster, isn't there a little part of you that wants to destroy all things Oregon? Me neither...

OTHER SECOND ROUND GAMES

(4) Duke vs. (12) Yale -- I hate Duke, and think that they're kind of overrated this year, but it's always hard to pick against them in March, especially when I have them playing a team like Yale in the second round. In a vacuum, I wouldn't have picked them to go to the Sweet 16, but here I have them playing Yale in the second round and am punching their ticket to the Regionals.

(3) Texas A&M vs. (11) No. Iowa -- A civil war may break out between Texas and Iowa if the 11-seeded Panthers take down another team from the Lone Star State. But I don't live in Oklahoma, Kansas or Missouri, so I should be fine.

As I previously mentioned, this Duke team is not nearly as good as your typical Duke team. Of course, now that I say that they'll go on to repeat as champions. Still, I think they can be beaten. And because it's a lot more fun to have a local team make a deep run in the tournament, I'm going to pick the Hawks here.

After all, we can't count on 'Nova to be that team, can we?

WINNER: The Hawk Will Never Die.

Sorry, but it had to end sometime, Hawks.

WINNER (and winner of the West Region):