The proposed 15-story structure at the northeast corner of Broad Street and Washington Avenue will consist of more than 1,000 residential units and multiple retail spaces 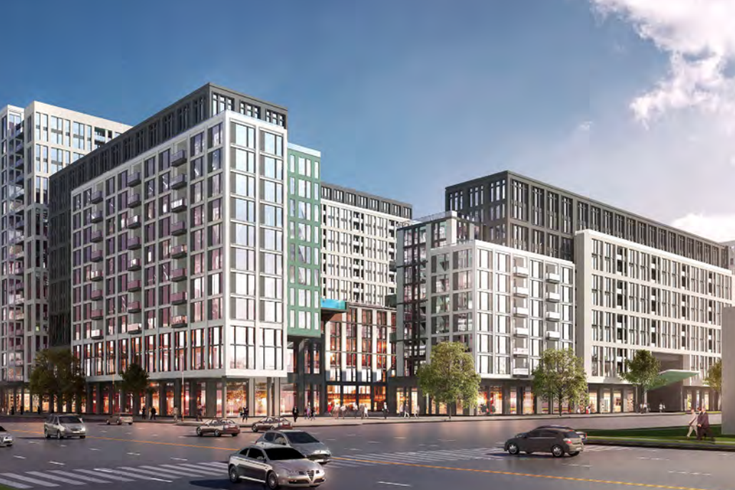 Construction of the 15-story, mixed-use development project at 1001 S. Broad St. is expected to cost about $306 million.

Construction of the long-awaited, mixed-use development project at the northeast corner of Broad Street and Washington Avenue in South Philly could begin soon after years of revisions by developers and criticism from local residents.

A commercial building permit for the proposed 15-story structure at 1001 S. Broad St. was recently issued by the city's Department of Licenses and Inspections.

The building's design plan calls for more than 1,000 residential units, more than 65,000 square feet of retail space on the ground floor and an off-street parking garage. The commercial space will be anchored by a 40,000-square-foot Giant supermarket. Construction is expected to cost nearly $306 million, Philadelphia Yimby reported.

The tower also will consist of a rooftop green space, an entry court along Washington Avenue and floor-to-ceiling windows. The project is expected to be more than 1.5 million square feet of space in total.

The space is owned by Philadelphia developer Bart Blatstein and his firm Tower Investments. BKV Group, which has worked with Blatstein on the forthcoming Piazza Terminal in Northern Liberties, is the architectural design firm behind the project.

The Blatstein-led project at the South Philly intersection has been stalled for years as developers reworked their proposal in an effort to win over support from city officials and the local community.

Blatstein's attempts to seek zoning variances, disapproval from Philadelphia's Civic Design Review board, a lawsuit from the lot's former owner and community resistance stopped Blatstein's plans from ever coming to fruition. In the meantime, the block has remained undeveloped. Blatstein purchased the property for roughly $20 million in 2017.

Developers originally proposed two 32-story towers with a combined total of 1,600 apartments at the site. The project was then tweaked to consist of only one 32-story building, before being eventually scaled down to a 15-story development.

The proposed mixed-use development is just one of several efforts in recent years to revamp the neighborhood surrounding Broad Street and Washington Avenue in South Philly.

Across the street from Blatstein's proposed project sits Lincoln Square, a mixed-use development that opened in 2018 at the intersection's northwest corner.

Blatstein has also proposed a second mixed-use project along Washington Avenue, just one block away at a vacant lot on 13th Street. The 11-story, U-shaped building would consist of 375 apartments, 30,000 square feet of office space, 7,000 square feet of retail space, underground parking and a courtyard in between the building's two wings.

The overhaul and repaving of Washington Avenue to make the thoroughfare safer and more pedestrian-friendly was supposed to begin this summer. However, those renovations have been delayed by at least a year due to funding and scheduling issues caused by the COVID-19 pandemic.