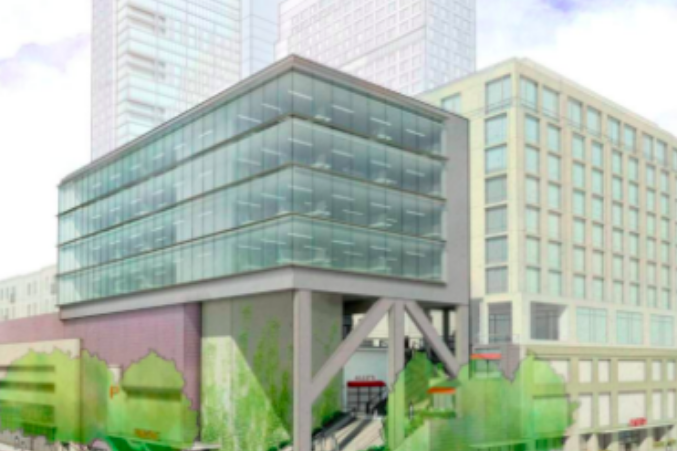 The "megaproject" once planned by developer Bart Blatstein at Broad Street and Washington Avenue is now expected to take on a much different form than the rendering above. This was one of several iterations that included a 32-story tower. The new project will reportedly be helmed by a Giant market.

Developer Bart Blatstein's plans for the northeast corner of Broad Street and Washington Avenue may finally be taking shape.

Redevelopment efforts at the vacant South Philly lot have been proposed and critiqued for much of the last five years, stalling out all while developers were able to complete Lincoln Square on the opposite corner.

Blatstein once said his megaproject, originally envisioned as a pair of towers with retail space, would be "the most amazing" thing he would ever do. His attempts to seek zoning variances, disapproval from Philadelphia's Civic Design Review board, a lawsuit from the lot's former owner, and community resistance all stopped Blatstein's plans, and their revisions, from ever coming to fruition.

A report from the Philadelphia Business Journal now says Blatstein has partnered with Giant Food Stores to make the grocer the anchor of an 80,000-square-foot retail complex, which would be the first phase of a fully revised project. Plans for residential space were not immediately clear.

The decision comes as Giant Food expands across Philadelphia and the rest of the state. The company announced this week it would make a $114 million capital investment in Pennsylvania, adding two new stores in Harrisburg and Pocono Summit, as well as a Giant Direct e-commerce hub near Philadelphia International Airport.

Over the last year, Giant opened its first small-format Heirloom Markets in Philadelphia to appeal to a community-centered urban demographic.

The choice of a Giant at Broad Street and Washington Avenue will bring direct competition to Sprouts Farmers Market, which debuted alongside Lincoln Square at the site's historic rail shed in September 2018.

Further details of Blatstein's plans for the property were not known, but work on the Giant portion of the project could reportedly begin later this year.