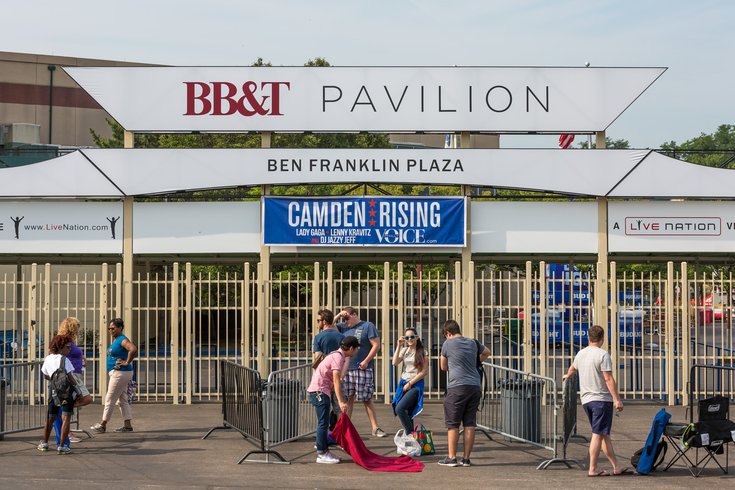 The former BB&T Pavilion along the Delaware River waterfront in Camden will temporarily be called the Waterfront Music Pavilion as Live Nation seeks a new naming rights. partner.

BB&T Pavilion will join the list of names formerly attached to the large concert venue along the Camden waterfront. Its operator, Live Nation, is seeking a new naming rights partner for the 25,000-seat amphitheater.

Live Nation and Truist mutually agreed not to extend their current agreement, effective immediately, and the venue will be called the Waterfront Music Pavilion in the interim, Live Nation confirmed. Truist was created in 2019 from a merger between BB&T Bank and SunTrust Bank.

The Camden venue has had a number of names since it opened in 1995 as the Blockbuster-Sony Music Entertainment Centre, sometimes called the E-Centre for short.

From 2001 to 2008, the amphitheater's name was changed to the Tweeter Center, followed by the Susquehanna Bank Center from 2008 to 2015, when it became BB&T Pavilion.

In 2018, Pollstar magazine ranked the concert venue the second-best amphitheater in the world behind only the Ruoff Home Mortgage Music Center in Noblesville, Indiana.

The Camden venue draws in approximately 560,000 fans annually to an average of 46 shows per year. Live Nation touts a number of benefits for a naming rights partner, including promotional and marketing exclusivity that covers signage both at the venue and in integrated media campaigns. Other benefits include perks for the partner company and its employees, in addition to on-site engagement opportunities.

Live Nation has several upcoming concerts booked at the Waterfront Music Pavilion, including Tim McGraw on May 20, Miranda Lambert on June 11, three Dave Matthews Band shows in mid-July and The Black Keys on July 30.