Naloxboxes will be distributed by Oct. 31; Students and staff will be trained on how to administer the medication 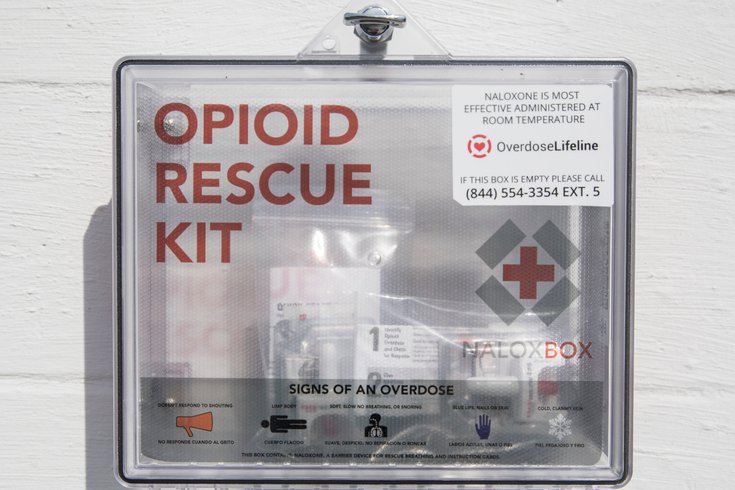 All 150 public and parochial schools in Camden County will receive a naloxone kit — called a 'Naloxbox' — by Oct. 31. The program is a response to the opioid epidemic, which claimed the lives of nearly 300 residents in Camden County in 2020.

Every school in Camden County will soon be equipped with naloxone kits as part of a countywide effort to combat the opioid epidemic and prevent drug overdoses among staff, students and community members.

Every public and parochial school throughout Camden County will receive a Naloxbox — a metal container with four doses of naloxone, a nasal spray medication that is used to reverse opioid overdoses. The kits will be installed by Oct. 31, and students and staff will receive trainings on how to administer naloxone throughout November.

Highland Regional High School in Blackwood was the first to receive a Narcan kit, though the Gloucester Township school has kept the medication in its building since 2017. Overall, Camden County officials will distribute 275 kits to 150 schools in the area, and school officials will be able to contact the Chiefs of Police Association to replenish their supply as needed.

"We have been working to address the opioid epidemic for the better part of a decade, providing tools and resources for our community," said Louis Cappelli Jr., director of the Camden County Board of Commissioners. "This is now the next step in that journey to combat the evolving fentanyl issue that is appearing in a variety of narcotics. We are distributing this necessary medication to ensure that every institution in the county can respond to an overdose on school property as well as educate students and staff about opioids, especially in the age of fentanyl."

The naloxone program is also a response to the death of a 12-year-old boy who was found unresponsive on a school bus at Gloucester Township Elementary School in January. A school nurse performed CPR on the child before emergency responders showed up with Narcan. The boy was taken to a nearby hospital and pronounced dead on Feb. 1.

The boy's uncle, 36-year-old Troy Nokes, was later charged with aggravated manslaughter after prosecutors alleged Nokes manufactured fentanyl in the home he shared with the child the weekend before his death.

Nokes ordered the boy to clean paraphernalia that contained the deadly synthetic opioid. Witnesses said that the boy was not wearing gloves.

"Students are particularly at risk because they are often not aware of the true risks associated with drug use," said Jacqueline Keehn, the school nurse at Black Horse Pike Regional High School in Blackwood. "They are impressionable and subject to peer pressure and these drugs present a great risk in every district in our county. Having the tools to address these challenges is critical in potentially saving lives but will also help in destigmatizing the conversation centered around substance misuse."

The program will cost $30,000 total across all schools with funding provided by the Office of Mental Health Addiction. The naloxone is being distributed at no cost to schools through a partnership with New Jersey's Department of Health, the Camden County Prosecutor's Office, and local police departments.

"Having our school officials up to date on overdose response, along with providing resources to help combat overdoses, will make our schools safer overall," said Commissioner Virginia Betteridge, a liaison to the state Health Department. "With the opioid epidemic still gripping our communities, our schools need to be prepared for any type of emergency that may arise."