Christian Dunbar, 42, a former Temple football player, served the city from July 2019 until his termination in September 2020 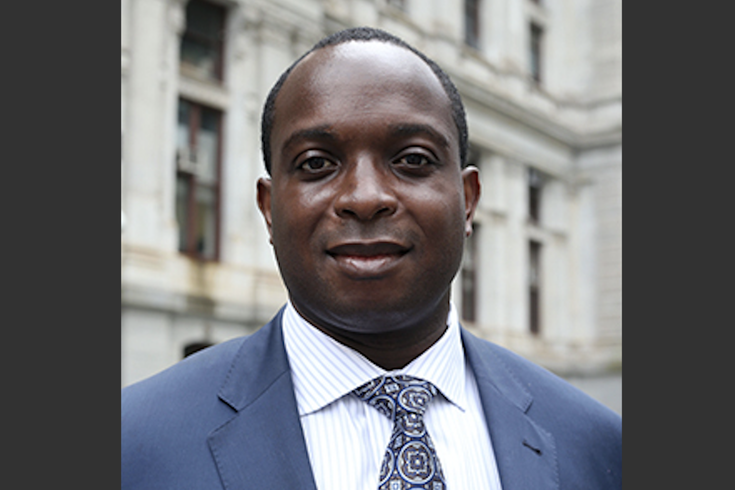 Dunbar, 42, was appointed city treasurer in July 2019. He managed the city's debt obligations and bank accounts until he was terminated in September 2020 after being charged. At the time, Mayor Jim Kenney said the charges were not related to his governmental work. A subsequent audit of the Treasury Department found no evidence of fraud.

During a court hearing, the ex-treasurer admitted to obtaining U.S. citizenship by providing false information about where and with whom he was living, where his child was residing, and submitting a false lease and W-2 tax form to U.S. Citizenship and Immigration Services, prosecutors said.

Dunbar used his fake marriage from 2012 to 2016 to complete the process of becoming a U.S. citizen, and filed divorce papers to end his sham marriage two months after obtaining citizenship in 2017, prosecutors said.

"Christian Dunbar's conduct in this case demonstrates a shocking level of misconduct for anyone, let alone a senior official with the City of Philadelphia whose job it was to oversee the city's fiscal stability," said U.S. Attorney Jacqueline C. Romero. "Our office will continue to work with our law enforcement partners to investigate these types of complicated public corruption cases, and hold public officials accountable."

Neither Ndiaye-Dunbar nor Christian Dunbar's first wife, whose name has not been disclosed, were charged in the case.

Dunbar also admitted in federal court to not filing his personal income tax returns for the years 2015, 2016 and 2019 — the last of which he was serving as treasurer, prosecutors said.

He also was accused of embezzling $15,000 from clients during a previous job as an advisor for Wells Fargo and claiming tax deductions for false business losses related to a partnership with a medical marijuana firm. Prosecutors agreed to drop those charges related to those offenses in exchange for a guilty plea on immigration and tax fraud charges, the Inquirer reported.

Dunbar's guilty plea came days before he was scheduled to stand trial. The ex-treasurer faces up to 10 years in prison. A sentencing hearing will be held in January.

"Christian Dunbar fraudulently obtained U.S. citizenship, building his life and career here on a foundation of lies," said Jaqueline Maguire, special agent in charge of the FBI's Philadelphia Division. "It's a sad irony that such a dishonest person wound up city treasurer, a key position of public trust. Corruption like this corrodes people's faith in government, which is why the FBI works so hard to hold crooked public officials accountable."

In May 2021, Dunbar was charged in a superseding indictment with multiple counts of filing a false income tax return and failure to file tax returns, according to the U.S. Attorney's Office.