Can South Philly street be city's next great green space? 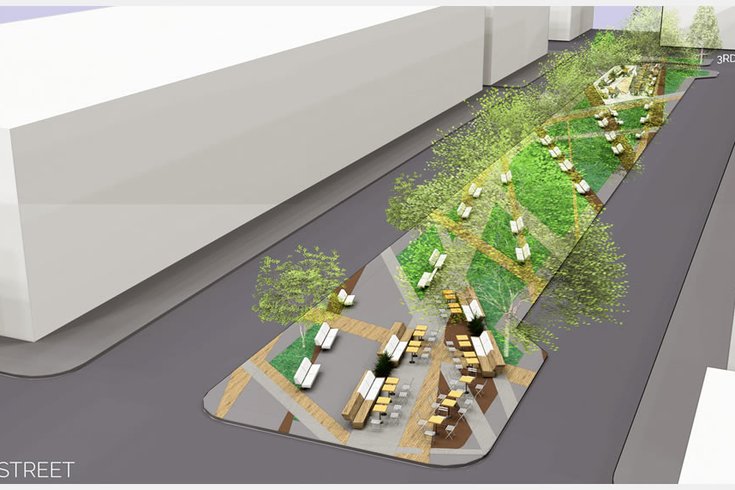 This rendering shows the plan to turn Bainbridge Green into a useable green space.

A strip of Bainbridge Street could become one of Philly's next great green spaces -- if the funds become available and those behind the project can alleviate community concerns.

The Friends of Bainbridge Green have been working for more than a decade to revive the area between 3rd and 5th streets on Bainbridge, according to Curbed Philly. Specific plans have been in place for more than three years.

The Friends' intention is to make the area a useable public space for Queen Village residents — something that, for anyone who lives nearby, knows that it's mostly not. Aside from the handful of benches and incremental efforts by the Friends, most of the space is dedicated to parking; attempting to squeeze by on the small strip sidewalk that separates parked cars and fences in the middle of Bainbridge is like threading a needle.

Parking and traffic flow, though, are important to keep local businesses healthy, neighbors said at a community meeting last fall. As the Passyunk Post reported, the Friends presented three potential options at community meetings before settling on their current goal: A 20,000 square-foot park, created by reducing parking by 10 percent.

The plan would replace angled parking on the south side of Bainbridge with parallel parking, extend the plaza at 5th Street, turn Passyunk Avenue from Bainbridge to South into a one-way street (therefore adding 10 parking spaces and offsetting the spaces eliminated by nixing angled parking on Bainbridge) and would eliminate the 4th Street roundabout. 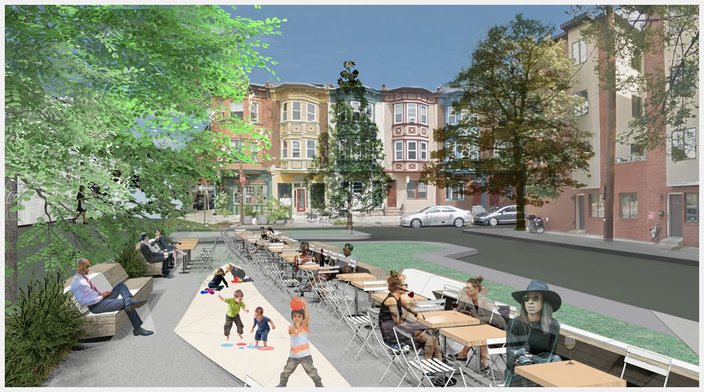 This rendering shows the plan to turn Bainbridge Green into a useable green space.

The Friends estimate that the new park could increase foot traffic by 20 percent, leading to a possible 18 percent increase in business in the area. Additionally, expanding the green area into a useable park would bring Bainbridge Green back to its roots that are more than a century old. Per PlanPhilly:


Bainbridge Green came into being as a park space in 1906 after market sheds, built in the middle of the street during the 1830s, were demolished by the city. In their stead a park was established due to the efforts of the City Parks Association, as part of its advocacy for better green spaces in crowded neighborhoods. During the mid-20th Century the park space was reduced to make room for more parking.

Now neighbors hope to reset the balance of uses along this stretch of Bainbridge once again, making room for pedestrians, places to rest, and parking alike.

Doing so would be costly, however. As Curbed noted, a study conducted in 2013 estimated that the project would have a price tag between $5 million and $6 million.

The Friends are hosting a fundraiser/festival to raise money and awareness in support of the project on Sunday, Oct. 16, from 10 a.m. to 3 p.m.

The event will take place on the south side of Bainbridge between 3rd and 4th streets and will feature food from local vendors and chefs, live music and family activities. Tickets range from $25 to $150 and can be purchased here.