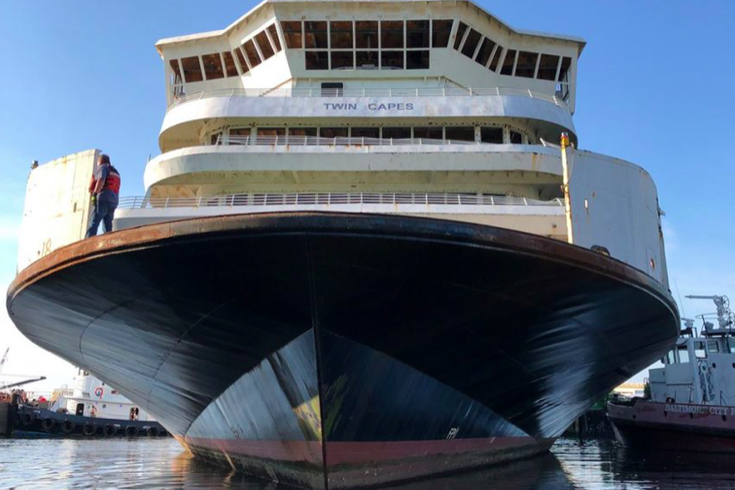 The MV Twin Capes ferry joins the acclaimed Del-Jersey-Land artificial reef off the coast of Cape May, New Jersey.

The former MV Twin Capes ferry, a storied vessel on the Cape May-Lewes fleet, will have a new place in history when it's treasured contents are featured on the Discovery Channel's "Salvage Dawgs" series.

The 2,100-ton ferry was intentionally submerged off the Atlantic coast in June in order to expand an artificial reef system.

The crew at Black Dog Architectural Salvage, a Virginia-based business that finds and sells antiques, got its hands on the old MV Twin Capes and managed to extract some interesting items that will be featured on "Salvage Dawgs."

Dozens of restored goods from the ship are now available for sale at the company's online shop, from sconces, deck lights and a pyramid skylight to a mural of a maritime scene, as well as various odds and ends.

Twin Capes, one of the original three Cape May-Lewes vessels in the 1970s, was declared surplus in 2010 and was last used for vehicle and passenger service in 2013. The 320-foot long vessel couldn't be sold to another ferry service and was eventually purchased by the Delaware Department of Natural Resources and Environmental Control (DNREC) for $200,000.

The vessel is now part of the Del-Jersey-Land submerged reef, which also includes the ex-destroyer USS Arthur W. Redford and the Zuni/Tamaroa, a harbor tug that survived the Battle of Iwo Jima in World War II before becoming a U.S. Coast Guard Cutter. The Zuni/Tamaroa is also featured on "Salvage Dawgs."

You can peruse the salvaged items from the ship here.