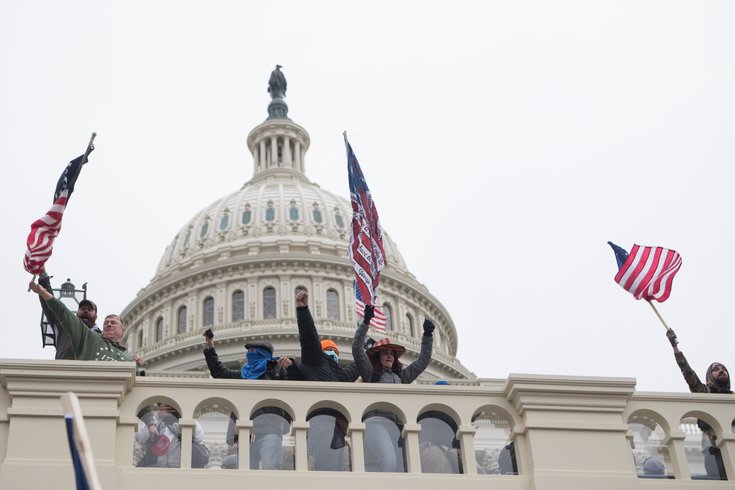 Surveillance footage from Jan. 6, 2021, shows Phillip S. Young, 60, of Sewell, standing on the stairs leading to the Upper West Terrace of the U.S. Capitol at 2:46 p.m. – about 26 minutes after Congress members were told to evacuate the Senate chambers, disrupting the certification of the 2020 presidential election results.

Someone in the crowd shouted "One, two, three, go," and Young rushed up the stairs, investigators said. Young allegedly was among several people who picked up a metal barricade and pushed it into a line of Capitol Police officers as they attempted to control the rioters seeking to enter the building.

Young briefly pushed past the barricade "before being sprayed with a chemical irritant and pushed back," according to the criminal complaint. At 3:54 p.m., Young allegedly let the air out of the tires of a U.S. Capitol Police vehicle in the east courtyard. A video of that incident was recorded by another Capitol rioter, the complaint states.

He will be sentenced Jan. 31. His most serious offense – the assault charge – carries a maximum sentence of eight years. He also could face a fine.

Young was indicted in August 2021 following an FBI investigation. As agents shared an image of Young wearing an American flag bandana, online sleuths who dubbed themselves "sedition hunters" circulated a photo of Young slashing the tires of the U.S. Capitol Police vehicle. The sleuths labelled him "FashNSlash."

The image of Young slashing tires shows him wearing the bandana and a jacket featuring the logo of Local 28 of the International Brotherhood of Boilermakers, located in Eastampton, Burlington County. These images helped investigators identify Young.

A pair of witnesses told the FBI that they met with Young on numerous occasions and provided his home address and a phone number, according to the criminal complaint. Investigators determined the phone was used at the U.S. Capitol on Jan. 6, 2021.

Young is among several South Jersey residents who have been accused of participating in the insurrection.

Stephanie Hazelton, 50, of Medford, pleaded guilty last month to interfering with police officers and aiding and abetting. In August, Marcos Panayiotou, 30, of Cinnaminson, pleaded guilty to parading inside the U.S. Capitol during the riot.

Earlier this year, Lawrence Stackhouse, 34, of Camden County, was sentenced to two weeks in prison in June for his role in the riot. Robert Petrosh, 53, of Mays Landing, received a 10-day prison sentence for telling Capitol Police to "give us Nancy" and stealing microphones from the office of House Speaker Nancy Pelosi.

James Rahm Jr., 63, of Atlantic City and Philadelphia, was found guilty of obstruction and disruptive conduct in a restricted building for breaking through the police barricades and entering the Capitol.

In the 21 months since the riot, 880 people have been arrested for crimes stemming from their involvement in the insurrection. That includes 270 people who were charged with assaulting or impeding law enforcement, according to the U.S. Attorney's Office.