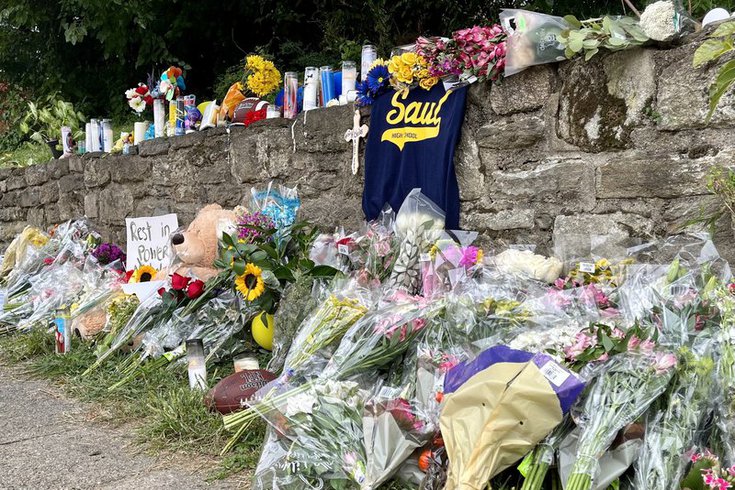 Saleem Miller, 16, was arrested Tuesday in connection to the Roxborough High School shooting, which killed Nicolas Elizalde, 14, and wounded four other teenagers on Sept. 27. He is among six people wanted by police; four have been arrested.

A fourth suspect has been arrested in connection with the fatal shooting outside Roxborough High School that killed 14-year-old Nicolas Elizalde and injured four other teenagers following a football scrimmage on Sept. 27.

The 16-year-old male was being processed by the Homicide Division, Deputy Commissioner Frank Vanore tweeted Tuesday afternoon. The suspect, later identified by police as Saleem Miller, is the fifth suspect identified and the fourth taken into custody.

MORE: U.S. Postal Service warns people not to use drop boxes on Sundays or federal holidays as mail theft rises across the country

Vanore did not provide further information on the suspect, but he said Dayron Burney-Thorne, a 16-year-old wanted on murder charges, is still a fugitive.

@phillypolice just took a fourth suspect wanted in connection to the Roxborough High shooting/homicide into custody. A 16 yo male is currently being processed at the Homicide Division. This is the fifth person ID'd, Dayron Burney-Thorne is still a fugitive. Details to follow.

The other suspects arrested are Yaaseen Bivens, 21, Zyhied Jones, 17, and Troy Fletcher, 15. Burney-Thorne, the first person named by police as a suspect, is described as 6 feet 3 inches tall and weighing 215 pounds. He is considered armed and dangerous, police said. The U.S. Marshals are offering a $5,000 reward for information that leads to the arrest of Burney-Thorne, in addition to the police's $45,000 reward.

Police have not detailed the alleged roles that the suspects played in the shooting, but they have said all will be charged with murder, aggravated assault, reckless endangerment and weapons offenses.

Police believe six people – five shooters and a getaway driver – were involved in the ambush shooting behind the Roxborough High School, where football players had been walking back to their locker room following an afternoon scrimmage.

The five shooters fired more than 60 bullets at a group of Roxborough football players who were walking along the 4700 block of Pechin Street, police said. The sixth suspect remained at the wheel of a stolen Ford Explorer during the shooting. The vehicle had been parked for nearly six minutes before the shooting, leading investigators to believe the attack had been planned in advance, police said.

After the shooting, four of five shooters returned to the vehicle, which sped off and was found later in a Southwest Philly parking lot, police said. The fifth shooter continued pursuing a 17-year-old who police believe was the intended target, before fleeing on foot after his gun ran out of bullets.

Elizalde was not the intended target of the attack, police said. He was a freshman at the city's agricultural high school, Walter B. Saul High School, also in Roxborough. Saul does not have a football team, so Elizalde played on the Roxborough junior varsity football team. He suffered a fatal gunshot wound to the chest.

The other four teenagers struck by gunfire suffered non-life-threatening injuries. Three of them were on the Roxborough football team. Investigators say the fourth, the 17-year-old believed to be the targeted, is not a Roxborough High School student.

Police have released surveillance images that show three suspects. Investigators have not said whether any of the people in the photo are among those who have not been arrested. Police also have not discussed the motive for the attack.

Anyone with information about the shooting can call 911 or send an anonymous tip by calling or texting (215) 686-8477 or by providing information via the police department's website.