Yaaseen Bivins, 21, is among 6 suspects sought in the death of 14-year-old Nicolas Elizalde, a freshman at Saul High School 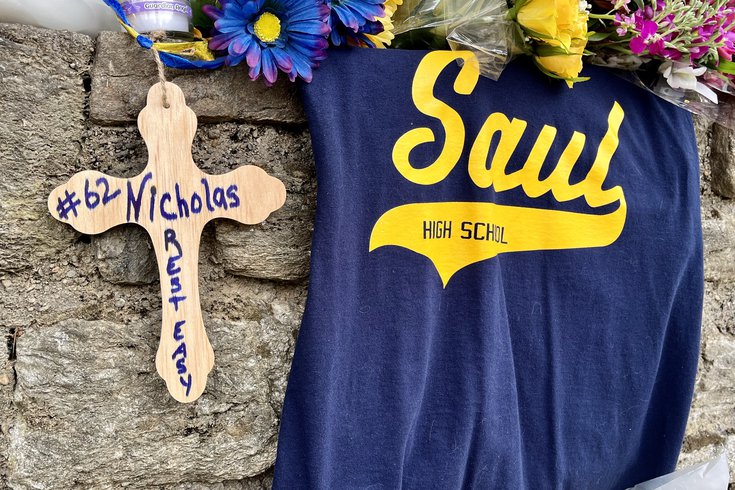 Yaaseen Bivins, 21, is charged with murder for his alleged role in the Roxborough High School shooting that killed Nicolas Elizalde, 14, and injured four other teens on Sept. 27. Elizalde was a student at Saul High School and played football on Roxborough's junior varsity team.

A 21-year-old man has been arrested for his alleged role in the mass shooting outside Roxborough High School that killed Nicolas Elizalde and wounded four other teenagers last month.

Yaaseen Bivins, who has been charged with murder, is the first suspect arrested by police. Investigators say five shooters opened fire at Roxborough football players as they were leaving the school's stadium after a scrimmage. A sixth suspect remained in an SUV during the shooting as the getaway driver.

Last week, police issued an arrest warrant for Dayron Burney-Thorne, 16, who is wanted for murder and remains at large. They also released surveillance images of three additional suspects; the District Attorney's Office declined to say whether Bivins was among those pictured.

Investigators also have not detailed the specific actions allegedly taken by Burney-Thorne and Bivins.

"Philadelphia Police and our partners in law enforcement continue to tirelessly investigate this incident, and we ask for the public's help in identifying the remaining suspects involved so that they can be apprehended by law enforcement and held accountable in a court of law," District Attorney Larry Krasner said.

The city is offering a $45,000 award for information that leads to an arrest and conviction in the shooting.

Bivins was arrested by federal officials after investigators found a receipt for an ammunition purchase in the vehicle believed used in the shooting, Police Chief Inspector Frank Vanore said at a press briefing, NBC10 reported. As a felon, Bivins cannot legally purchase bullets. After he was arrested, investigators determined the bullets he bought were used in the shooting.

In August, Bivins was convicted of causing a vehicular death and related charges for striking a pregnant woman while racing on North Broad Street in 2020, court records show. He was acquitted of third-degree murder of an unborn child and other charges.

Bivins was out on bail and awaiting sentencing when the Roxborough shooting occurred, the Inquirer reported.

The shooting occurred Sept. 27 on the 4700 block of Pechin Street, which runs between the back of the high school and the football field.

At 4:41 p.m., five males got out of a stolen Ford Explorer that had been parked on the block for six minutes and sprayed more than 60 shots at the football players, investigators said. After the barrage, four of the five gunmen returned to the SUV, which then sped off. The vehicle was found at a Southwest Philly parking lot later that night.

The fifth shooter kept pursuing a 17-year-old boy, who is believed to have been the target of the shooting, but he ran out of bullets and fled on foot, police said.

Elizalde, who suffered a fatal gunshot wound to his chest, was not the intended target of the shooting, police said.

Though he was a freshman at Walter B. Saul High School, Elizalde played on Roxborough's junior varsity football team because his school does not have a team of its own. He previously had attended school in Havertown, Delaware County, but he had been accepted into Saul, the city's agricultural high school. His mother said they had intended to move to Philly later this year.

The other four teenagers struck in the shooting suffered non-life-threatening injuries. Three of them were on the Roxborough football team. The fourth, the 17-year-old believed to have been targeted, is not a Roxborough High student, investigators said.

Investigators have not revealed any known motives for the attack. Bivins also was charged with four counts of aggravated assault.