Carlos Ruiz on his Philly homecoming: 'It's going to be special' 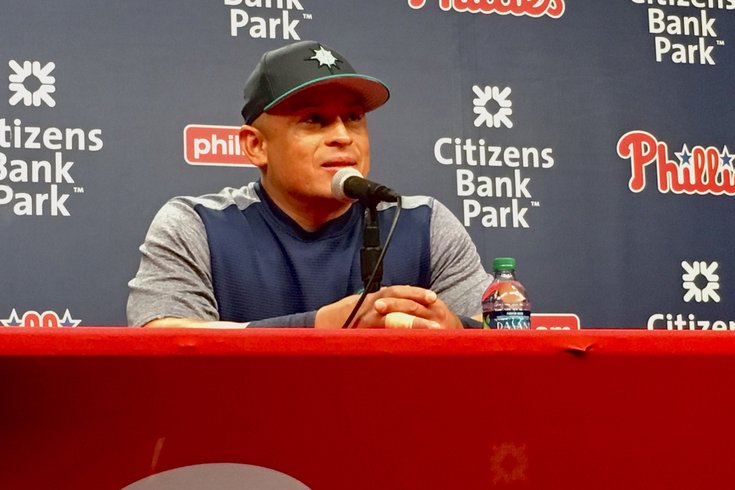 Carlos Ruiz returned to Citizens Bank Park on Tuesday for the first time since being traded away in August.

Carlos Ruiz lost track of how many times he’s watched the video of Brad Lidge rearing back and firing his signature slider by Tampa Bay’s Eric Hinskie and into his waiting glove.

And the number of times has he signed a photo featuring himself hugging Lidge seconds later?

Ruiz, now 38-years-old and wearing the navy and teal of the Seattle Mariners after 17 years in the Phillies organization, carries that memory with him wherever he goes. He has framed photos of it in each of his houses, and at his mother’s home in Panama, too.

Nearly nine years has passed since that day, but no one in Philadelphia has forgotten that iconic moment, the night the Phillies won their second World Series and the city ended a quarter-century drought without a championship of any kind from their four major pro sports teams.

On Tuesday night, that memory will return to Citizens Bank Park when the video highlight plays on Phanavision and the beloved catcher emerges from the visiting dugout. Ruiz is in town this week for Seattle’s brief, two-game series in South Philly.

Ruiz isn’t in the starting lineup on Tuesday. But whenever Seattle manager Scott Servais sees fit, or, more likely, when the Phillies play tribute to him in between innings regardless, Ruiz’s Philadelphia story will be celebrated.

And everyone can pretty much guarantee the kind of reception he’ll get from the Phillies faithful.

“It’s going to sound like boos, even though they’re saying Chooch,” Phillies first baseman Tommy Joseph said. “They loved him here. He was an icon here.”

Ruiz, the starting catcher on the Phillies five division title teams, two-time pennant winners and ’08 World Series champions, a former All-Star, and the receiving end of a battery in four no-hitters (including one perfect game), is aware of his status as a fan favorite and unlikely icon.

He was signed by the Phillies as a 19-year-old infielder for the paltry sum of $8,000 in December of 1998. He appreciated every step of his journey to big league success and often reminds his young teammates of the hard work that’s necessary to achieve their own dreams.

But that doesn’t mean Ruiz is comfortable being the center of attention in a night that could very well turn into a Chooch Lovefest in the same way Aug. 16 of last season turned into Chase Utley Appreciation Night. In a pregame press conference on Tuesday, Ruiz spoke calmly and evenly under the hot lights in the media room, but his eyes told the real story.

Ruiz’s emotions were already about to boil over four hours before first pitch while talking to the press. He has had preparation, though, only because he was in the Phillies dugout when Utley returned and when Jimmy Rollins had his own Philly homecoming, too.

“I was almost crying,” Ruiz said of the thunderous, extended ovation Utley received at Citizens Bank Park last summer. “It never crossed my mind that I was going to be on that side. I’m so close to seeing what’s going to happen tonight.

Ruiz got a headstart on his homecoming tour on Monday, a day off for both the Phillies and Mariners. He invited his current Seattle teammates over for a barbecue at the house he’s maintained in the Philadelphia area and had a few old friends stop by for hearty hugs, too.

Filled with a mixture of nerves and excitement, a lifetime of memories came flooding back for Ruiz when he pulled up to One Citizens Bank Way early Tuesday afternoon.

The phone call from then-assistant general manager Ruben Amaro Jr. in early May of 2006, telling him he was being summoned from Triple-A to become a big leaguer for the first time. The entire 2008 season. The postseason. The parade. Catching Roy Halladay’s perfect game and Cole Hamels’ final start in a Phillies uniform, a no-hitter at Wrigley Field. Just hanging around good teammates and good friends.

Ruiz will forever be celebrated in Philadelphia as a core member of the most successful era in Phillies history. He’ll get his ovation on Tuesday night and then leave town less than 24 hours later as he continues to try to extend his playing career in the American League. Perhaps he’ll return to the Phillies in the not-too-distant future as a coach or instructor.

But the memories endure.

“I always say it doesn’t matter what team I’m on, I have respect for those young guys (with the Phillies) and I really miss them,” Ruiz said. “That’s one thing I tell my teammates now with the Mariners. … it’s what I teach them, and show how special it is to me. It’s about family. Staying together.”