The basic tenor of that backlash: Why didn’t he talk about this in front of his constituents at, say, a town hall instead of holding a press conference in a sterile, federal-building conference room?

Despite the current ratcheted-up war on media, the press remains a conduit through which a message can get amplified and heard. I was happy to get the opportunity to be there when Toomey faced questions about the controversial matter.

What I wasn’t happy about when I woke up Tuesday was my decision to rely on embedded video in a longer story to share the question I asked, and the answer he provided, at that press conference.

I hope you’ll indulge me as I revisit it.

Here’s what I asked Toomey:

“Senator, do you understand the concerns of people who see a Friday night flurry of activity with scribbled notes coming in on legislation and thinking that’s not really the way the system is supposed to work?” 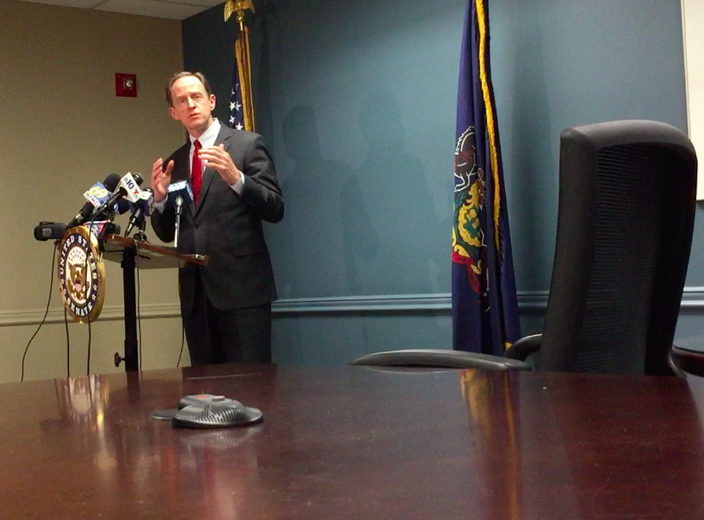 “I would just have to say I’ve served for six years in the (U.S.) House (of Representatives) and this is my seventh year in the (U.S.) Senate. I’m not sure I’ve ever seen a major bill advance through Congress and not be subject to a lot of little tweaks late in the process.

“That is the nature of the process. It is late in the process. The handful of senators or congressmen that have not made their decision finally make their decision, and sometimes there’s a negotiation over ‘what does it take to get there’ decision. This is part of the legislative process.

“Let me be clear about this: The ideas in this bill have been public, litigated, understood, debated for, in many cases, years, in all cases months at least.

“We had a markup in the Senate Finance Committee, which is a term we use for a meeting where a bill is put on the table and it is open to any amendments. We had many dozens of amendments. We had heated debate. So, yes, there were final tweaks – very, very minor tweaks around the edges – the last day or so. That is a very typical part of the process.

“The Democrats can say what they would like, but there are facts that are rather stubborn. It’s an unambiguous public fact that we had a markup in the committee. This is a matter of public record. It was on TV. All the amendments were publicly offered again. It was televised, OK?

“So, if they choose to deny there was a process, that’s going to be a pretty hard argument to make since it was a very, very open and public process.”

While I don't think that is in any way, shape or form how the legislation-crafting process should happen (the lobbyist-heavy dynamic in particular), I wasn’t as closely attuned to the actions leading up to the overnight Saturday vote as the folks who were there.

So, I decided to reach out to somebody who witnessed that process. Since Toomey said “the Democrats can say what they would like,” an offer was extended to his Democratic peer in D.C. – Sen. Bob Casey – to weigh in.

Attention was directed to a Tweet that would serve as a “useful graphic” regarding his stance.

Remember when the GOP complained about the ACA being "rushed through?"

Well, here is what a truly rushed legislative process looks like. pic.twitter.com/T0QoyPro36

Here’s what he had to say from there:

“As I’ve said before, Senate Republicans engaged in a rushed and rigged process to jam through a tax scheme that will raise taxes on many in the middle class while lavishing the wealthy and biggest corporations with massive giveaways.

“The first time I saw the tax bill, which moves around upwards of $10 trillion in our economy, was late on a Thursday night, the legislation was passed out the Finance Committee the following Thursday and the Senate two weeks later – to say this process was irresponsibly rushed is an understatement.”

In any event, don't expect the divided camps to hush up anytime soon. There's still some work to be done before the bill reaches the president's desk.