Cat set free after 5 years behind a wall 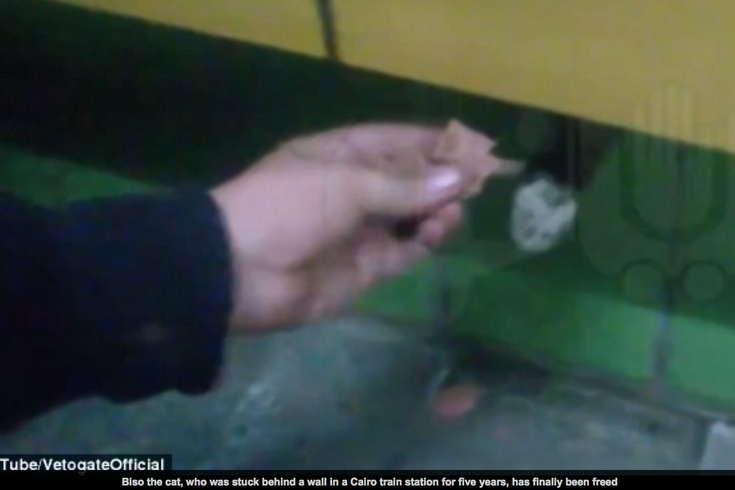 The legend of the monkey trap is pretty well-known. You drill a small hole in a gourd, you put a prize inside, and when the monkey grasps the prize, it can't remove its clenched fist because the hole is too small for it.
Someone in Cairo forgot to let a kitten named Biso in on that. Five years ago, the Daily Mail reports, Biso crept into a hole in the wall at a downtown Cairo train station. Whatever he found back there kept him occupied long enough to grow too big to get back out. He was a kitten no more.
Biso survived with the generosity of an elderly man named Uncle Abdo, who came by the wall at Mohamed Naguib metro station every day, feeding the captive cat scraps of food through the hole.
It was only last month that a concerned citizen spotted Biso's tail protruding from the hole and posted a picture of it to an animal rescue page on Facebook. A caption on the photo explained that the wall couldn't be torn down because it would be considered damage to public property.
Unwilling to forsake Biso, animal rights activists pressed the case further with police, who authorized a rescue mission that took five hours.
And after all that, Biso instantly ran off without so much as a sidle to the leg of Uncle Abdo. That's why dog people are dog people.