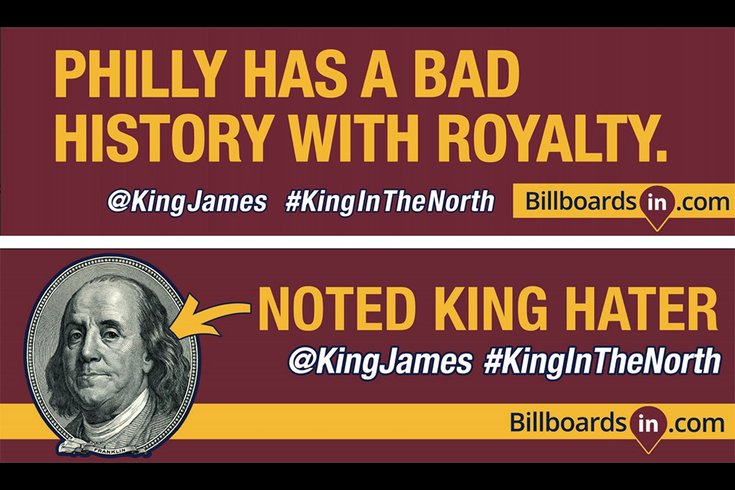 Two billboards, including this one, are going up Tuesday morning along I-95 in Philadelphia near the Wells Fargo Center. They were placed by Global Marketing Partners CEO and avid Cavs fan, James Betschel, who's fighting back after a Philadelphia business put up billboards in Cleveland courting LeBron James.

With Cleveland Cavaliers forward LeBron James set to become a free agent at the end of this season, many fans in Philadelphia have been dreaming of swaying the basketball star to our home team, culminating earlier this year three billboards placed in Cleveland with the hashtag #PhillyWantsLebron.

Now a Cavaliers fan is giving Sixers fans a taste of their own medicine with two new billboards going up Tuesday morning along I-95 outside the Wells Fargo Center. They were placed by James Betschel, CEO at Global Market Partners, who said he was inspired to act by his sons. Betschel partnered with Ohio advertising company BillboardsIn.com to execute the campaign.

The billboards play on Philadelphia’s rich history of inventing freedom (what did you ever do, Cleveland?) and playing up Benjamin Franklin as a “Noted King Hater,” referencing the star player's “King James” nickname.

The second billboard reads, “Philly Has a Bad History with Royalty.”

Both billboards sport the #KingInTheNorth tag.

“LeBron means so much to the people of Ohio,” Betschel said in a statement. “I just wanted to remind him that the grass might look greener, but there’s no love like hometown love and no substitute for the kind of multigenerational legacy he has crafted in Cleveland.”

"When you look at Lebron, he brings a lot more to a city than just once-in-a-lifetime talent," Betschel continued. "He is a transformational leader, especially for the younger generation. When you think about that kind of value, the price of a few billboards seems like nothing."

The billboards courting James in Cleveland were placed by Power Home Remodeling, a roofing and window contractor with headquarters in Philadelphia.