Richard Nixon – at least a pitch-perfect digital reincarnation – lives on.

And surprisingly, he’s from Palmyra in Burlington County. His grandparents farm in South Jersey. He loved high school Drama Club.

And he roots for Philly sports teams. (Well, that part isn’t so surprising.)

Nixon lives on, at least in the personae of @dick_nixon, the Twitter account of South Jersey-born playwright Justin Sherin.

And the reincarnated Nixon is just as shrewd, cunning and calculating as you may remember, though he’s moved on to analyzing current events and today’s newsmakers.

As his Dick Nixon character pithily observed last week about the disarray in Congress over selecting a new Speaker of the House:

The fellow who until not long ago was majority whip -- who should know about every boyfriend, whore, and buried body -- can't get the votes.

And here's what he wrote about Washington D.C. journalists, spot-on and laugh-aloud funny: "Bunch of drunk bastards sitting on their fat butts pretending, wishing, praying to God above that they're in the arena."

Which is of course why I wanted to write about online Dick Nixon.

Sherin’s digital portrayal of an alive, kicking and conniving Nixon, conveyed through acid-tongued commentary, began as so many things do in many a man’s life: a gambit aimed at impressing a woman.

While he holds a Master of Fine Arts degree from Yale Drama School and his plays have been produced at the Royal Court Theatre, the Old Vic, the Royal Shakespeare Company, Sherin’s wider fame has come online.

Stymied for a time with writing plays and then struggling to get them produced – “I had no self-awareness at that point and all the edges to my writing were shaved off” – Sherin turned to Twitter for a bit of writerly therapy.

First he tried on the new online stage by posting as Frank O’Hara, a poet read and admired by the character Don Draper in “Mad Men.”

Sherin liked the immediate feedback of Twitter. He also learned something new about writing from the stagecraft the Twitter platform requires.

Here’s a recap, as Sherin recalled in a recent essay:

“Playing Frank taught me that online acting is like stage acting; the rhythm of speech is inseparable from character, timing is everything, and the audience teaches you how jokes work.

“But Twitter forces you to be ruthless with details. When an actor has to drink onstage he uses his voice, body, and scene partners to develop subtle and idiosyncratic ways of doing so.

“A Twitter actor, constrained by space and endless audience distractions, must be more precise, allusive, and surprising. You aren't locked in a dark room with 500 people. There is always another cat video.”

Sherin next moved on to Nixon, at first tweeting Nixon’s own words cribbed from actual transcripts.

“I was outrageously fascinated by the things Nixon said on tape,” he recalled.

But soon he moved on to real-time commentary, channeling the voice and mindset of Nixon.

Given his age – at 34, he was a young teen when Nixon died – and his father’s loathing for the man, the choice of channeling the disgraced president seems surprising. 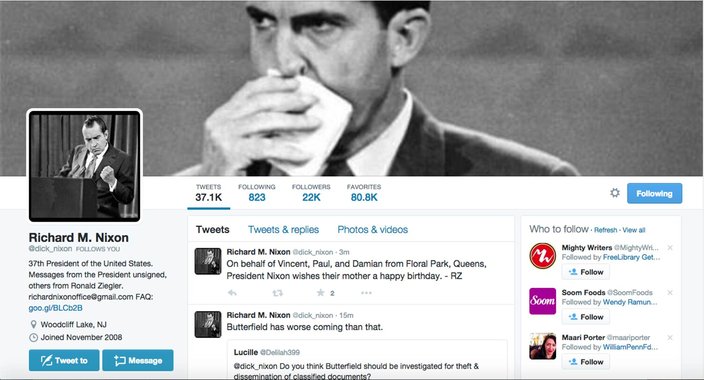 Sherin's done some research on the dead president, but not exhaustively.

“If you do too much research, a character doesn’t live,” he said. “I have a very good idea of what he wouldn’t say or do.”

Mostly, he depends on the response of his online audience to tell him “what works.”

That has clearly worked for him by playing Nixon.

As a veteran Associated Press writer summed up in a profile last year, Sherin’s Nixon feed “is neither tribute nor parody but an uncanny reincarnation that has some Washington insiders and political junkies marveling that someone could so well capture the phrasing, savvy, tenacity, profanity and world view of our 37th president.”

While he had a natural gift for dialogue, tweeting as Nixon has improved Sherin's writing.

He stripped his language down, making it “essential, muscular, direct and more compelling,” while also following the rhythms of the real Nixon’s speech patterns.

“I’m writing a character who hopefully achieves three dimensions in people’s eyes,” he said, adding he enjoys the aspect of simply entertaining that Twitter allows.

Sherin still thinks of himself, essentially, as a Philadelphian, and he returns to the city and the region frequently.

In character as Nixon – his emails read "Office of Richard Nixon" – he often tweets about Philadelphia and its people.

When a veteran 6ABC anchor tweeted about losing trust in Eagle’s coach Chip Kelly, Dick Nixon tweeted: “Losing him on the Philadelphia Eagles is like losing Cronkite on Vietnam.”

“[Bob] Costas just said ‘they only boo the ones they respect’ which means he has never been to Philadelphia,” Nixon tweeted about a dull Red Sox-Yankees game.

During the riots in Baltimore over the death of Freddie Gray, Nixon wrote, “You never saw this in Philadelphia because Rizzo was a man.”

A month later, Nixon followed up: “Philadelphia voted Rizzo's son out? My God.”

And Nixon has weighed in on the mayoral race: “Kenney will be the most purely Philadelphia mayor since Rendell.”

Asked if Nixon has had anything to say about Kenney’s Republican challenger, Melissa Bailey Murray, Sherin responded: “He hasn't – he was a realist, after all.”

And while he supports himself in New York, where he lives now, as a freelance writer who mostly writes advertising, Sherin’s also done more playwriting in the last year, since the Twitter account has taken off.

“It’s like a warm-up for the rest of my writing. But it can be hard to turn off,” adding he makes no money from the Nixon account.

He’s had a warm note from a relative of Nixon. And one of his Twitter followers is Richard Nixon's operative and loyalist, Roger Stone, who famously has a tattoo of Nixon on his back.

Nixon is “an American character. Everyone can project something on him,” explained Sherin, the former president's online spirit voice.