The comedians personify the 'dirtbag left,' and return tonight for a show at Union Transfer 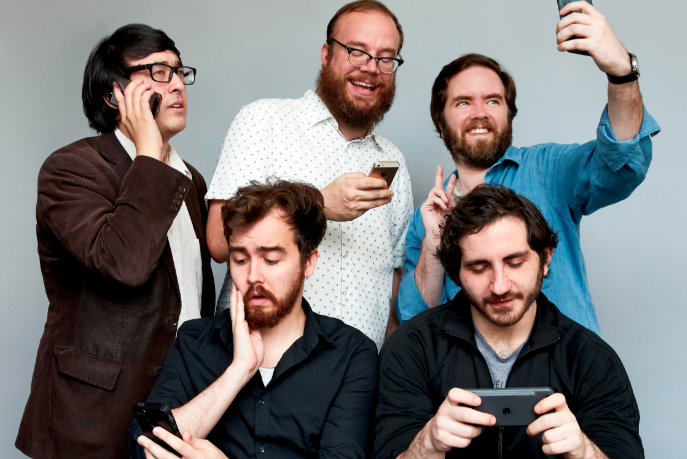 The last time Chapo Trap House, the popular, left-wing humor and politics podcast, came to Philadelphia for a live show, it took place at Everybody Hits Philadelphia on Girard Avenue -- yes, the batting cage -- on July 28, 2016. That same night, about seven miles south at the Wells Fargo Center, Hillary Clinton was on stage at the Democratic National Convention, accepting her party’s nomination for President of the United States.

It was also, Chapo’s Matt Christman said, “The first time I ever felt, somewhere deep inside, that the Democrats were going to lose the election. I immediately banished the thought from my mind.”

RELATED READS: What to listen to: Podcasts about sex, dating, ghosts, and criminals | You can be part of the audience during the 2018 Philadelphia Podcast Festival | Hillary Clinton and Steven Spielberg set to bring women's suffrage story to TV

“It was a cursed evening,” his cohost, Will Menaker, agreed, also referencing the tiresome campaign theme song, “Fight Song,” and a speech the same night from Sen. Amy Klobuchar (D-MN), which included a line about how Clinton “sees a world where girls are not captured and sold but are fearless and bold.”

Just two years later, much has changed. Donald Trump is president. He’s being opposed by Democratic Congressional leaders and a loose confederation of liberals who call themselves “the resistance,” and all sides of that battle have given the Chapo crew ample amounts of material for intense mockery on their podcast.

It launched in the summer of 2016, but in the Trump era, Chapo Trap House has become one of the most popular podcasts, ranking No. 2 on Patreon’s top 50 creators list with more than $100,000 in pledges per month. The show has helped galvanize a bold, humor-inflected leftism that’s on the rise around the country, one they call the “dirtbag left.”

The Chapo hosts have a new book, The Chapo Guide to Revolution: A Manifesto Against Logic, Facts, and Reason. And now they’re on tour, including a Philadelphia stop for a sold-out live show tonight that’s not being held at an incongruous batting cage, but rather at Union Transfer.

And while the hosts crashed with friends two years ago -- “I think there were 30 rabbits grazing about the living room” said one crew member -- the show’s success has meant upgraded accommodations. Once of them said he’s “a little worried it won’t be as fun.”

Last week, PhillyVoice talked to four of the Chapo Traphouse cohosts -- Menaker, Christman, Felix Biederman and Virgil Texas -- about the live show, the podcast’s success, and why Philadelphia is a Chapo town.

Q: You’ve implied on the show before that Philadelphia is a Chapo kind of town. What is it about Philly that it’s especially in line with the Chapo worldview?

A: The last time we were in Philadelphia was for the DNC, and we had an absolute blast. It’s a city that does adhere to the dirtbag ethos -- because of the TV show ["It’s Always Sunny in Philadelphia"] that’s been widely known.

Q: Can we expect to see any special guest stars at the show?

A: Let’s just say that The New Yorker Festival’s loss is our gain.

Q: How important do you think humor is to the success of the left?

A: I don’t think it’s part of the solution, I think that would be far too grandiose a way of talking about what we do. Humor and satire is what I use to mock and deflate the figures that I find risible. It’s certainly not anything that’s driving it.

I think it’s a commentary on our current circumstance when our comedians are giving you news, and the news is telling us jokes.

Q: We haven't seen the Carl Diggler character in awhile [Diggler was a satirical pundit character, created by Biederman and Texas, during the 2016 election] -- is that over?

A: It’s over. Sorry to bear the bad news.

Q: A highlight of the show is the appearances by James Adomian, and his impression of [Trump advisor-turned-Fox News fixture] Sebastian Gorka. How did that come about?

A. He pitched to us. He was on the show a few times before he did Gorka. He said I do Gorka -- I want to do a Gorka impression. What I love about it is each time it gets more and more insane, and the real Sebastian Gorka is undoubtedly aware of it.

Q: Anything else we should know heading into the show on the 11th?

A: The show is sold out, so I guess this article is totally irrelevant. But, we wrote a best-selling book, and it will be available for sale at the show.

The Chapo Trap House book, Chapo Guide to Revolution: A Manifesto Against Logic, Facts, and Reason, is available now. The Chapo live show is on Tuesday, Sept. 11, at Union Transfer.