Time has run out on the Woodstown project, but organizer and supporters want to keep it up through summer months 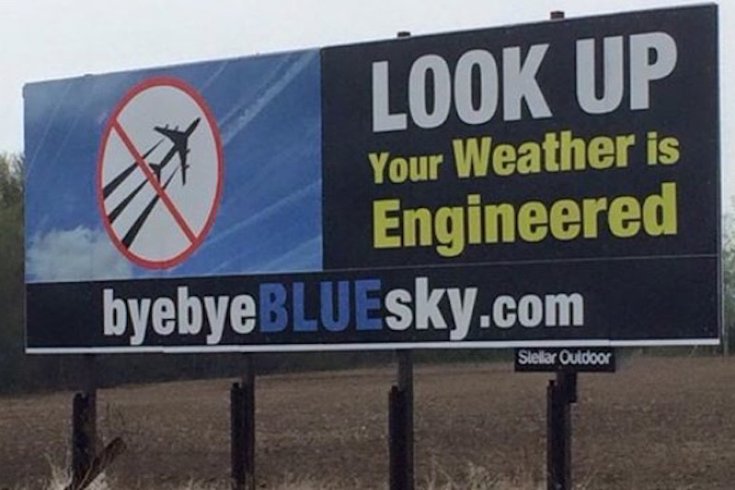 A South Jersey billboard seeks to educate passersby about 'chemtrails,' a theory that a secret group aims to control minds and weather through clouds in the sky.

Rather than rehashing the issue and the billboard’s backstory here, this hyperlink will provide you with all the supporting data necessary to get up to speed.

Got all that? Good.

Fast forward to Friday morning, and the email inbox contained a message from reader Kathleen Roberts, who was grateful for the article as it’s “so important to this cause.” She runs a Facebook page called "Billboards for Clean Skies," which she said gives "activists a forum for strategizing about putting up anti-geoengineering billboards in their communities."

"This is serious business and the powers that be are out to make us look ridiculous." -Sharon LePere, chemtrail activist

Roberts also shared a new online fundraiser being held in the hopes of keeping Sharon Marsh LePere’s billboard messaging woke through the summer. It was created Tuesday and – as of Friday morning – had drawn $600 of the $1,400 goal.

This new effort, said LePere, who also emailed on Friday, is necessary because, like clouds in the sky, the first-of-its-kind sign’s time has drifted past.

Over Facebook instant messaging on Friday morning, LePere explained that her billboard sign recently came down in Woodstown, Salem County, but she hopes to return it to that same location next month, provided someone else doesn't reserve it before she raises enough money.

"It has been worth its weight in gold as far as bringing awareness," she said of the location.

“I would love to get this billboard back up as soon as possible as it has gotten much attention!” wrote LePere, who describes herself as a mother, grandmother and chemtrail activist. “Positive things have come about from this great location. I will say more in an update, as I don't want to jinx it.”

"I would just like people to realize that this should not be brushed off lightly and that they should do their own research before judging it as a conspiracy theory," said LePere, who lives in Swedesboro. "This is serious business and the powers that be are out to make us look ridiculous."

Though I closed Thursday's piece noting I was skeptical of these claims' veracity, I remain woke enough to pass it along publicly.