Chip Kelly clarifies what he means by 'a lack of execution' 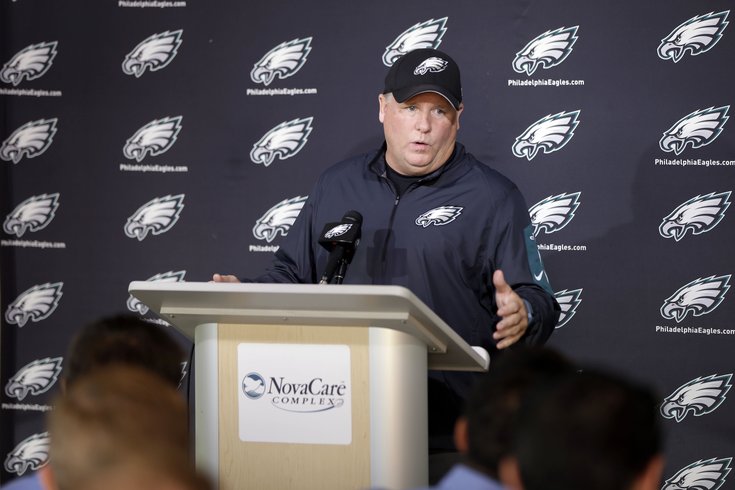 "We need to execute the plays better. That's what we need to do."

On Monday, those were the words Chip Kelly chose to explain away not just the Eagles' 23-20 loss to the Redskins, but his team's 1-3 record as well.

By Wednesday -- he didn't speak with the media on Tuesday -- Kelly's tune had changed. No longer was he putting the blame on the players' lack of execution, but shouldered some of the responsibility himself in a way that has become all too familiar to Eagles fans.

"We've got to put them in a better situation with plays and specifically during play-calling," Kelly said during his second press conference following the Washington loss. "We have to do a better job from that standpoint."

The only thing missing was a sweet and sour pork reference and, of course, a good ol' "time's yours."

But now it's Thursday, and the focus should have shifted to the Eagles' upcoming matchup against the Saints. Still, a large percentage of the questions directed at the coach during his final availability before Sunday's game had to do with execution, DeMarco Murray's carries and who is at fault for their 1-3 start.

Kelly used that opportunity to cast an even wider net of blame. No longer is it just on the players and coaches. Apparently everyone in the organization must take some of the blame, from the smoothie maker right on up to owner Jeff Lurie.

"Execution is all of us," Kelly said. "[That I only meant the players] is just your interpretation of it. It's always on our shoulders. If we don't win, I think every person in this organization take responsibility. That's one thing we pride ourselves on. We don't make excuses.

While that may be true, it's quite different than what the Eagles coach was saying a few days ago, when he was talking about dropped passes, missed blocking assignments and, most notably, Caleb Sturgis' missed field goals as the reasons the Eagles have three losses instead of three wins.

"We stress that with the entire team," Kelly added. " Just like it's not one individual player that is the reason we lost. There was a lot of us that could have made another play, and if someone, just one of us, made a play, we'd have a shot to win the football game."

Chip Kelly said that he doesn't yet have a sense of how OL will look Sunday. Lane Johnson and Jason Peters will do some stuff today. #Eagles

Lane Johnson (knee) and Jason Peters (quad) were indeed out on the field for the early part of practice that was open to reporters.

Injured cornerback Byron Maxwell (quad) was also out on the field. The only players without helmets on during the open practice periods were Mychal Kendricks (hamstring), Kiko Alonso (knee) and Brandon Bair (groin). Maxwell and Peters practiced for the first time this week, while Johnson was limited on Wednesday.

Chip: Sean Payton is a great coach because he adjusts to his personnel and caters his system to his players. pic.twitter.com/p6Cd3UWPqF

If Kelly is able to appreciate that as a quality possessed by some of the great coaches, why does he seem so stubborn to change his system to fit his players?