Chip Kelly likely to remain Eagles' coach in 2016, per report 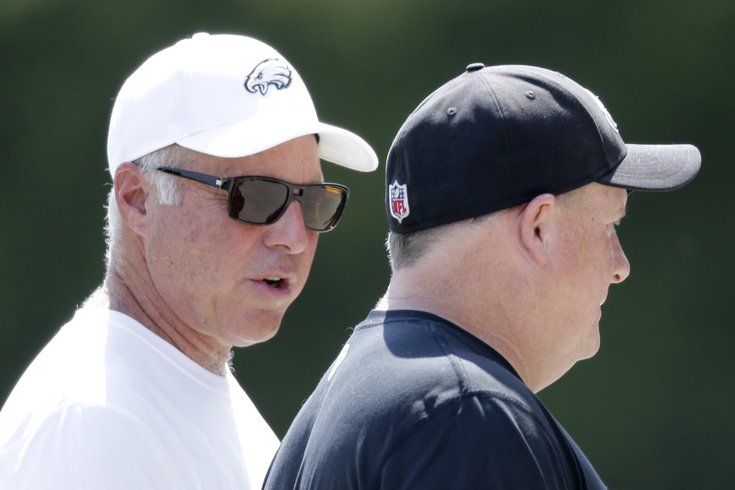 Jeff Lurie is a big fan of his holiday parties.

Despite months of rumors and speculation, Chip Kelly is likely to be back with the Eagles next season, according to team and league sources, and ownership has no plans to move on from him. If Kelly were to depart -- and college does have a certain allure to him, though it would have to be the perfect situation -- it would come as a surprise at this point. The coach reiterated his dedication to his players last week and owner Jeffrey Lurie is still a strong proponent of Kelly.

Lurie, though aware of some of the discord in his locker room, is not mulling a change at this point, even after two blowout losses the last two weeks, according to sources close to the owner, and that is unlikely to change down the stretch. Lurie is very loyal and believes in Kelly long-term, even if players have their concerns, and he did not hand Kelly total control to the roster a few months ago to consider launching a new search for a coach and GM now. That process holds no attraction for him, and while he is displeased by the disappointing results the last three weeks and Kelly's inability to identify a quarterback of the future, he remains optimistic that a quick change could be on the horizon, particularly in a division as suspect as the NFC East.

After the Philadelphia Eagles' embarrassing losses to the Dolphins and Buccaneers, many thought the Eagles had hit rock bottom ... until they were blown out in front of a national audience in Detroit on Thanksgiving. Can it get worse? The final five games will tell us.

There are plenty of reasons to move on from Kelly if there isn't a drastic turnaround this season, which we enumerated last week.

La Canfora's report reads as though Lurie just kinda doesn't feel like going through the process of hiring a new head coach and general manager. Obviously, if that is the case, that is an unacceptable approach no matter how you feel about Kelly as a head coach. Furthermore, the state of the NFC East should not factor in one iota. The focus should be 100 percent on the Eagles and their quest for a Super Bowl, not how good or bad the rest of the division is at the moment.

As for actual football reasons, the Eagles should stick with Kelly becaaaauuuusssse...