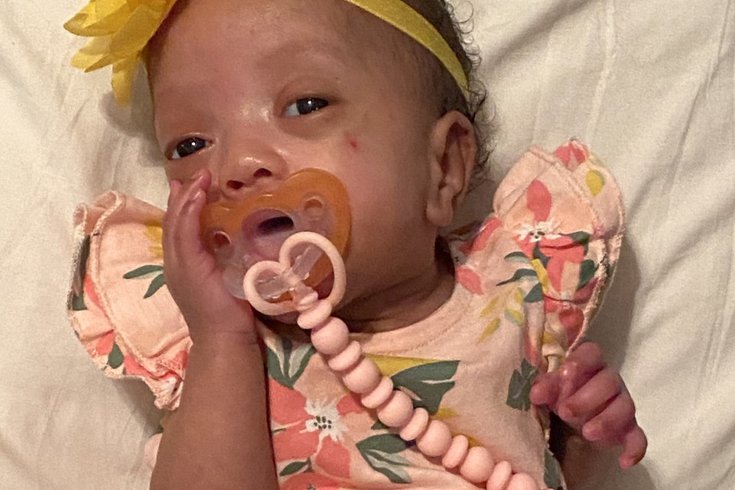 Yasmin Southerland was told at her 20-week ultrasound that Carter, above, had the most severe form of spina bifida. But CHOP surgeons were able to successfully close the opening in Carter's spine while she was in the womb.

The Children's Hospital of Philadelphia recently celebrated the birth of its 2,000th fetal surgery patient, a milestone more than 25 years in the making.

CHOP has been a leader in fetal surgery, which repairs birth defects to babies still in the womb, since its Richard D. Wood Jr. Center for Fetal Diagnosis and Treatment opened in 1995. Through the center, CHOP has cared for more than 27,000 expectant parents from all 50 states more than 70 countries.

"Forty years ago, fetal surgery was considered experimental, but now it has become the standard of care, offering a better quality of life to many children and families," said CHOP Surgeon-in-Chief Dr. N. Scott Adzick, the center's founder and director.

"A quarter of fetal surgeries ever performed have been done at CHOP, and we continue to refine our techniques so that we can improve even more patients' lives."

Every week, CHOP surgical teams conduct fetal surgeries not only to repair spina bifida and other birth defects, but also to remove fetal tumors and treat complications in fetal twins.

Carter's journey into the world marked an important milestone for both her family and the CHOP doctors who treated her.

Yasmin Southerland was told at her 20-week ultrasound that Carter had myelomeningocele, the most severe form of spina bifida, a birth defect that affects neural tubes along the spine.

When these tubes don't close all the way, the backbone isn't able to fully protect the spinal cord and nerves from damage. That can lead to physical and intellectual disabilities, including paralysis and loss of bladder and bowel control, according to the U.S. Centers for Disease Control and Prevention.

Yasmin and Carter's father, Malcolm, live in Kernersville, North Carolina, but through the help of local specialists and by doing their own research, they learned about the work CHOP was doing in this area. They decided to travel 450 miles to have the surgery.

"I didn’t even know it was possible to perform surgery while she was still in the womb," Yasmin said.

Yasmin was 25 weeks pregnant when the CHOP surgeons successfully closed the opening in her daughter's spine. Two weeks later, Carter was born prematurely. She spent three months in CHOP's Newborn/Infant Intensive Care Unit before being transferred to a hospital closer to the family's home. But she has been at home since June 2.

"Even though we were far from home, we are so glad we came to CHOP because we had an amazing experience," Yasmin said. "I was very nervous before the surgery, but ultimately I wanted to do whatever I could do to improve Carter's prognosis. Now that her surgery was a success, I feel more empowered to deal with any challenges that come up in the future, especially knowing that I have CHOP in my back pocket."

The leaders of CHOP's Center for Fetal Diagnosis and Treatment have been working with other scientists to develop experimental techniques to use in vivo since the founding of modern fetal medicine.

The first open fetal surgery was performed in 1980 by pediatric surgeon Dr. Michael Harrison, who founded the Fetal Treatment Center at the University of California, San Francisco. At the beginning, it was a controversial field because of the potential risks to the expectant mother and her fetus.

Because open fetal surgery carried a high risk to the expectant mother and her child, the invention of minimally invasive surgical techniques opened the doors for more types of fetal surgery to be performed successfully.

CHOP led the groundbreaking MOMS study in 2011 that first demonstrated that fetal repair of spina bifida offered more benefits compared to postnatal repair, including the increased likelihood that the child would be able to walk independently and have fewer gross and fine motor deficits.

The study also found fetal surgery decreased the need for shunting to divert fluid from the brain.

A decade later, CHOP researchers were involved in a follow-up study that confirmed the physical functioning benefits of prenatal repair continued into the child's school years. Their findings were published in February in JAMA Pediatrics.

Even with today's refined surgical techniques, surgeons and expectant parents need to weigh all the benefits and risks, fetal surgical experts emphasize.

One possible complication is the preterm rupture of membranes, which can lead to preterm delivery. Other risks include rupture of the uterus after surgery, fetal death, operative complications and early labor.

The future of fetal surgery lies in stem cell and gene therapy, some researchers say. Based on animal studies, stem cell transplantation before the fetus' immune system has fully developed is thought to potentially boost the natural repair of defects.