In a vacuum, a 98-92 overtime loss to the 35-17 Los Angeles Clippers is not a terrible result for the Philadelphia 76ers, even without Blake Griffin. But after considering that the Clippers shot 36.8 percent from the field and watching the Sixers’ terrible late-game offensive execution, it feels like a major giveaway.

After this one was over, there was no debate over which side of the floor needed to be addressed. The Sixers scored 33 points in the 29 minutes after the halftime break. Their defense was almost good enough to carry a John Chaneyesque, iso-heavy offense (without the shots going in) to the finish line, but J.J. Redick hit a critical tying three-pointer with 10 seconds left.

“I thought that our offense let us down in the second half,” Brett Brown said, while also giving some credit to the Clippers’ 10th-ranked defense.

“Ish [Smith] had the ball a lot, he was trying to save the day,” he added. “We needed more movement. They did a good job of switching out, they were really hard to get good looks on.”

Smith came into the game with an insane 38.7 usage rate (percentage of possessions that end with a player’s shot, free throw, or turnover) in fourth quarters since joining the Sixers, and that number likely rose tonight. With fellow Wake Forest Chris Paul product hounding him defensively, we saw the ugly side of Ish Hero Ball. 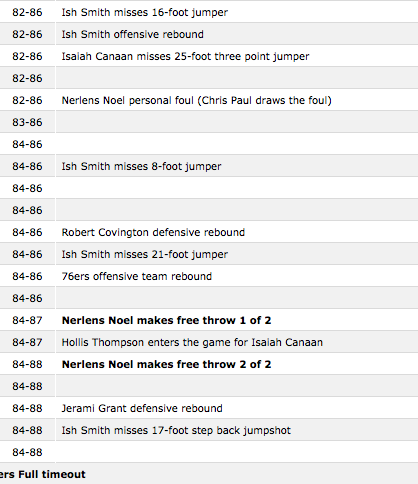 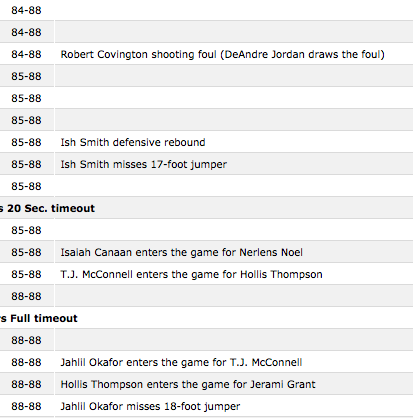 There was nothing good about the Sixers’ late-game offense. It was like a Saturday Night Live episode where all of the throwaway sketches are lumped together at the end. Not only did Smith miss all of those shots, but most of them weren’t especially close. The Process was bad, too: The ball stuck in Smith’s hands, everyone else of the floor was stagnant, and he was forced to create shots late in the clock time and again.

To his credit, Smith took his share of responsibility for the poor execution down the stretch. Afterward, the lightning quick point guard felt that even if the final shot eventually came back his way, the ball could have moved more early in possessions.

“Just moving the ball — swing it, swing it — and then coming back to you and getting in the pick-and-roll,” Smith offered as a possible solution.

The fact that the Sixers were even in the game seemed like a minor miracle. The Clippers have played well without Griffin by spreading the floor around a Paul-DeAndre Jordan pick-and-roll, and they lost their five games against Lob City during the Hinkie-Brown era by an average of 28.8 points. The Sixers don’t match up well with anyone, but like Atlanta and Boston, they really don’t match up well with the Clips.

And yet, they went out there tonight and defended them pretty well. Okafor sagged off familiar face Luc Richard Mbah a Moute into the lane, Nik Stauskas and a few others chased J.J. Redick around screens, and Noel dealt with the CP3-DeAndre pick-and-roll. Los Angeles missed a good amount of open shots, but this has been an elite offensive team for years. They are going to create at least some good looks.

“In general, we played really good defense, and this team is getting better,” Brown said.

Jerami Grant and Hollis Thompson were excellent off the bench. Grant (17 points, 6-7 FG, 5-7 FT, 11 rebounds) notched his third career double-double simple by being the most active player in the paint. Thompson (16 points, 5-9 FG, 4-6 3P) displayed some excellent shot-making even when the offense became static.

“It’s a hell of a way to lose, [but] we will learn from this,” Brown said. “All over the place, situations are fantastic for our guys to look at and grow from.”

While there is at least some truth to that statement, I do wonder how much growth can be taken from a game where Smith attempts 24 shots. The 27-year-old has helped save the season from being an embarrassment of epic proportions, but nobody is mistaking him for the team’s point guard of the future.

If Okafor, Noel, Robert Covington, etc. don’t even have a hand in the team’s offense in close games down the stretch, what are they being prepared for? It’s not an easy question to grapple with, but that is what Brown is paid to figure out.