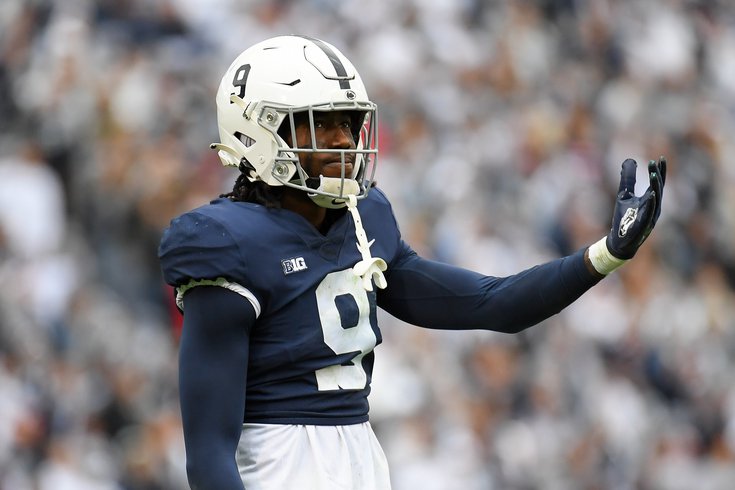 Tucker rushed for 1496 yards and 12 TDs in 2021, breaking Syracuse's single-season rushing record. He added 20 receptions for 255 yards and 2 TDs. In two games so far in 2022, he has 212 rushing yards, 101 receiving yards, and 3 total TDs. He has a track background and very good initial acceleration, as you'll see below.

For a speedy back, I like that he's also a "one cut and go" style of runner who can run through arm tackles and is usually going to get at least what is blocked up for him, and sometimes more.

The Eagles could be in the market for all different styles of running backs next offseason, so we'll probably profile a variety of them.

Porter has incredible length, as he reportedly has 35-inch arms to go along with his 6'2 frame. 35-inch arms are good for an offensive tackle. They're insane for a corner. In addition to his God-given size, Porter is also a good athlete.

He is also the son of Steelers great Joey Porter Sr., and he plays with a similar type of passion and edge as his dad.

Porter only has 1 career interception (15 pass breakups), so ideally you'd like to see more production, but he is going to get first-round consideration because they just don't make many corners with his size. If he can show some ball-hawking ability in 2022 he'll be a first-round lock.

Let's go ahead and post our Jalen Hurts disclaimer whenever we profile a quarterback:

Jalen Hurts has every opportunity to succeed as the Eagles' quarterback in 2022, and I believe that he will. It feels more likely than not that Hurts will return as the team's starter in 2023. But let's be real. The Eagles are going to pay close attention to the 2023 quarterback class, and if they think they can upgrade on the most important position in the sport, and they have the ammo and opportunity to do that, they will.

I'll also add that the Eagles could be in the market for a backup quarterback, as Gardner Minshew will no doubt explore potential starting opportunities in free agency next offseason. Boom, OK, covered.

Van Dyke is only a redshirt sophomore who only has 11 career starts. If he comes out after this season, he will have significantly less experience than other quarterbacks in the draft.

Johnson is a versatile defensive back who plays slot corner, safety, and some linebacker. He lines up all over the defense as sort of chess piece in Texas A&M's defense. He's a physical tackler who can match up against bigger slot receivers as well as tight ends on obvious passing downs. He also has some value as a blitzer from the slot.

Texas A&M Antonio Johnson is one of the best defensive weapons in college football! pic.twitter.com/Mm4nLD2K6f

Johnson is being comped to 2022 first-round pick Daxton Hill, which makes some sense. From an Eagles perspective, he does a lot of the same types of things as Chauncey Gardner-Johnson.

Hedley was a 2021 Ray Guy Award semi-finalist in a year that four punters got drafted. He's a big, 6'4, 220-pound Aussie who has averaged over 45 yards per punt over his career. You want to watch punter highlights? Of course you do!

Hedley (D.O.B. 6/27/93, according to this site) will be 30 years old before he ever punts in the NFL if he gets that opportunity, so teams might not be interested in using a draft pick on him. BUT... his son lives in Philadelphia, which would make the Eagles an appealing landing spot should he go undrafted, and the Eagles decide to give Arryn Siposs competition in 2023.