Eagles vs. Vikings: Predictions, betting odds and more for Week 2

Will the Eagles have the rust shaken off for Minnesota? 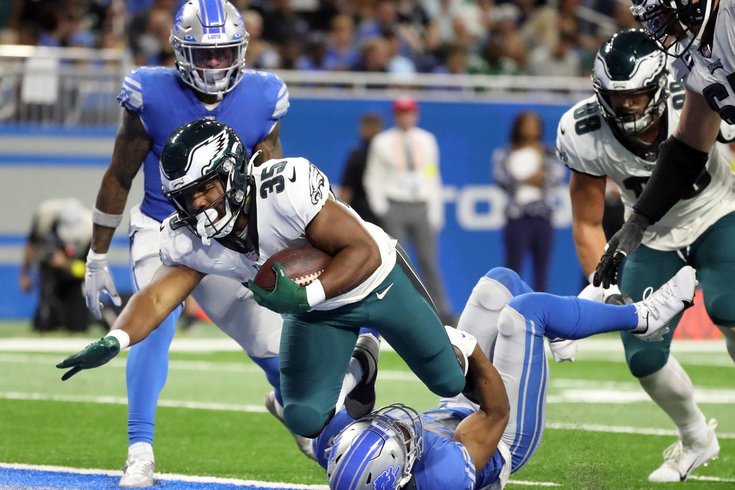 Eagles RB Boston Scott pushes through to the end zone for a touchdown last week against Detroit.

Week 2 brings the Eagles home to the Linc under the stadium lights for Monday Night Football, and they're ready for the place to be rocking.

The Eagles beat the Lions 38-35 in their season opener but came out of it with a handful of concerns – mostly a sloppy second-half performance from the defense – that the coaching staff vowed to clean up postgame and throughout the week.

They're going to need their act together against the Vikings, who dominated Green Bay 23-7 in their Week 1 opener, highlighted by a huge day from star receiver Justin Jefferson.

This will be a big test for the Eagles early. Clearly, the offense can put up points, but can the defense lock down on the Vikings, or at least contain them enough, to walk away 2-0?

Here's what our writers think...

Say what you will about Kirk Cousins, but he's the exact type of quarterback who can shred this Jonathan Gannon soft coverage defense, and he has premier playmakers around him in Justin Jefferson, Adam Thielen, and Dalvin Cook. Even the Vikings' offensive line, once the Kryptonite of this offense, seems to be improved after the team has spent heavy draft resources on that group over the last half decade.

The Eagles' offense should score points, as the Vikings' best defensive feature — the pass-rushing duo of Danielle Hunter and Za'Darius Smith — should be neutralized by Jordan Mailata and Lane Johnson. But it won't be enough. I'll believe that Gannon's defense can slow a competent offense when I see it, and I haven't seen that yet.

This is a strategic choice to be a loss for the Eagles. First off, the defense looked bad against the Lions, and I have very little faith they will have better success slowing down Dalvin Cook and Justin Jefferson. I also think the Eagles are not quite good enough to be 17-0 this season, and looking at their schedule with fresh eyes after Week 1... I honestly don't know if they have a better team on the schedule than the Vikings.

The schedule looks even weaker than it did before, and Minnesota could be their first real test for a while if Dak Prescott misses the Cowboys game in a few weeks. I expect the Vikings to win in a shootout and then the Eagles to win a bunch of games in a row shortly after.

If I didn't pick this exact score, I would lose my long-time hardcore readers.

I can’t seem to shake the nagging feeling that the Eagles are going to lose this game. Philadelphia’s defense is probably not as bad as they looked at times in the opener against Detroit, but they’re up against an offensive group that strikes a bit more fear in your heart than the Lions did. Justin Jefferson has proven to be a nightmare for anybody to contain during his time in the league, and I’m prepared for him to have an absolutely monstrous night to drive home the draft night mistake that put him in Minnesota to begin with. I expect the pass rush to be better almost by default this week, but it still may not be enough.

Philadelphia’s lack of offensive balance in Week 1 also concerns me, even if we can say it was justified with the type of performance AJ Brown had to open his Eagles account. The raucous crowd I expect for this one gives me pause picking against the Birds, but the fans don’t actually play the games, and I have trust issues on both sides of the ball at the moment. Here’s hoping we get a fun shootout.

The Vikings have had the Eagles' number since the '17 NFC Championship and if any of the defensive sloppiness from Week 1 carries over into Monday night, I don't see that changing. Minnesota has way more going for its team than Detroit. Dalvin Cook, Justin Jefferson, and Adam Thielen are a lot to handle for any defense, and Kirk Cousins is more than capable of each getting them the ball.

The Eagles are going to put up points, but my feeling is they won't be able to shut down Minnesota and won't ever be fully in this one because of it.

Week 1 provided a lot of hope with this Eagles offense while frustrating us at the same time with the defense. I’m not even concerned about the players as much as I am about the coordinator. But… being the optimist that I am, I’ll give Jonathan Gannon another shot, mainly because this is a perfect spot to get that shot.

Gannon was all the hype – for some unknown reason – at the end of last year as a top candidate to be a head coach. Once the rest of the NFL world caught on, that quickly fizzled. One of those teams that caught on was the Vikings, electing to go with their current coach instead. This is as much of a revenge game – or middle-finger game – that Gannon would ever provide. If he can’t get his defense up for this game, it’s time.

Philadelphia is playing a Vikings team that has this lone road game in the middle of a division stretch at home. Easy for Minnesota to overlook this one.

The average fan likes sizzle so the narrative is easy. If Jared Goff, D'Andre Swift, Amon-Ra St. Brown, and Josh Reynolds put up 35 points, what the heck are Kirk Cousins, Dalvin Cook, Justin Jefferson, and Adam Thielen going to do?

The answer is not as well despite Minnesota having significantly better weapons. Week 2 means the Vikings are dealing with the raucous road environment, not the Eagles, and the Achilles heel for Minny remains the interior of the offensive line. Those two tweaks to the formula should be enough for a bit of a market correction on defense for Philadelphia and don't undersell Cousins' notorious difficulties on Monday night, which tends to be a self-fulfilling prophecy more often than not.

The bet here is Jalen Hurts makes a big play in the fourth quarter to put the Eagles over the hump in a close game: 24-23 Eagles