Colonials beaten - again - by the red coats in Haddonfield skirmish

238 years later, the rebels were rousted one more time 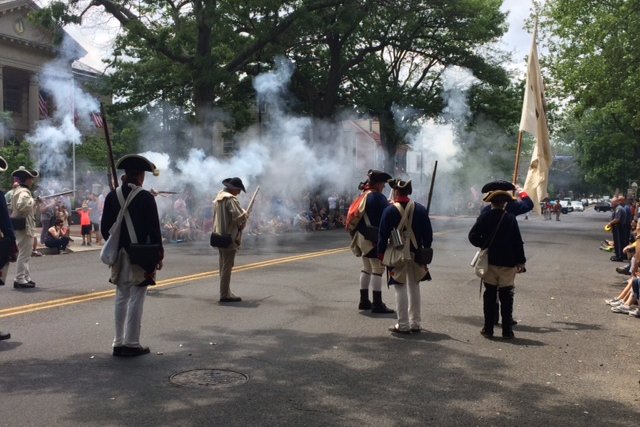 Bad news yet again: The colonials took a beating Saturday during the reenactment of a skirmish on Kings Highway in South Jersey's Haddonfield.

It was the fourth re-enactment of the small battles that marked the march of redcoats from Philadelphia into what was then West Jersey, then northeastward toward New York in mid-June of 1778. The end result was the Battle of Monmouth, something of a draw since the Brits managed to successfully withdraw to New York, but the revolutionists showed they could stand toe-to-toe with the king’s forces.

The staged skirmish Saturday took place on King’s Highway, one of Haddonfield's main highways, just in front of the Indian King Tavern, a tavern used alternately by the red coats, their Hessian mercenaries and the continentals. Situated in a well-preserved colonial cross-roads town, the tavern served as a meeting place when New Jersey declared itself a state, not a colony.

All of which is what brought Tom Hazlett, 39, and his son, Nathan, 8, to witness the staged battle.

While Nathan has not had much formal schooling about colonial history yet in school, the Hazletts lived in the historic district of Center City and routinely walked by and visited examples from Philadelphia’s rich colonial past.

That helped guide the family to Haddonfield when they relocated for better schools.

“This is what Haddonfield is all about,” said the elder Hazlett, a lawyer, gesturing to the many examples of the the borough's colonial past visible in the downtown.

His son has developed his own interest in history as a result of his early exposure and talks about history.

Nathan said he likes history and superheroes about equally, a major thing at the age of eight. However, it was his dad who was wearing the Batman t-shirt to the reenactment.

The pair were talking about the wider meaning of the war as they walked away from the 20-minute-long staged battle.

“The annual skirmish in Haddonfield is a great opportunity for New Jersey residents to learn about our state’s rich American Revolutionary War history,” said Parks and Forestry Director Mark Texel. The state operates the tavern, preserved by the state in 1903.

The site is also supported by the Friends of the Indian King Tavern Museum.

Their president, Joe Murphy, said, “It’s a tremendous event. Here, it’s done in a town setting that’s remarkably similar to what the town would have been like in 1777. That’s really special.”

The Partnership for Haddonfield simultaneously hosted its second annual Service Appreciation Day, with the Liberty USO, a remembrance site and photo wall.