Pass-rusher, philanthropist and indie mind talks about his work in Philly music scene 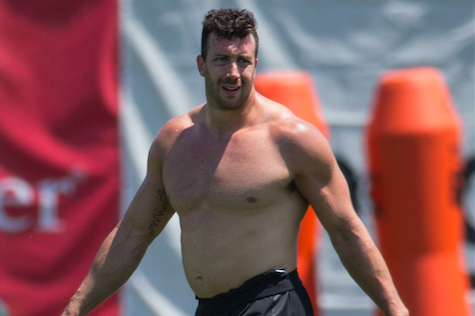 Philadelphia Eagles outside linebacker Connor Barwin (98) looks on with his shirt off during practice at NFL football training camp, Sunday, Aug. 2, 2015, in Philadelphia.

It can be hard for diehard Eagles fans to fathom sometimes, but the players on Philadelphia's beloved football team have active lives outside the game — and it's not always of the Manziel and Hardy variety! In many cases, it's not even in the realm of DeSean and LeSean-level off-field distractions.

Malcolm Jenkins makes bowties, for instance, and Benny Logan slays alligators — you know, normal people stuff. But the biggest man about town on the Eagles roster is undoubtedly defensive end Connor Barwin, whose well-known devotion to indie-rock music has supported charitable endeavors through his Make the World Better foundation.

Teaming up with Union Transfer last summer, Barwin brought on artists including Parquet Courts and Mac Demarco to raise more than $300,000 for the revitalization of South Philadelphia's Smith Playground.

Just this month, Barwin planted Bud, a very swell Sweet Bay Magnolia, in the backyard of a Fishtown family for the #TreeTrekPhilly contest, sponsored by Parks and Recreation and the Fairmount Park Conservancy. In the past, he's vouched for the Bicycle Coalition of Greater Philadelphia and his abiding voice has even emanated from speakers on SEPTA platforms.

In a new interview with Pitchfork, Barwin talks about his introduction to the music scene in Philly and what it's like to be an Eagle interacting with its most notable acts.

Here's who does and does not care about the Eagles:

• Kurt Vile, our psych folk pride: "No interest in the Eagles, which is hilarious."

• Yeasayer's Ira Wolf Tuton, fresh off a new album: "Huge Eagles fan. He can’t help but get into Eagles conversation every time we talk."

• Alex G, soloist darling and lo-fi maestro: "Alex G is not an Eagles fan, but at his show, someone in his band was f---ing around doing 'E-A-G-L-E-S EAGLES!' chants."

Barwin should really get the three of these guys together to record a fire track for the Eagles, kind of like last year's Dr. Dog ode to the Phillie Phanatic.

Check out the rest of Barwin's interview over at Pitchfork.