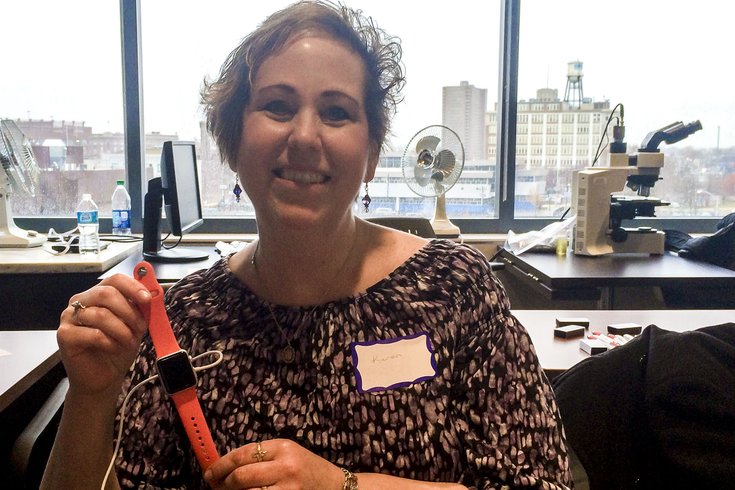 Karen Schaefer pledged when she was diagnosed with cancer 10 years ago that if God enabled her to live, she would find ways to give back.

So when Schaefer was offered an opportunity to join a breast cancer research study, she said yes – even if it meant wearing an Apple Watch and using a smartphone for the first time.

"I promised God in the beginning that if I was able to survive, I would definitely give back," said Schaefer, a Sicklerville, New Jersey, resident who has battled breast, liver and brain cancer. "Every opportunity I have to give back, I definitely do it."

Schaefer, 49, is among 30 breast cancer patients participating in a medical-behavioral health pilot project at Cooper University Health Care's MD Anderson Cancer Center. The patients will wear Apple Watches and use Polaris Health Directions' emPOWER app to track behavioral data that could improve their own quality of life – and that of other breast cancer patients.

"Cancer care has moved to a very individualized approach to care," said Cori McMahon, Anderson's director of behavior medicine. "If we can best understand what they're going through, we can be much more efficient with helping them get the care."

The patients are being split into two cohorts of 15 people. The first cohort received their free Apple Watches on Tuesday during a kick-off event that included an equipment tutorial and program overview. Patients who did not own an iPhone, necessary for utilizing Apple Watch, also received a free iPhone 5S.

During the nine-month study, the patients will use the emPOWER app to capture sleep information, physical activity levels, mood and other measurable health data. Some data, like heart rate and steps, can be collected simply by wearing the Apple Watch. Other data, like mood levels, will be tracked through daily surveys.

The information can be sent daily to the patient's health care provider, potentially enhancing communication between the patient and medical care providers. The patients also will be able to communicate with each other by using the Apple Watches to send messages, creating a virtual support group.

The hope, McMahon said, is that breast cancer patients will begin to feel less like a passive recipient of medical care and more like an active participant in their treatments.

"When someone is diagnosed with cancer, they feel like they've lost control of their lives," McMahon said. "We're hoping that this kind of active participation on a daily basis will help them feel like they've regained some control in their treatment process."

Patients will receive a weekly graphs showing their body's responses, enabling them opportunities to learn from their own behavior. For example, they might decide to walk more after recognizing correlations between their mood level and the amount of exercise they get.

"I hope this will make me more active," said Phyllis Derlof, a breast cancer patient from Sewell, Gloucester County. "I am active, but with the treatments, it makes me tired."

Polaris, a health technology and analytics company based in Wayne, Chester County, designed the emPOWER app specifically for the pilot project. But the company hopes to broaden its use to include other patients.

"It's also going to help us as researchers be able to see what people's preferences are and what they're doing so we're able to build a better app that may go beyond breast cancer," Polaris' Science Director Tina Harralson said. "It could go to other oncology patients and possibly to other chronic disease patients – diabetes, heart disease, cardiac rehab."

Schaefer admitted that using the Apple Watch felt a bit scary, because she does not regularly jump to use the latest technology. But she was encouraged by the possibilities the program created for her treatment.